Triangle with largest perimeter in a convex region

What is the largest value of $r$ such that the following statement is always true?

"Let $C$ be a convex region with area $1$. There must exist a triangle contained in $C$ whose perimeter is at least $r$."

I don't need the actual largest value of $r$, but a lower bound would be nice. Using the fact that any convex region with unit area must contain a line segment of length $2/\sqrt{\pi}$, it is clear, for example, that $r\geq4/\sqrt{\pi}$ .

$\bullet$ Every convex region of area $1$ contains a triangle of area at least as large as the area of the equilateral triangle inscribed in the circle of area $1$. Moreover, if the region does not contain a triangle of larger area, then it is an ellipse. [E. Sas, Über eine Extremaleigenschaft der Ellipsen, Compositio Math. 6 (1939), 468–470]. (Actually, Sas proves a more general statement, for $n$-gons with $n\ge3$.)

$\bullet$ Among all triangles of a given area the equilateral one, and no other, is of minimum perimeter.

$\bullet$ If the maximum area triangle inscribed in an ellipse is equilateral, then the ellipse is a circle.

Putting it all together:

Theorem. If $C$ is a convex region with area $1$, then there exists a triangle contained in $C$ whose perimeter is at least as large as the maximum perimeter of a triangle inscribed in the circle of area $1$, and if $C$ does not contain a triangle of perimeter larger than that, then $C$ must be a circle.

Here is Ilya's $0.821$-ellipse (if I interpreted his intention correctly), discretized to an $180$-point polygon at $2^\circ$-degree angular increments: 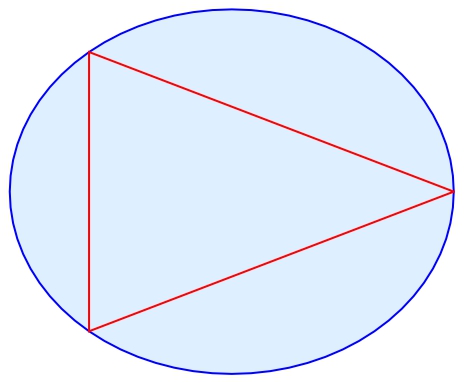 His point, if I may editorialize, is that the naive lower bound of $4/\sqrt{\pi} \approx 2.26$ is not so far from the bound for the optimal ellipse. My computations for this discrete version yield $\approx 2.97$, in fact, slightly larger than $r=3 \sqrt{3/\pi} \approx 2.93$ for the circle. Perhaps I miscalculated...

Not the answer you're looking for? Browse other questions tagged mg.metric-geometry convex-geometry plane-geometry or ask your own question.