On some centers of convex regions based on partitions

These questions are inspired by Yaglom and Boltyanskii's 'Convex figures'.

Winternitz Theorem: If a 2D convex figure is divided into 2 parts by a line $l$ that passes through its center of gravity, the ratio of the areas of the two parts always lies between between the bounds $4/5$ and $5/4$.

Y. and B. also prove that for any triangle, there is no other point $O$ than its center of gravity (centroid) for which the ratio of the partial areas into which the triangle is subdivided by lines thru $O$ can be enclosed within narrower bounds.

Question 1: For any general convex 2D region, is the centre of mass still the point such that the areas into which the region is divided by lines thru that points are closest to each other? If the point we seek is not necessarily the centre of mass, then it could be called the "area partition center" of the region and finding this center for a general given region could be an algorithmic question.

Y. and B. also prove: Let a bounded curve of length $L$ that may consist of separate pieces be given in the plane. Then there is a point $O$ in the plane so that each line through $O$ divides the curve into 2 parts each having a length of not less than $L/3$.

Question 2: If $L$ be the boundary of a single convex region, there must be a point $O'$ in its interior such that any line thru $O'$ divides the boundary into 2 portions such that the lengths of the two portions are closer than $1:3$. What is a bound for this ratio for convex regions?

Let us define the perimeter partition center of a 2D convex region as that point $P$ in its interior such that the 2 portions into which any line thru $P$ divides the outer boundary are guaranteed to be closest to each other in length.

Remark: For an isosceles triangle with very narrow base, this perimeter partition center is close to the mid point of the bisector of its apex angle and so clearly different from the centroid. From this it also appears that when two regions are combined, the perimeter center of the combined body need not lie on the line segment joining the perimeter centers of the constituents (for if it did lie on this line, the perimeter center of any triangle would lie on all its medians and hence on the centroid which is not the case). Note: Even the Center of Area Partition might not have this nice property shown by the Center of Mass.

Question 3: Given a general convex region (even a triangle) to find its perimeter partition center.

Note 1: The perimeter partition center of a 2D convex region can be defined as the interior point that minimizes the departure from 1 of either the ratio between lengths of the 2 outer boundary pieces that result from any line that passes thru that point or the ratio between the perimeters of the 2 convex pieces into which any line that passes thru that point cuts the convex region. The two definitions may give distinct perimeter centers

Note 2: These questions have obvious 3D analogs with volume and surface area replacing area and perimeter.

Let me just quickly remark on one embedded question (but not your main questions):

"then it could be called the 'area partition center' of the region and finding this center for a general given region could be an algorithmic question."

Grünbaum called it Winternitz's measure of symmetry. I addressed with a student the algorithmic question to find what is now generally known as the center of area. The figure below shows contours of chords that cut off a fixed area. Chords through the center of this example cut off about $0.455$ of the area, consistent with Y.&B.'s lower bound of $4/9 \approx 0.444$. 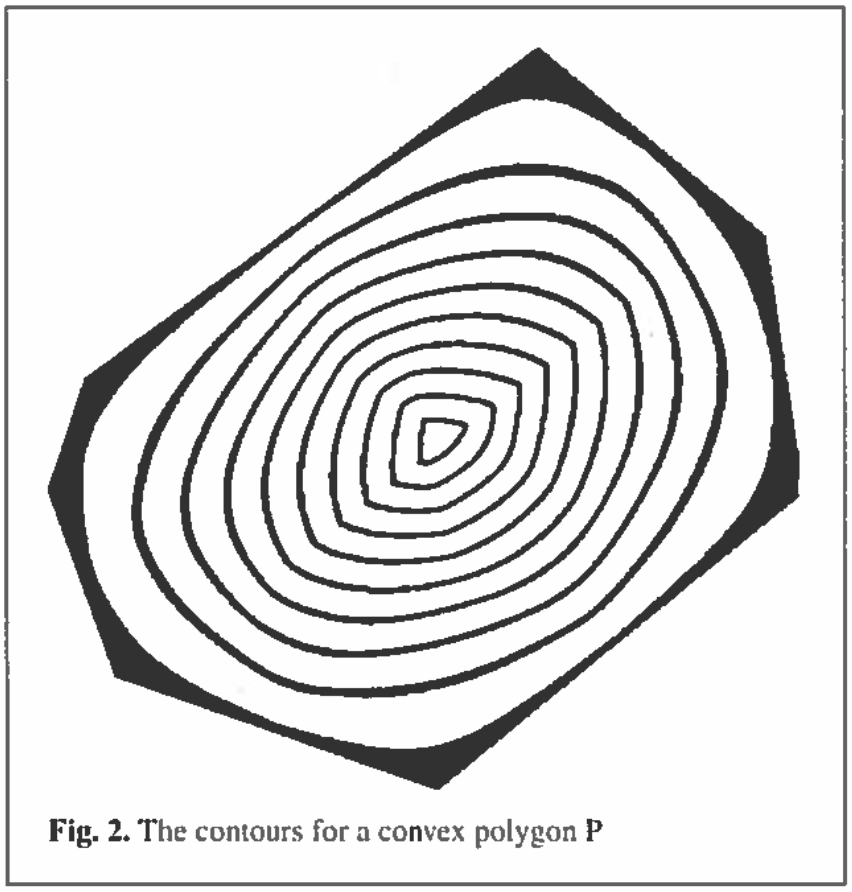