There is a long-unsolved problem posed by Janos Pach, sometimes known as the enchanted forest problem, which asks if it is possible to block a point light source in the plane from reaching infinity by disjoint mirrored disks.1 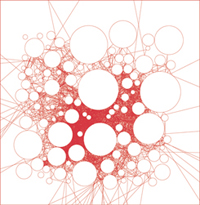 Image from the MO question, "Trapped rays bouncing between two convex bodies."
(See also "Lightray trapped between two mirror disks: Computation formulation?.") A decade later, a student (Octavia Petrovici) and I posed a seemingly easier problem, asking whether it is possible to block light with mirror segments;2 but it remains open (and Octavia and I conjectured the answer is No).

It occurred to me it might be easier to answer this question (positively):

Q. Is it possible to block light from a single point light source in the plane by a finite collection of mirrored disjoint convex bodies?

One version insists that the convex bodies be smooth, so that lightray reflection is well-defined from every point. However, one can define reasonable reflection rules from, e.g., convex polygons. Because no version is settled, there is some "problem-designer" freedom here.

The only novelty in Q is that one might imagine "engineering" the convex reflectors individually to achieve the desired goal, rather than being constrained to only use disks, or only use segments. Still, all these reflectors are dispersive, as I learned from another MO question, "Are rounded rectangle billiard dynamics ergodic?," and it is difficult for me to imagine how one could block all paths with dispersive obstacles...

80
Light reflecting off Christmas-tree balls
13
Efficient visibility blockers in Polya's orchard problem
12
Periodic lightray paths trapped between two nested mirror circles
25
Pinball on the infinite plane
14
Minimal blocking objects with shadows like a cube
19
Lightray trapped between two mirror disks: Computation formulation?
41
Can we trap light in a polygonal room?
40
Can one “hear” the shape of a polygon via external reflections?
Question feed