Pinball on the infinite plane

Imagine pinball on the infinite plane, with every lattice point $\mathbb{Z}^2$ a point pin. The ball has radius $r < \frac{1}{2}$. It starts just touching the origin pin, and shoots off at angle $\theta$ w.r.t. the horizontal. It reflects from pins in the natural manner:

Q. For a given $r$, what is the measure of the set of angles $\theta$ for which the pinball remains a finite distance from the origin forever?

Many other questions suggest themselves, but let me leave it at that basic question for now.

This problem seems superficially similar to Polya's Orchard problem (e.g., explored in the MO question, "Efficient visibility blocker s in Polya’s orchard problem"), but the reflections produce complex interactions. It is also similar to Pach's enchanted forest problem, mentioned in the MO question, "Trapped rays bouncing between two convex bodies", but it seems simpler than that unsolved problem, due to the lattice regularity. Has it been considered before, in some guise? If so, pointers would be appreciated. Thanks!

Addendum. My question can be rephrased in terms of the "Sinai billiard," as Anthony Quas explains: I am asking for the fate of radial rays in the situation illustrated: 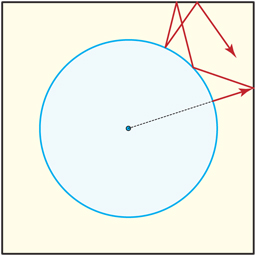 The problem is essentially the Sinai billiard. That takes place on a finite square table with a circular hole removed (=peg added). There are standard bounces off the straight edges as well as off the peg.

Repeating this, you obtain exactly the model in the question. Sinai gave a statistical analysis of the properties of the trajectory which must imply that the set of angles for which the trajectory remains bounded has measure 0.

This is an infinite horizon Lorentz gas. Ergodicity in the extended space has been shown for this model, but comparatively recently: D. Szasz and T. Varju, J. Stat. Phys. 129 59-80 (2007). But as noted already the set of initial conditions has zero measure, so this is not sufficient in itself. The initial conditions are a smooth one dimensional set in the full two dimensional collision space, so one would expect that if the set of orbits in the collision space with a bound $r$ has dimension $d(r)>1$, the desired set will have dimension $d(r)-1$, approaching unity as $r\to\infty$.

This is a reckless guess, but I wonder if the set of angles might be countable (so consider this a request for a discussion of why that might not be so if you wish.) Let the code of a trajectory be the sequence of posts hit. My wild intuition is that

Side question: Is it any different if we say that the ball is a point and the posts have radius $r?$ I'll assume not and speculate on: "could it be that with radius $r=0.48$ (say) the ball would end up arbitrarily far from the start (except for a set of starting angles of measure 0)?" Think of the squares between the posts as rooms. The ball would generally bounce around in any give room for a long time but I am thinking that it would follow a 2 dimensional drunkards walk with a small but positive transition probability.

defined as follows. Shoot a ball touching the pin at the origin in the direction $\theta$. Denote by $P_r(\theta)\in\mathbb{Z}^2$ the location of the first pin touched by the ball. After it touches $P_r(\theta)$, the ball will continue traveling along a ray of angle $T_r(\theta)$.

Clearly $\theta\in \Theta_r \Rightarrow T_r(\theta)\in \Theta_r$. The map $T_r$ is bijective and the set $\Theta_r$ is $T$-invariant. I am inclined to believe that $T_r$ is ergodic with respect to a measure absolutely continuous with respect to the arclength measure on $S^1$. If this is the case then the zero-one phenomenon above holds. (Do not ask me why I have this ergodic belief.)

The threshold statement seems harder to "argue", but observe that if $r=0$ then no irrational angle belongs to $\Theta_r$

Oops! $T_r$ is indeed not injective and in fact it is the wrong map. Here is the correct map. First fatten the pins to disk of radii $r$, and reduce the ball to a point particle. Consider the cylinder $C=S^1\times [-\pi/2,\pi/2]$, where $S^1$ is the boundary of a fat pin. A particle leaves the boundary of this fat pin with a velocity making an angle $\phi\in [-\pi/2,\pi/2]$ with the outer normal to the boundary at the departure point.

Then $T_r: C\to C$. This is almost injective (problems do appear when the particle grazes the boundary of a pin.) However is measure preserving for a Liouville-type measure. associated to the geodesic flow on the plane with the fat pins removed. The ergodicity is not obvious, but the dynamics of maps such as $T_r$ are being investigated by ergodic theorists. (I'm not one.)

Not the answer you're looking for? Browse other questions tagged reference-request mg.metric-geometry ds.dynamical-systems plane-geometry billiards or ask your own question.