Can we trap light in a polygonal room?

Suppose we have a polygonal path $P$ on the plane resulting from removal of an one of a convex polygon's edges and a ray of light "coming from infinity" (that is, if we were to trace the path backwards in time, we would end up with an infinite ray) and reflecting from the sides of $P$ according to standard law of reflection (see below for discussion of interaction with vertices). Is it possible that $P$ will stay inside $P$ forever?

More generally, we could ask this for more general polygonal paths and instead of talking about "inside of $P$" we might talk about for example its convex hull. I know that it is possible with more general curves, even with "infinitely-sided" polygons, which can be shown with idea of this answer (illustrated here). The linked question was also a partial motivation to this one.

About corners: the easiest (and preferable for me) way to deal with them is to require that the light should never hit it (the light then disappears or whatever, I leave it up to your interpretation). Another idea I had is to make the light reflect so that it makes equal angles with bisector of the internal angle at the vertex. However, if it helps to construct an example, feel free to suggest another rule.

At first I thought that an example most likely exists, but I couldn't find one (I had to work with pen and paper though, I don't have software with such functionality). I know that the path cannot be eventually periodic, because the process of light traveling is reversible. I see no obvious obstruction which would disallow more complicated infinite paths.

Thanks in advance for all the feedback.

Edit: in the view of Joseph's example, I would like to clarify that I want the endpoints of the polygonal path to also be contained in it and the light is supposed to vanish on them.

Edit2: I don't know how much easier the problem will become, but seeing the paper Joseph refered to in his first answer I thought that the following weakening might have ability to trap a ray of light: instead of polygonal chain, let's just consider a set of closed line segments. The line segments are allowed to intersect, and the light is supposed to never hit an endpoint of an line segment or an intersection point of two segmentss. Let's see if anyone can figure out such a trap...

Edit3: I forgot to add this to the description of the bounty, I plan to award either (these are the weakest possibilities in both directions):

If neither of the above is achieved by anyone, I am willing to award the bounty to any noteworthy attempt in proving either.

Update. I answered too quickly. The construction I describe traps a ray whose source is inside.

Abstract. We construct a configuration of disjoint segment mirrors in the plane that traps a single light ray aperiodically, providing a negative solution to a conjecture of O’Rourke and Petrovici. We expand this to show that any finite number of rays from a source can be trapped aperiodically.

To obtain a polygon, one would have to connect their disjoint segments into a path, but I think this would not be difficult. Update. Apologies. Now that I found their construction, which mimics an irrational sloped billiard path reflecting inside a square, it is not immediately evident how to inject the ray from outside the construction...

Incidentally, it is not possible to trap light rays from a continuum of directions, even with curved mirrors:

I post this in response to Wojowu's request in a comment; I don't really consider this usefully addressing the question raised.

I thought of a simpler construction. Take a square with mirrored sides, and poke a point-hole in the interior of the top edge. When a ray from outside with an irrational slope (w.r.t. the box sides) enters through the hole, it is trapped. For if it escaped through the hole after $k$ reflections, then it would contradict the irrationality of the slope. It is known that the path of this "billiard" is aperiodic (a result due to G.A.Galperin, I believe). 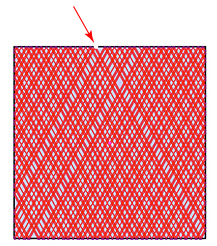 And of course almost all rays have irrational slope.

But as soon as the point-hole is enlarged to a positive-width hole, the ray eventually escapes (Poincaré recurrence).