Commutativity in the Fundamental Group and Knot Theory

I believe that there are conclusions (what conclusions?) for satellite knots. Any comment or reference will be greatly appreciated.

Since every homotopy class of loops is represented by infinitely many knots, the only way I can interpret the question is:

Is there a characterization of commuting pairs of elements $\alpha, \beta$ of $\pi_1(M)$ in terms of existence of some "nice" knots representing these based homotopy classes?

(I am dropping the disjointness condition since it does not make much sense to me.)

Then the answer is: If and only if $\alpha, \beta$ are represented by powers of torus knots in $M$ lying on the same torus which is either embedded in $M$ or is a "vertical" torus immersed in one of the Seifert components of the JSJ decomposition of $M$.

The proof is quite easy and follows from the JSJ theory, once you know what it is. The point is that either the group generated by $\alpha, \beta$ is cyclic (possibly finite) in which case both loops could be simultaneously (based) homotoped to an embedded solid torus in $M$ or it is free abelian of rank 2, in which case you apply the JSJ theory.

I believe Misha's comment directly addresses some of the problems with you question as stated. However, let me say a few words about the issues here and then mention some observations that might help you refine your ideas of your question.

Ignoring the issues of base points (which are also important) and instead concerning ourselves with only free homotopy classes of curves still leaves some issues. In the picture below, consider the green curve as $a$. The homotopy class of $a$, $\alpha$ is trivial, and so it commutes with everything in $\pi_1(M)$. 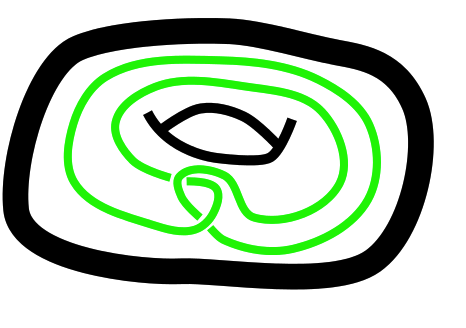 Not the answer you're looking for? Browse other questions tagged reference-request gt.geometric-topology knot-theory 3-manifolds virtual-knots or ask your own question.

23
Utility of virtual knot theory?
4
First appearance of Novikov's additivity theorem
2
On complex surfaces with Kodaira dimension 1
2
Plat representations of unlinks
23
Representing elements of $\pi_2(M)$ by embedded spheres in 3-manifolds
4
How disconnected can a Seifert surface be?
3
Cusps in hyperbolic manifolds and fundamental group
4
Simple invariants to detect concordance in general 3-manifolds
5
Is there a generalized Property P - what can we say about framed link descriptions of $S^3$?
1
References about transfinite socle series
Question feed