A catenary curve is the shape taken by an idealized hanging chain or rope under the influence of gravity. It has the equation $y= a \cosh (x/a)$. My question is:

What is the shape taken by an idealized, thin two-dimensional sheet, pinned on a plane parallel to the ground, under the influence of gravity?

The answer surely depends on how it is pinned to the plane, the boundary conditions. Natural options are:

The middle option above would look something like this when inverted: 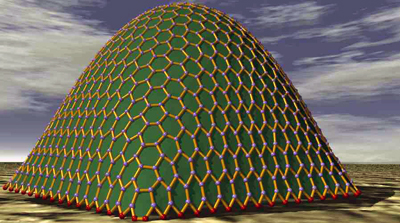 (Image by Tim Tyler at hexdome.com.)

I don't think any of these shapes is a catenoid, which is the surface of revolution formed by a catenary curve. Is there a simple analytic description of any of these surfaces, analogous to the $\cosh$ equation for the catenary curve? I have been unsuccessful in finding anything but simulations of solutions of the differential equations.

This question arose in imagining a higher-dimensional version of the property that an inverted catenary supports smooth rides of a square-wheeled bicycle (explored in this MO question). Thanks for pointers!

A model equation for an inextensible, ﬂexible, heavy surface in a gravitational ﬁeld was deduced by Poisson Lagrange and later the problem was also studied by Poisson (see the references in the linked papers below). The equilibrium condition for a hanging heavy surface of constant mass density reads $$\sqrt{1+|\nabla u|^2}\ \nabla\cdot{}\frac{\nabla u}{\sqrt{1+|\nabla u|^2}}=\frac{1}{u+\lambda},\qquad x\in\Omega\subset\mathbb R^2,\qquad\qquad(1)$$ where $u=u(x)$ is the vertical displacement and $\lambda\in\mathbb R$ is an arbitrary constant (a Lagrange multiplier). (1) is the Euler equation of the variational integral $$I(u)=\int_{\Omega}u\sqrt{1+|\nabla u|^2}dx,$$ which can be interpreted as the vertical coordinate of the center of gravity of the surface $$\mbox{graph}(u)=\{(x,u(x)):\ x\in\Omega\}\subset\mathbb R^2\times\mathbb R.$$

It is known that problem (1)-(3) has no classical solutions for the values of area $A$ outside of some bounded interval $[A_{\min},A_{\max}]$. Moreover, the corresponding variational problem has no global solutions for all $A\in\mathbb R$. A short survey of some old and relatively new results concerning well-posedness of (1)-(3) and its multidimensional analogues can be found in the paper by Dierkes and Huisken, "The N-dimensional analogue of the catenary: Prescribed area", in J. Jost (ed) Calculus of Variations and Geometric Analysis, Int. Press (1996), pp. 1-13.

The thing that comes to mind is the capillary surface including gravity. See the note by Finn, available free as a pdf, as a reference at the end of:

Hmmm, maybe not. Your surface would not have a large flat region in the middle...

A rotated catenary surface is quite simply not isometric to a flat disc. So we might, for instance, be asking about a rubber sheet, glued down along a boundary, and allowed to sag in the middle under gravity. The elastic energy less resembles the mean curvature operator in favor of the ordinary Laplacian

It appears you are looking for the biharmonic equation, as the force of gravity vector field will be considered constant and divergence free, so the displacement $u$ satisfies $\Delta^2 u = 0.$ See

Not the answer you're looking for? Browse other questions tagged calculus-of-variations classical-mechanics geometric-analysis recreational-mathematics reference-request or ask your own question.