These distributions depend on $a, b, c$. The empirical distributions can be obtained by computing the statistics in question over a large number of observed sets $S$ with the same $a,b,c$, generated with the above mechanism. Because the elements in $T$ are NOT independently distributed, neither the Central Limit Theorem nor the law of the iterated algorithm apply to $W_S$ or $M_S$. I started to investigate this problem in my answer to this question, where I use the Borel-Cantelli lemma. One fact that seems clear is this (see here):

where $R_S(z)$ is the number of non-negative integer solutions to $x+y\leq z$ with $x,y \in S$. From this, by derivation with respect to $z$, you can get a similar formula for $E[R'_S(z)]$, also featured in the same post:

Another problem of interest is this: is any realization of $S$ almost surely equidistributed in residue classes? What about $T$? More on this here and here. 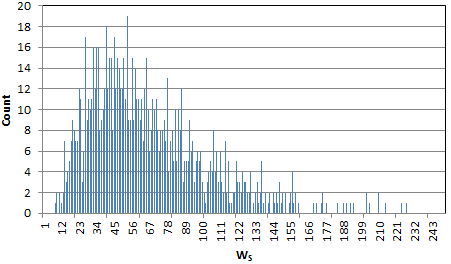 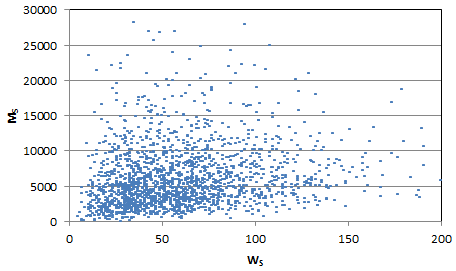 I have also tested other examples, see here:

Keep in mind that pseudo-primes are not primes, they are just numbers that look random (generated with the mechanism described here) but having a distribution similar to primes, except that primes are by no mean the realization of a random set: sums of two primes are very rarely an odd integer, making them totally unfit as an example of a random set. And that's just one issue of non-randomness with primes, there are many others. So my post here is of no help to prove Golbach conjecture, and that was not the goal to begin with.

A pretty good approximation for $E[W_S]$, depending on $a,b,c$, is given by

See my answer to this question for details, as well as here. In this case, the integral is finite and yields $E[W_S]\approx 63.76$ while the exact value looks very close to $65$. The variance of $W_S$ is also expected to be finite, and this is the reason why the Central Limit Theorem does not apply here.

It follows (see here and here) that

This analysis is further legitimating the fact that the strong Goldbach's conjecture (among many others in additive combinatorics) is true with probability one. Strong GC would be proved (with probability one, so not really a real proof) if prime numbers were random enough, random enough as the numbers featured in this discussion. Unfortunately, they are not: for instance, the sum of two odd primes is never an odd integer. GC corresponds to $a=1, b=1, c=1$, which fits with the theory presented here. But the gap to prove GC, based on this analysis, may be not that far away to fill. The first step is to look at results deeper than the central limit theorem, like the law of the iterated logarithm, and shows it applies to GC. It also involves proving that primes are "random enough".

Not the answer you're looking for? Browse other questions tagged nt.number-theory pr.probability probability-distributions additive-combinatorics limits-and-convergence or ask your own question.