Goldbach conjecture and other problems in additive combinatorics

The field is also known as additive number theory. I am interested in sums $z=x + y$ where $x \in S, y\in T$, and both $S, T$ are infinite sets of positive integers. For instance:

A possible approach to check if $S+T = \{x+y, x\in S, y \in T\}$ covers all sufficiently large integers is as follows.

One issue is with the integral, which is only the first term in an Euler - Maclaurin series expansion to approximate $r(z)$. You need to use more than just the first term. If $S=T$ are the sets of squares, rather precise formulas are available for $r(z)$: see the Gauss-circle problem, here (Wikipedia) and here (MSE).

Another question is whether my method is equivalent to the circle method.

The sequence of $z$'s with $r(z)=1$ is listed at the bottom of my previous question, see here. I searched for this sequence to see if it had been discovered, but could not find any reference.

If my approach (assuming it is new!) ever leads to a proof of some famous conjectures, the proof will be very technical, difficult and long. It is beyond my reach but some mathematicians with experience dealing with extremely precise (second- or third-order approximations) to the asymptotics involved might have an answer about the feasibility of my approach. Just to give an idea of the many problems, it may require excellent asymptotics about a function more complex than the Lambert function (again, this briefly outlined in my previous question).

Maybe the following is true for sums of two primes and sums of a prime and and a square: there only finitely many $z$'s that can be expressed as $z=x+y$ in less than $k$ different ways, with $x\in S, y \in T$, regardless of $k$. This would imply that all but a finite number of $z$'s can be expressed as the sum in question.

It seems what you are asking is "If we have a precise asymptotic for the number of elements of a set, can we solve binary additive problems involving that set?"

The answer in general seems to be `no'. Let's consider Goldbach's conjecture that every large integer $n$ is the sum of two primes. It is not hard to see from pigeonholing that the typical $n$ will have at most $O( n / \log^2 n)$ solutions to $n=p+q$ within the primes. In fact, classical sieve theory easily establishes a uniform upper bound of this form unconditionally.

Now pick a rapidly increasing sequences of numbers $n'$ and remove from the set of primes those primes arising in solutions to $n'=p+q$ for that given $n'$. For each $n'$ we have removed at most $O(n' / \log^2 n')$ elements from the full set of primes, and so the asymptotic of the counting function of our set has not changed, however the assertion that every large integer is the sum of two elements from our modified set is now false.

You might object that my modified set of primes will not satisfy the more precise asymptotics (with error terms) that hold for the primes, such as the consequences of the (Generalized) Riemann Hypothesis or the Elliott-Halberstam conjectures. And this is true. However, there has been a lot of effort put into trying to deduce solutions to additive problems conditional on these conjectures, and even assuming these conjectures there is no known proof of either of the two famous additive problems (Goldbach and twin primes). Indeed there is an obstruction related to the "parity problem" in sieve theory which also enters the picture.

This does give rise to the following interesting question, which I do not know the answer to:

Does there exist a set of integers that satisfies the asymptotic behavior of the primes in arithmetic progressions (with the error term implied by GRH), but which fails to satisfy weak Goldbach?

Generalization of the formula

In particular, it applies to sums of a square and a prime, see here. A generalization to sums of $k$ sets is discussed in my new MO question, here.

Here is a possible path to prove Golbach's and other conjectures in additive number theory, such as the deeper Hardy and Littlewood's $H$ conjecture (All but 21 non-square integers are the sum of a square and a prime). The idea is to try to prove a far deeper, more generic, and stronger result which is just a pure analytical result, not even connected anymore to number theory, in the same way that the roots of Riemann's function is a purely analytical problem that can solve many number theory problems.

It goes as follows. Note that Golbach can be rewritten as follows: each sufficiently large positive integer $z$ can be written as $z=(p-1)/2 + (q-1)/2$ where $p,q$ are odd primes.

Step #2: now $S$ is "well balanced" (this concept still needs to be defined, this is the most difficult part of the problem), and any well-balanced set $S$ with $r'(z) \rightarrow \infty$ (this is the case here) satisfies the following conjecture ($w$ is an integer): 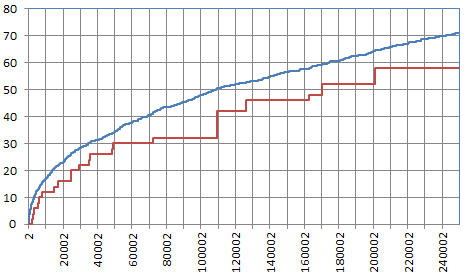 Below is the source code to produce these charts. They come from the last part of the code, producing the text file Prob4.txt. It is written in Perl.

In a paper by Andrew Granville, published in Project Euclid (see here) one can read the following:

This is very similar to what I discuss here. While Andrew comes up with $N_S(x) \propto \sqrt{x \log x}$, a stronger result than my $N_S(x) \propto x^{2/3} $ since he needs even fewer primes than me, it is using the same idea that you only need to work with a tiny subset of all primes to prove Goldbach. His argument is probabilistic thus not a proof, mine is non-probabilistic but I don't end up with a proof either. Note that my $x^{2/3}$ can be reduced to $x^\mu$ for any $\mu> \frac{1}{2}$, based on the results featured in my previous answer: that way, we continue to have $r'(z)\rightarrow\infty$ as $z\rightarrow \infty$, which is what we need. If you use $\mu = \frac{1}{2}$, it won't work: $r'(z)=\frac{\pi}{4}$ is a constant, and the primes left are just as rare as square integers. We all know sums of two squares do not cover all integers, but only a very small set of integers, of density zero.

If Andrew Granville had used the more profound law of the iterated logarithm (rather than the central limit theorem), he would probably have ended up with a formal proof of the following result: the density of even integers $z$ that can not be written as $z=x+y$ with $x, y$ belonging to his very small subset of primes, is zero. I believe this statement may have been formally proved already, if you consider the set of all primes, rather than a tiny subset of primes.

Note: Maybe an example of a well-balanced set $S$ is one where the gaps between successive elements is a monotonic (increasing) function. I guess we can make that happen for the tiny subsets of primes needed to prove Goldback, with $\mu=\frac{2}{3}$. However, well-balanced also requires some congruence features. For instance, if all elements of $S$ are odd, then $S$ can not be well-balanced.

3
An estimate for 'almost primes'?
24
Are sets with similar asymptotic behavior as the primes necessarily finite additive bases?
0
Upper bound for the number of even numbers sum of a prime and a semi-prime not fulfilling Goldbach's conjecture
0
Paradox in additive combinatorics
1
Curious inversion formula in additive combinatorics
0
Congruential equidistribution, prime numbers, and Goldbach conjecture
3
Prime gap distribution in residue classes and Goldbach-type conjectures
3
Goldbach conjecture and the representation number
5
Weak Goldbach conjecture with distinct primes for odd integers between $4\times 10^{18}$ and $10^{27}$
Question feed