Cut locus on a hypercube

Inspired by the question, "Shortest path connecting two opposite points on a cube":

Q. What does the cut locus with respect to one corner of a hypercube in $\mathbb{R}^d$ look like?

"The cut locus from a point $p$ on a surface is the closure of the set of all points that have at least two shortest paths connecting them to $p$."1 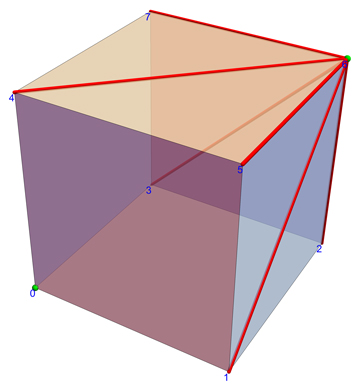 Cut locus with respect to vertex $0$ is a star-tree rooted at vertex $6$.

38
Shortest path connecting two opposite points on a cube