Optimal inspection path on a sphere

Suppose you would like to "inspect" every point of a unit-radius sphere $S \subset \mathbb{R}^3$ by walking along a path $\gamma$ on $S$, but you can only see a distance $d$ from where you stand.

Two other ways to define $\gamma(d)$: 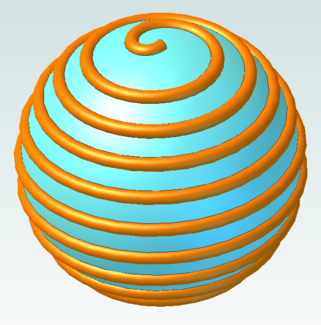 (Image from grabcad.com.)
What is quite unclear to me is when $d$ is less than but close to $\pi/2$. For example, suppose $d = \frac{5}{12}\pi = 75^\circ$. The union of disks of this radius centered on the equatorial semicircle that works for $\pi/2$ is shown in (a) below: a strip connecting the north and south poles is uncovered (blue circles are boundaries of disks of radius $d$ centered on $\gamma$):

One can construct a candidate $\gamma$ as in (b) above: extend the semicircle at each end so that all points on the equator are reached, and add short vertical sections, red to reach the north pole, and green to reach the south pole. It does not seem likely that such sharp turns yield the shortest $\gamma$.

Perhaps this question can be answered even without precise understanding of $\gamma(d)$ for all $d$:

I originally wanted to explore this for any (smooth, closed, compact) surface in $\mathbb{R}^3$, but it already seems not so straightforward for the sphere.

Q3. Has this question been studied before? It feels classical.

The question could also be posed for $(d{-}1)$-dimensional spheres in $\mathbb{R}^d$, again seeking an optimal inspection path for each $d$. (My interest in $\mathbb{R}^3$ stems from two related concepts: Voronoi diagrams on a surface, and the cut locus with respect to a path, although neither seems to help here.) Thanks for any pointers or ideas!

There is a solution for a series of $d \in (0,\pi]$ for which solutions without overlap exist. See What is the best way to peel fruit?. 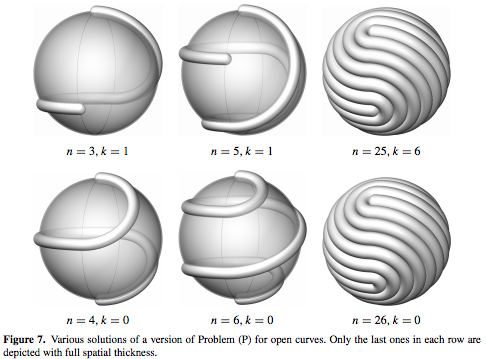 Not the answer you're looking for? Browse other questions tagged reference-request mg.metric-geometry oc.optimization-and-control or ask your own question.

30
What is the best way to peel fruit?
4
Finding the shortest curve that is at distance $\epsilon$ of every point of a surface
6
Shortest path to inspect a polyhedron
3
Optimizing finite-length approximations to space-filling loops