Relationship between the focal locus and the cut locus

I am seeking clarification of the relationship between the focal locus and the cut locus of a curve $C$ in $\mathbb{R}^2$, and of a surface $S$ in $\mathbb{R}^3$. Essentially my question is,

For example, it believe the two coincide for a sphere (in any dimension): both are simply the center point of the sphere. It may be that these issues are primarily definitional rather than substantive. Let me offer the definitions with which I am working.

Cut Locus. Generally the cut locus is defined on a Riemannian manifold with respect to a point. But instead I want to define the cut locus of a set in $\mathbb{R}^n$. Let me follow the definition of Franz-Erich Wolter, who wrote his Ph.D. thesis on the topic:

"The cut locus $C_A$ of a closed set $A$ in the Euclidean space $E$ is defined as the closure of the set containing all points $p$ which have at least two shortest paths to $A$."

(This is quoted from reference (1) below.) This definition is in accord with that of the medial axis, extensively explored in computer science.

Focal locus. I am having more difficulty locating a widely accepted definition of the focal locus. Let me follow Thorpe:

(These quotes are from reference (2) below.)

One aspect of the focal locus that confuses me is that there is a notion of focal surfaces, which derive from "the reciprocal of the principal curvatures," as described in (3). Here there are two surfaces, as opposed to one focal locus, as depicted in this intriguing figure: 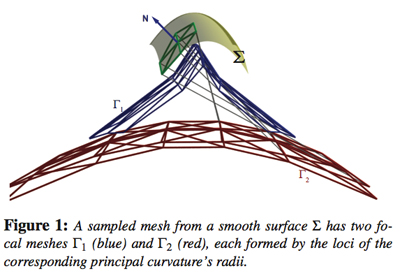 It may be that there are references that would resolve my definitional confusions, in which case pointers would be much appreciated. Thanks!

I believe that the focal locus is the same thing as the conjugate locus in Riemannian geometry. Given a codimension 1 submanifold $S \subset \mathbb{R}^n$, the exponential map $S \times \mathbb{R} \rightarrow \mathbb{R}^n$ is given by $(x, t) \mapsto x + t\gamma(x)$, where $\gamma$ is the Gauss map. The cut locus is the closure of all points in $\mathbb{R}^n$ that have more than one pre-image. The focal points is the closure of all points where the map is not a diffeomorphism.

Given any point where the curvature $\kappa$ is nonzero on a smooth curve in the plane, there is a corresponding point on the focal locus at distance $1/|\kappa|$ on the side of the curve that is inwardly curved.

I believe that the focal locus is always contained in the cut locus.

I will restrict my remarks to your first question, except that I will talk about controlling cut/focal points instead of intuitively understanding them, but I hope some intuition comes from the remarks. Maybe you already know the standard facts that will follow.

I think that cut points are much more mysterious and harder to understand than focal points. In the presence of curvature bounds, focal points can be controlled pretty well due to comparison geometry. Let us talk about focal points to embedded submanifolds. For the comparison space, you take a manifold of constant curvature K, and then construct an embedded submanifold by requiring that all eigenvalues of the second fundamental form be (the same) constant $\lambda$. You can write down the distance to the focal locus of the submanifold explicitly in this case in terms of $K$ and $\lambda$. Now given an arbitrary riemannian manifold with curvature bounded above by $K$ and second fundamental form below by $\lambda$, you can favorably compare the distance to the focal locus to that of the comparison space, see Warner, F. "Extension of the Rauch Comparison Theorem to Submanifolds" http://www.jstor.org/pss/1994552

In general there is no lower bound for the cut locus distance of a submanifold even if there are curvature bounds. But there are results if the submanifold is convex in some sense. For instance, consider a manifold with boundary $(M, \partial M)$ with mean curvature $H > 0$ and suppose that |Ric$(M)| \leq K$. Then we can use a second variation argument (that only applies if we haven't yet reached the focal locus) to put a lower bound on the cut locus distance in terms of the dimension of the manifold, $K$, and $H$. This lower bound goes to infinity as $K \to 0$, so if your curvature bound is small enough you can try to say things like the first cut point cannot occur before the first focal point.

EDIT: I see my comments may be too general, given that your question was specifically focused on curves and surfaces. For a surface $S \subset \mathbf R^3$, the ambient manifold has curvature zero so there is a nice relationship between the curvature of $S$ and the second fundamental form. My general feeling is that the cut points should be related to issues of convexity, while focal points are more related to "how much $S$ is curved."

I've been trying to work myself through this very problem of late. A text you might find useful is Geometric Differentiation by Ian Porteous. Therein the author through his own idiosyncratic yet quite utile methodology discusses the various level of contact that spheres can have with a given surface and hence involving the so called ridge points.

As alluded to in previous posters, I think that one of the key differences between the two loci is that of local vs global phenomena on a surface. Focal loci are local in nature, whereas cut loci are global.

Edit: This paper -- J.J. Hebda, Cut Loci of Submanifolds in Space Forms and in the Geometries of Moebius and Lie, Geometriae Dedicata, 55, 75-93, 1995 -- gives the following characterization of cut loci of submanifolds (which he takes to mean the entire set of focal points of the given submanifold and the points with two or more closest points on the submanifold): The set of cut points of a properly embedded submanifold of a complete, connected space form (i.e., Euclidean space, hyperbolic space or the sphere) is the set of centers of maximal supporting balls of that submanifold in the larger space, where a supporting ball is an open ball in the space-form that does not intersect the submanifold but whose boundary sphere does.

Not the answer you're looking for? Browse other questions tagged reference-request dg.differential-geometry mg.metric-geometry or ask your own question.