What is the analog of the "Fundamental Theorem of Space Curves," for surfaces, and beyond?

The "Fundamental Theorem of Space Curves" (Wikipedia link; MathWorld link) states that there is a unique (up to congruence) curve in space that simultaneously realizes given continuous curvature $\kappa(s)$ and torsion $\tau(s)$ functions. 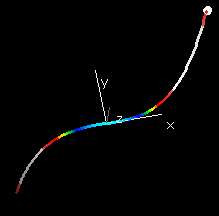 (Image from this link.)

I've added a few sentences to my answer to clarify something that some readers may be wondering about, which is why there isn't as simple an answer for surfaces in $3$-space as there is for curves in $3$-space.

First, a word of caution about the so-called 'Fundamental Theorem of Space Curves': You need to assume that the curvature $\kappa(s)$ is nowhere vanishing in order to get $\tau$ well-defined. The theorem is really about space curves endowed with a Frenet frame, and a Frenet frame for a given smooth curve may not be unique (or even be continuous) if $\kappa$ is allowed to vanish.

Second (still about curves), if one looks carefully at the FTSC, one sees that one actually has to specify three pieces of data along an interval $I\subset \mathbb{R}$ in order to determine a curve $c:I\to\mathbb{R}^3$ up to rigid motion: The functions $\kappa>0$, $\tau$, and the element of arc, $\mathrm{d}s$, which is a $1$-form. When $\kappa' := \mathrm{d}\kappa/\mathrm{d}s$ is nonzero, one could, alternatively, specify the triple of functions $(\kappa,\tau,\kappa')$ along $I$, for, then, one could recover $\mathrm{d}s$ as $(\mathrm{d}\kappa)/\kappa'$. This is satisfying because one has exactly three pieces of data along the domain of the curve to specify the three components of the curve up to rigid motion.

Now, for surfaces, one could hope that it would be possible to determine an immersed surface $f:S\to\mathbb{R}^3$ (which depends on a choice of three 'arbitrary' functions on $S$) uniquely up to rigid motion by specifying some three functions that are constructed out of $f$ by differentiation operations and algebra and that are unchanged when $f$ is replaced by $Rf$, where $R$ is a rigid motion of $\mathbb{R}^3$, i.e, what are often called 'Euclidean differential invariants' in the differential geometry literature. There certainly are plenty of such 'Euclidean differential invariants; for example, the Gauss curvature $K$ and the mean curvature $H$ (or, if one is worried about orientation effects, say $H^2$) are second order invariants, and higher order invariants are easily defined (such as, for example, $|\mathrm{d}H|^2$, etc.). However, it is a (nontrivial) theorem that no such triple of differential invariants exists that will uniquely characterize each immersion up to rigid motion. (Even stronger, it turns out that there is no differential invariant 'tensor' of rank $3$ that can do this, which includes data such as the first fundamental form, etc.) It turns out that the best one can do is specify 'excess data' to get the 'unique up to rigid motion characterization' property and then analyze what conditions one needs to put on the 'excess' in order to determine when the specified data actually does come from an immersion $f$. Bonnet's Theorem (discussed below) is one such example, and probably the most well-known (because we teach it in every beginning differential geometry course).

Now, for surfaces in $\mathbb{R}^3$, there is a different (and more traditional) generalization from the result that Anton mentions that may be what you want. It is usually known as Bonnet's Theorem, and it goes like this:

Note that this uniqueness and existence theorem makes sense: A choice of $f:S\to\mathbb{R}^3$ is a choice of $3$ 'arbitrary' functions on the surface $S$ (subject only to the 'open' condition that they define an immersion of $S$ into $\mathbb{R}^3$) while a choice of a pair $(\mathrm{I},\mathrm{I\!I})$ represents a choice of $6$ 'arbitrary' functions on $S$ (the coefficients of the two quadratic forms in local coordinates, subject only to the condition that $\mathrm{I}$ be positive definite). Subjecting those $6$ functions to $3$ partial differential equations (i.e., the Gauss and Codazzi equations) restores the 'balance of arbitrariness' to $3$ arbitrary functions on the surface.

In higher dimensions, for submanifolds of $\mathbb{R}^d$, there is a similar theorem, but now $\mathrm{I\!I}$ gets replaced by a quadratic form taking values in a 'normal bundle' $N$, which is a vector bundle endowed with an Euclidean connection. The Gauss equation and the Codazzi equations generalize in a straightforward way, but when the 'normal bundle' has dimension greater than $1$, one also has a further set of equations relating the curvature of the connection on the normal bundle with the quadratic form $\mathrm{I\!I}$. The exact statement can be found in any good book on submanifold theory. If the ambient space is not $\mathbb{R}^d$ or, more generally, a space of constant sectional curvature, then the situation is more complicated, and I refer you to a book on submanifold theory for the ideas and details.

The answer is rewritten.

First you need to find the analogs of natural parametrization, curvature and torsion for surfaces; the same can be done for all submanifolds, say of dimesion $m$.

Let us denote by $S^k(\mathbb R^m)$ the space of homogenious symmetric polynomials of degree $k$ on $\mathbb R^m$.

Nondegeneracy up to $n$ plus and equality of the tensors up to $n+1$ imply congruence of submanifolds if dimension is small enough (say it is just enough to have $(n+1)$-regular submanifold). The tensors $G_i$ have to satisfy some equations (see the other answers).

You also get existence assuming dimension is big and $G_i$ are big. It follows from Gromov's analog of Nash--Kuiper theorem; it says that given embedding one can keep $G_1,\dots,G_n$ and add to $G_{n+1}$ arbitrary positive tensor; positive means sum of $\ell^{2\cdot (n+1)})$, where $\ell$ is a linear function. (Nash--Kuiper theorem states the same for $G_1$.)

The fundamental equations you look for, are known as Gauss-Codazzi equations. I'm not an expert, but the Wiki article

I think that the subject Submanifold Geometry can satisfy what you need. And you can find the generalization in the book: Geometry 1: Basic Idea and Concepts of Differential Geometry; Chapter 3, which can be found on the website http://en.bookfi.org/book/444417.

However, there are two special things we should pay attention:

First is about curve: $r:I\rightarrow\mathbb R^n$. The curve's Fundemental Theorem does only rely on curvature and its uniqueness is under the natural parameter.

Second is about hypersurface $r:M^n\rightarrow\mathbb R^{n+1}$, like surface in $\mathbb R^3$. Because it is without torsion, then we can drop Ricci Equation. So the Fundemental Theorem is only depend on The Second Fundamental Form.

35
Determining a surface in $\mathbb{R}^3$ by its Gaussian curvature
2
Generalization of Vogt's Theorem for curves in higher dimension
39
Are there some other notions of "curvature" which measure how space curves?
3
Existence and Properties of 3D Curves with unusual 2D $(\kappa(s),\tau(s))$ Trajectories
5
Torsion of submanifolds
Question feed