Are there some other notions of “curvature” which measure how space curves?

I am learning differential geometry and have a few questions on curvature. -- Background:

Thank you very much!

Also, the OP was not precise about how to interpret the vague term 'space', so it is not at all clear how to answer the question about possible measurements of how 'space curves'. From the context of the question and the given description of the OP's background, I would guess that 'space' is intended to be interpreted as 'Riemannian manifold', in which case the OP is asking some fundamental questions that often aren't explicitly addressed in introductory expositions of Riemannian geometry: First, is the 'Riemann curvature tensor' the whole story in terms of understanding the local geometry of Riemannian manifolds (i.e., in describing how such 'spaces curve')? Second, how did the notion of a 'connection' arise historically, since Riemann didn't use it to define his measure of how 'space curves', and what was the motivation for introducing it? Both these questions frequently occur to beginners in the subject, so it's a bit surprising that they aren't treated a bit more explicitly in introductory books.

For example, consider the following situation: Suppose that, instead of Riemannian geometry on smooth manifolds, we were considering Hermitian geometry on complex manifolds, i.e., our manifolds are complex and we only consider Riemannian metrics that are complex compatible, in the sense that $g(iv) = g(v)$ for all tangent vectors $v$. In this case, the Riemannian curvature tensor of $g$ is not the whole story in (complex) dimensions bigger than $1$; in addition to the Riemann curvature tensor, one must consider the exterior derivative of the canonical $2$-form $\omega_g$ associated to $g$.

It is a nontrivial theorem that, in the case of Riemannian metrics, all of the 'pointwise' differential invariants of a metric $g$' (once these are properly defined) are generated by the 'Riemann curvature tensor' and its 'covariant derivatives'. (Note that this is stronger than what Riemann stated, which is that, if the Riemann curvature tensor vanishes, then the metric is locally Euclidean. It could have been, for example, that, when the Riemann curvature tensor vanishes identically, this overdetermined system of equations forces some other 'independent' invariants to vanish as well, due to integrability conditions of the overdetermined PDE system. As Weyl and Cartan proved, though, this does not happen in the case of Riemannian geometry.) [In the Hermitian case above, it turns out that the Riemann curvature tensor and $d\omega_g$, together with their 'covariant derivatives' suffice to generate all of the 'pointwise differential invariants of a Hermitian metric $g$ on a complex manifold'. This is also a nontrivial theorem.]

Then, around 1890, Gregorio Ricci-Curbastro (for whom the Ricci tensor is named), realized that Christoffel's symbols could be used to define a notion of derivative for what we now call tensor fields in the presence of a background Riemannian metric $g$, one that would be independent of any choice of local coordinates, i.e., this derivative would be 'covariant', when one expresses both the tensor field and the metric in local coordinates. He and his former student, Tullio Levi-Civita, used this as the basis of their notion of 'absolute differential calculus'. This led to the idea of tensor fields 'parallel' (i.e., with vanishing absolute derivative) along curves and the notion of 'parallel transport', which gave a way of 'connecting' the tangent spaces along any (piecewise smooth) curve. This original notion of 'connection' (though I am not sure that Levi-Civita actually used this word as a noun) was then vastly generalized and applied to other geometries by Weyl, Schouten, and Cartan.

The general idea of curvature (and, indeed, holonomy) as a measure of how parallel transport depends on the choice of curve joining two points then became a fundamental notion and, in fact, it turns out that the Riemann curvature tensor of a metric $g$ is precisely the curvature (in this sense of dependence of parallel transport on the path) of the 'connection' introduced by Levi-Civita. [From this point of view, Weyl's theorem that the Riemann curvature tensor and its covariant derivatives give all of the 'pointwise differential invariants' of $g$ is by no means obvious, and it takes some serious work (with the appropriate definitions) to prove it.]

From outside the differential geometry literature, there has been a notion of cone-curvature used in shape recognition of surfaces in $\mathbb{R}^3$, e.g.:

The rough idea is to fit a cone at each point and use the cone's angle as an indicator of curvature. Below the points of high cone-curvature are more red: 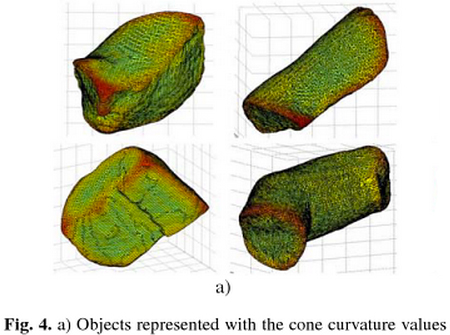 Gromov introduced several different measurements of curvature. One of them, now known as "Gromov hyperbolicity", is an asymptotic measurement that applies to path metric spaces, in particular to finitely generated groups via their Cayley graph; this property generalizes the properties of large triangles in the hyperbolic plane. Another one, actually one for each real number $K$ and known as $CAT(K)$, is a local measurement that generalizes properties of simply connected complete Riemannian manifolds whose sectional curvature is bounded above by $K$; as in ordinary Riemannian geometry, the cases $K<0$, $K=0$, $K>0$ have interesting theoretical differences.

Close to Ryan's comment and Joseph's answer, another curvature measurement introduced by Januskiewicz and Swiatkowski, and known simply as "simplicial nonpositive curvature" (the title of their paper), is a purely combinatorial condition that applies to simplicial complexes.

An interesting "curvature" which has recently received much interest is the "Ma--Trudinger--Wang" (MTW) tensor, which arose in the study of when optimal transport maps are smooth on a Riemannian manifold. It can be thought of as a generalization of sectional curvature which depends in a nonlocal (!) way on the metric/distance function.

An interesting application of the MTW tensor to non-optimal transport questions in geometry is found in http://math.unice.fr/~rifford/Papiers_en_ligne/FRV-Sn.pdf, where its relationship to convexity of the cut locus and related topics are studied.

The Gaussian curvature has a natural generalization to higher codimensional submanifolds of Euclidean space that for some reason has not appeared much (if at all) in the literature. One defines it as follows: Let $M \subset \mathbb{R}^k$ be an $m$-dimensional manifold, with $n=k-m$ the codimension. Take a point $p \in M$. For each unit vector $\nu \in \mathbb{R}^k$ normal to $M$ at $p$, we have a quadratic form $\text{II}_M^\nu(\cdot, \cdot) = < \text{II}_M(\cdot, \cdot), \nu >$. Define $K_M^\nu=\text{det}( \text{II}_M^{\nu} )/ \text{det}(\text{I}_M )$, where both determinants should be computed with respect to the same basis of $T_pM$. Let $NS_p \subset S^{k-1}$ denote the $(n-1)$-dimensional sphere of unit vectors normal to $M$ at $p$. If $\omega_d$ is the volume of the $d$-dimensional sphere, define the generalized Gaussian curvature of $M$ at $p$ to be \begin{equation} K_M = \frac{1}{\omega_{n-1} } \int_{NS_p} K_M^\nu \, dV_{NS_p}. \end{equation} You can check that for even-dimensional hypersurfaces this definition agrees with the classical definition. Other than the geometric interpretation of $K_M$ as an average of "directional Gaussian curvatures", the following two theorems justify the name give to $K_M$:

Following up on Ryan Budney's comment, here is Forman's definition of the combinatorial Ricci curvature of an edge (where {vertex, edge, face} = {0-cell, 1-cell, 2-cell}): 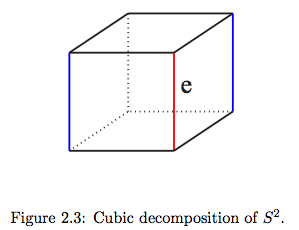 I want to answer your first question. The concept of symmetric curvature tensor is defined by N.Boroojerdian and A. Heidari. This concept is related to the notions divergence, Laplacian and Ricci Tensor. This curvature tensor is responsible for many behaviours of a geomteric space. see: "SYMMETRIC CURVATURE TENSOR,Bulletin of the Iranian Mathematical Society Vol. 37 No. 3 (2011), pp 249-267".

Assume that $M$ is a Riemannian manifold which is equipped with symplectic structure $\omega$.

I am not sure whether this quantity is equal to the scalar curvature when $M$ is a Kahlar manifold.

Not the answer you're looking for? Browse other questions tagged reference-request dg.differential-geometry gt.geometric-topology ho.history-overview differential-topology or ask your own question.

14
Riemannian Geometry
14
Algebraic surfaces and their (intrinsic) geometry
44
Classical geometric interpretation of spinors
31
Determining a surface in $\mathbb{R}^3$ by its Gaussian curvature
12
History surrounding Gauss Theorema Egregium and differential geometry
10
Who was the first to discover that the curvature of an embedded surface is the product of the principal curvatures?
10
Who first proved that a vanishing Riemann tensor is sufficient for the existence of Euclidean coordinates?
10
What are the important geometric-topological consequences of 4-dimensional version of Gauss-Bonnet-Chern theorem?
Question feed