While one can imagine, that a 3D surface could exist, that realizes all pairs of principal curvatures, because the set of all pairs of principal curvatures is, losely speaking, also 2D, it is counterintuitive that also a 3D curve could exists, that realizes all pairs of curvature $\kappa(s)$ and torsion $\tau(s)$ for $s \in (-\infty,+\infty)$.
However, interpreting $(\kappa(s),\tau(s))$ as a parametric curve in the Euclidean plane, it is fairly easy to conclude, that $(\kappa(s),\tau(s))$ must be space-filling.

the task of constructing a 3D space curve from the planar $(\kappa(s),\tau(s))$ trajectory is an interesting problem itself; it seems possible to define such a reconstruction in a canonical form, namely that

Ideas for reconstruction the 3D curve:

Concerning only "the task of constructing a 3D space curve from the planar (κ(s),τ(s)) trajectory," see this MSE question: One needs to solve a system of 1st-order DiffEqs (as you realize).

John Oprea has Maple code to actually solve these equations, at this link. He writes,

The following procedure solves the nine Frenet equations together with the three equations defining the unit tangent vector of the curve ... 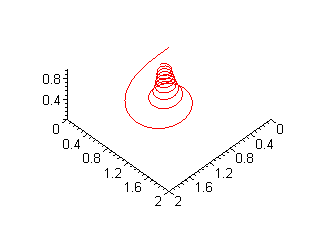 11
Surface in 3D that realizes all pairs of principal curvatures

1
Finding an explicit curve when torsion and curvature are equivalent
2
Generalization of Vogt's Theorem for curves in higher dimension
20
What is the analog of the "Fundamental Theorem of Space Curves," for surfaces, and beyond?
3
Total curvature of a Caustic
2
Planar curves in $M^{m}$ vs curves in $M^{2}$
Question feed