These two questions are two-dimensional variations on this recent MO question, "Threading pinholes in the wall of cylinder to pass through an internal coordinate." Noam Elkies suggested that even a 2D version might lead to interesting mathematics. Here I've taken the liberty to pose two specific 2D questions directly inspired by the original 3D question:

P1. Arrange $n$ points on a circle to maximize the smallest radius of a chord-confined disk.

The $n$ points determine $\binom{n}{2}$ chords, which partition the disk into cells. Among cells entirely bounded by chords (as opposed to bounded by chords and a circle arc), the question asks to maximize the size of the inscribed disks, i.e., to avoid any small disk. In the example below, the green disk is the smallest; I do not know if another $n=5$ arrangement results in a larger smallest disk. 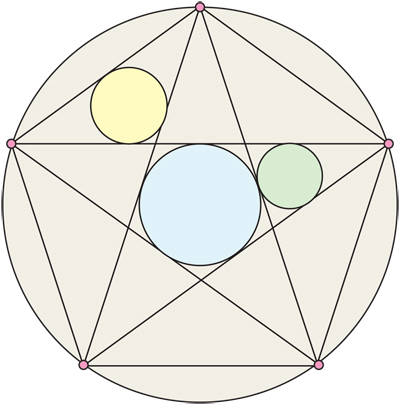 Let $r(n)$ be this max-min radius. It seems that finding the exact value of $r(n)$ for small $n$ could be interesting, as well as determining its asymptotic behavior.

P2. Arrange $n$ points on a circle to minimize the largest radius of an interior disk not crossed by any chord.

Call this min-max quantity $R(n)$. Note (updated) that, unlike in P1, here disks confined by chords and the outer circle are included. This is perhaps closer to the spirit of the 3D question, for then no point in the disk is ever far from a chord. Again I do not know if, for $n=5$, the blue disk above is the minimum of the largest confined disks over all 5-point arrangements. Update. Certainly not, as Simon shows in his answer. And here is a better arrangement for P2 with $n=5$, following Gerhard's suggestion (the three blue disks have the same radius): 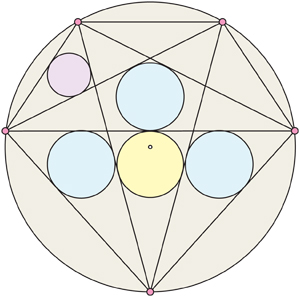 The blue disk given is not the minimum size of the largest disk. By symmetry, there are only three sized involved, and the yellow disk is strictly smaller than the blue one.

So if we pick one of the five points and perturb it a little, the blue disk will shrink while one of the yellow ones next to it will grow---however, there is a non-zero amount that you can move the point before the yellow one becomes larger than the blue one.

Not the answer you're looking for? Browse other questions tagged mg.metric-geometry discrete-geometry plane-geometry or ask your own question.

3
Threading pinholes in the wall of cylinder to pass through an internal coordinate
5
Panning for gold nuggets: a type of isoperimetric problem
0
Optimal radiating $(d{-}1)$-flats within a sphere