Three half circles on the plane may not meet nicely

Let us say that two copies of $H$ meet nicely if they intersect in exactly 6 points e.g. as the two pictures show below:

Note that the picture on the right shows two half-circles meeting nicely but whose centers do not lie inside their partner´s half disk.

Now, if we have three copies of $H$, it may not seem possible to arrange them so that they meet nicely, i.e. both of the following two conditions hold: 1. Any two meet nicely, and 2 The intersection of the three is empty.

Is this true? Or, if I am mistaken, I would appreciate that someone would show me, or describe, the desired arrangement.

EDIT: I am considering ALWAYS half-circles, i.e. copies of $H$. No need to give answers related to half-disks.

EDIT: It is possible to arrange three copies of $H$ so that both 1. and 2. hold (See the selected answer below).

1. This is the answer under the assumption that the condition 2. means exactly what it says.

Consider a regular triangle with side $2+\varepsilon$ and three diameters in the middles of its sides. If you construct the half-circles towards the triangle on these diameters, you obtain the desired example. 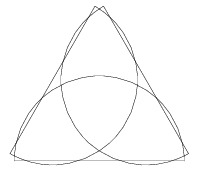 Now about the four copies.

Lemma. Assume that the two copies of $H$ meet nicely. Consider their supporting half-planes determined by the diameters. Then their intersection is an acute angle, and the centers belong to its sides. (Possibly this angle is degenerate; in this case, it should be 0 but not $\pi$, which means that the intersection should be a strip but not a half-plane.)

Proof. If the two diameters do not intersect, then each of three pairs of the form (diameter, half-circle) and (half-circle,half-circle) meet at two points. Now, consider a point $A$ of intersection of the lines supporting the diameters. At least one diameter (say, $d_1$) does not contain $A$. Hence, if the angle in the Lemma statement is not acute, then the half-circle on $d_1$ cannot intersect $d_2$. Next, the center $C_1$ clearly lies on the side of this angle. Finally, the projection of $O_2$ onto $d_1$ should lie on the segment $d_1$, hence $O_2$ is also on the side of the angle (but not on its prolongation).

Finally, assume that the diameters intersect.Then each half-circle can intersect the other diameter in at most one more point, and the total number of the intersection points is less than 6. Lemma is proved.

2. Now let us assume that you speak on the half-disks. Then the answer is positive. From the previous paragraph, we see that the three diameters lie inside the three sides of some acute triangle $XYZ$, respectively.

Now consider the three distances between the centers. If all three are less than $\sqrt3$, then by Jung's theorem they may be covered by the unit disk, and the center of this disk belongs to all three half-disks.

Otherwise, assume that $C_1C_2\geq \sqrt3$, where $C_1$ and $C_2$ be the centers on the sides $XY$ and $XZ$, respectively. We have $d(C_1,XZ)\leq 1$, otherwise the respective half-circle and segment do not intersect. But then the projection of $C_1$ onto $XZ$ is at least $\sqrt2$ away from $C_2$, hence the first half-circle cannot intersect the second diameter twice. So in this case we also get a contradiction.

I may expand any part of the above sketch.

This is off the top of my head; please take it skeptically and check all assumptions, visible and hidden.

Focus on the line segment and its end points which I call p and q for a sample H. I have convinced myself that if p and q are on opposite sides of another line segment for a different half circle H', then there are at most 4 points of intersection, so H and H' do not meet nicely.

Now consider segments of two of the semicircles that meet nicely. They each lie fully in a half plane defined by the other segment. The third segment when placed lies in some intersection of two of the half planes. But in order to meet the other two semicircles nicely, you have to place the circular arc in a way to intersect both line segments. If you are in the middle, this cannot be done.

I realize this is far from rigorous, but you may be able to firm it up and use it.

Not the answer you're looking for? Browse other questions tagged co.combinatorics at.algebraic-topology linear-algebra mg.metric-geometry discrete-geometry or ask your own question.

10
Chord arrangement that avoids confining small or large disks
16
Maximum thickness of three linked Euclidean solid tori
31
Is there a subset of the plane that meets every line in two open intervals?
5
Triangulating the plane using edges of unique rational lengths
Question feed