I would like to understand the geometric structure of a surface that Nadirashvili constructed which resolved what was known as Hadamard's Conjecture. Perhaps in the 15 years since his construction, others have redescribed the example, and perhaps even made a graphics image of it?

Background. Hilbert's theorem that implies that the hyperbolic plane cannot be realized as a surfaces in $\mathbb{R}^3$ is well known. Perhaps less well known is Hadamard's Conjecture, which asked if there is a complete negative curvature surface in a bounded region of $\mathbb{R}^3$. This is discussed at some length in Burago and Zallgaller's book Geometry III: Theory of Surfaces. The problem was solved after that 1989 book was written, as Berger explains in A Panoramic View of Riemannian Geometry (p.135):

(Incidentally, the answer to this related MO question on Compact Surfaces of Negative Curvature does not resolve my question, as it relies on Burago and Zallgaller.)

Here is the citation:

The main theorem is this:

Theorem. There exists a complete surface of negative Gaussian curvature minimally immersed in $\mathbb{R}^3$ which is a subset of the unit ball.

I have studied the paper, but my grasp of the underlying mathematics is not strong enough to convert his description into a geometric picture. If anyone knows of later discussions that might help, I would appreciate pointers or references. Thanks!

In fact the conjecture becomes true if you add embedded to the hypothesis according to a theorem of Colding and Minicozzi. (Colding, Tobias H.; Minicozzi, William P., II The Calabi-Yau conjectures for embedded surfaces. Ann. of Math. (2) 167 (2008), no. 1, 211–243.)

Who knows what Hadamard actually had in mind.

(Sorry this should have been a comment, its certainly not an answer to the question.)

The conjecture attributed to Hadamard, if one regards that as being concerned with the existence of a complete embedded negatively curved surface in a ball, is still open. I have read the corresponding papers of Hadamard, and I think that it is fairly clear that he was concerned mainly with embedded surfaces.

The book Geometry III, edited by Burago and Zalgaller, contains articles by Rozendorn where the Hadamard conjecture for embedded negatively curved surfaces is discussed. It is also proposed there what the surface should look like: a coral with a fractal structure, as shown below. 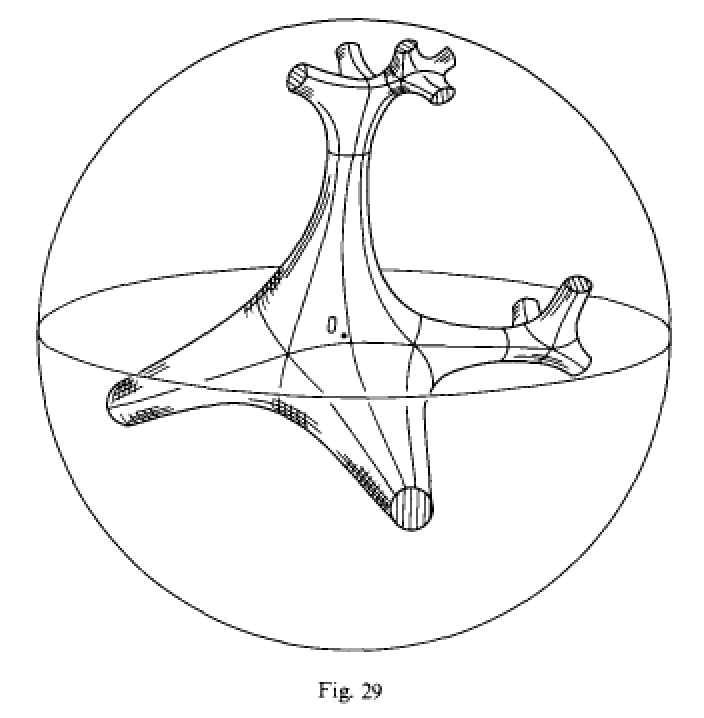 The basic idea here is that the surface (or the coral) trifurcates at a sufficiently rapid rate as it approaches the boundary of the sphere, thus each point of the surface will be infinitely far from the boundary of the ball as measured within the surface. The tricky thing here, which has not been verified, is that these pieces can be glued together without the creation of flat points. It is known that the individual constituent pieces can be negatively curved.

Not the answer you're looking for? Browse other questions tagged dg.differential-geometry reference-request riemannian-geometry or ask your own question.