Q2: when does the first triple occur? (Maybe never?) What is the critical exponent of the sequence?

Q3: is the sequence recurrent (that is: every factor appears twice, hence infinitely many times)?

Q4: considered as the binary expansion of a point in $(0,1)$, does it produce a transcendental number?

The sequence is now indexed on OEIS here.

Psychological remark: like most of easily bored personalities, this sequence is a bit of a sad one. Indeed, although trying as much as possible to avoid repetitions at each step, it ends up being more repetitive than its more popular friend the Thue-Morse sequence, which "locally" pursues a completely different goal, but globally achieves less repetitiveness (critical exponent=2).

I add a plot where blue dots represent the length of the longest repeated suffix at every digit, i.e. of the second element in the pair $R_{b_1\dots b_{n-1}}(b_n)$ defined above, putting zero if no suffix is repeated more than once. It turns out that multiple times the sequence up to some digit is itself a square word. 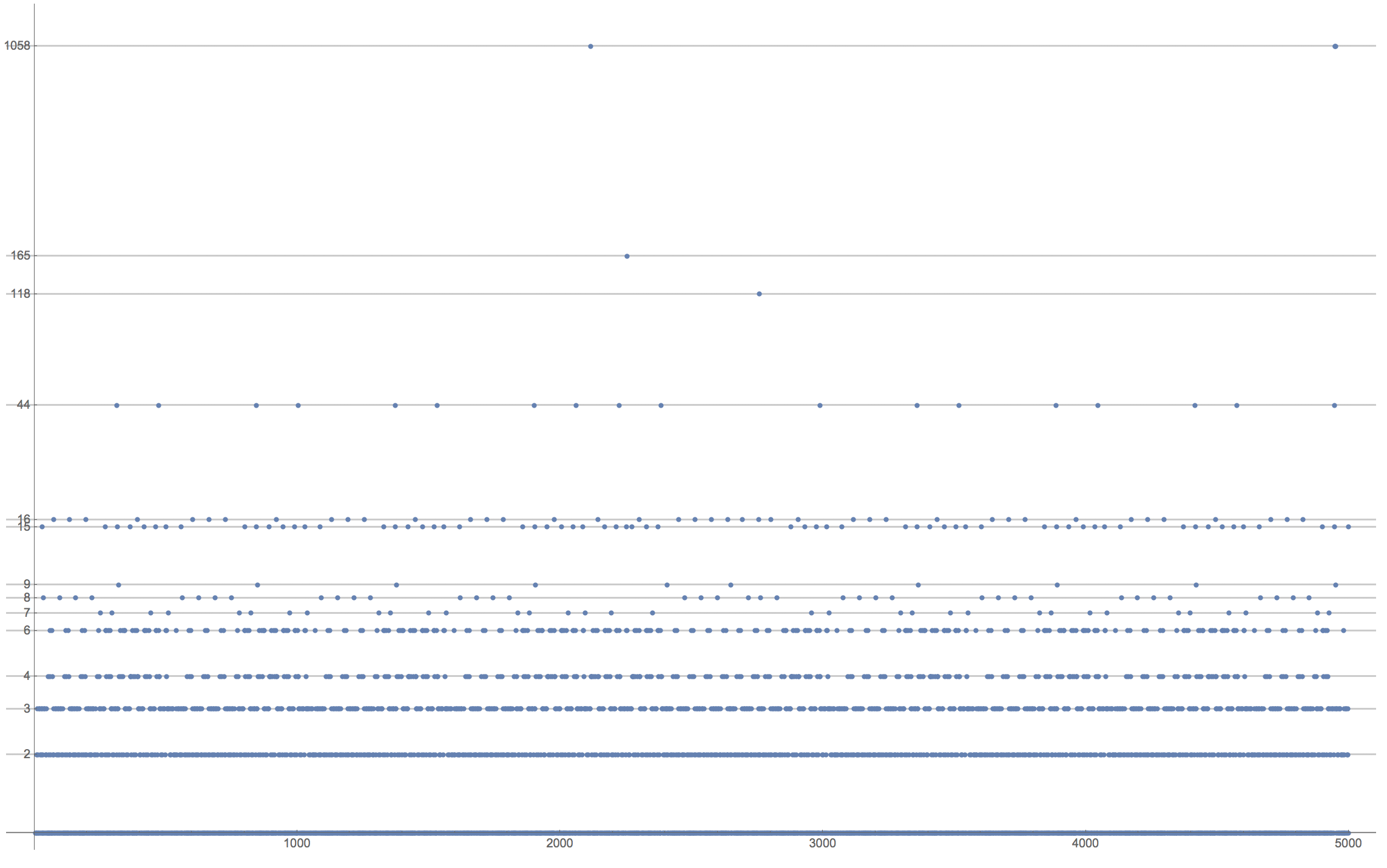 Fact: the set $S$ is nonempty. Sketch of the proof: $\overline{0}\in S$. Indeed the first digit of the sequence $\mathcal{B}(0^m)$ is 1 for every $m$. Therefore, when computing any digit of $\mathcal{B}(\overline{0})$, the process of checking backwords to decide whether to insert 0 or 1 has to stabilize at some point, because looking further back one is certain to find only zeroes, which cannot change our choice. Therefore the limit sequence exists.

In fact, the answer to this question suggests that $S$ may well be of full measure.

8
Breaking efficiently a binary sequence into given strings
1
Nested De Bruijn Sequences
4
Subwords of cube-free binary words
7
Is the density of 1's in the Fibonacci word uniform?
6
Guessing the number of other $1$'s in a binary sequence
3
Binary words that are nonconstant on long arithmetic progressions
2
Binary words starting with arbitrarily long squares
Question feed