What is the modal logic of outer multiverse?

The mathematical multiverse could be viewed as a gigantic Kripke model with models of $ZFC$ as possible worlds connected to each other via a certain accessibility relation.

The modal logic associated with this multiverse has been studied in the case that the accessibility relation is set forcing. According to this interpretation, a statement $\varphi$ in the language of set theory is considered possible if it is true in some set forcing extension and necessary if holds in all of them. For more details see:

Now let's ease the conditions in the above interpretations of the possibility and necessity across the multiverse so that $\varphi$ is possible if it is true in some outer model and is necessary if it holds in all of them. Philosophically speaking, in such an interpretation of modalities, a statement is possible if it could be realized by expanding our world-view and is necessary if it holds no matter how we expand our universe. (Here, Plato's Allegory of the Cave might be relevant where the cave or tight universe is our ground model).

Question. What is the modal logic of the outer multiverse; the set-theoretic multiverse equipped with the outer model relation (rather than set forcing) as the accessibility bridge between the universes?

I've noticed that recently you have asked a few questions about my work, and so let me thank you; you are kind to take an interest.

This particular question can be seen as part of the subject of set-theoretic potentialism, which my co-author Øystein Linnebo and I recently investigated in our paper: 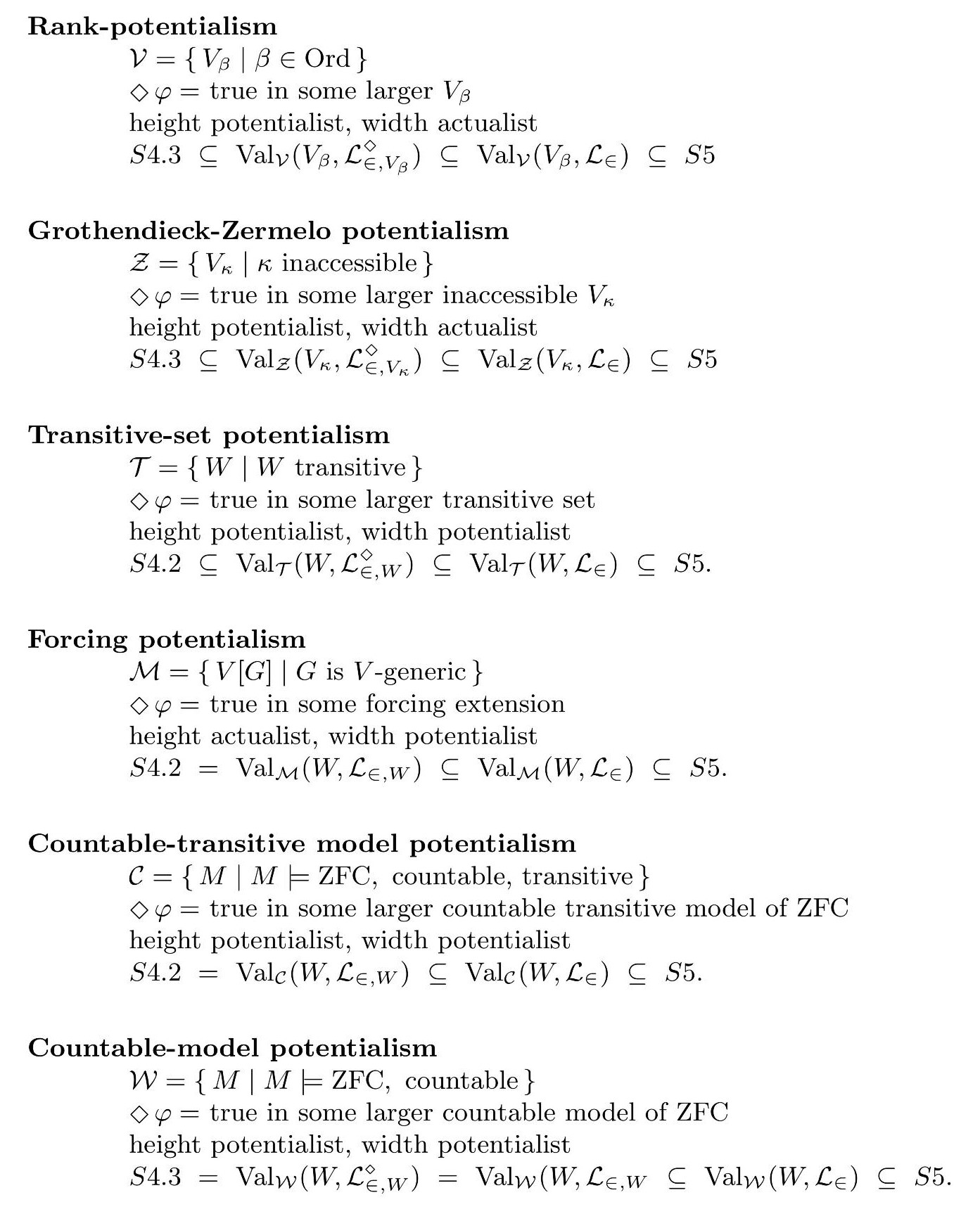 In each case, for each concept of accessibility we determine the corresponding modal logic of that concept of potentialism. In other related work, W. Hugh Woodin and I recently looked at the case of top-extensional set-theoretic potentialism, proving that the modal logic is S4.

(You may also be interested in my more philosophical remarks on this topic at the end of my paper, The modal logic of arithmetic potentialism and the universal algorithm.)

Nevertheless, despite all that, I am very sorry to say that none of these cases are exactly the case you asked about, which is outer-model accessibility. Outer-model potentialism is certainly a natural case of potentialism, and so let me try to tell you what I know about it. Like forcing potentialism, this would be a case of width potentialism and height actualism, since outer models increase only the width of the universe and not the height.

First, let us fix a countable model of ZFC plus V=L, say, and consider it in the context of all its outer models. Since we can force so as to destroy any stationary set in this model, while preserving others, we see that there is an infinite family of independent buttons, "the $n^{th}$ stationary set in the $L$-least partition of $\omega_1^L$ is no longer stationary." This can be made true in an outer model (by forcing) and once true, remains true in all further outer models; and the statements can be controlled independently. And since we also have a family of independent switches arising from the GCH patterns, it follows by the main modal logic analysis (as in Structural connections...), it follows that the modal logic of outer-models is contained within S4.2. And it certainly contains S4, because it is reflexive and transitive.

So the answer to your question this a modal logic between S4 and S4.2.

If you hope to prove that the model logic is S4.2, then usually one does this by proving an directedness or amalgamation theorem. The problem here, however, is that we already know that outer model possibility is not directed, since you can move from a model to outer models in incompatible ways that cannot be amalgamated (this is due to Mostowski). So that avenue of showing (.2) is valid is closed off. I don't know if (.2) is valid for this notion of possibility or not, but I am inclined against it. I think there will be fundamentally incompatible possibily necessary statements, which is to say, railway switches, and this will be incompatible with S4.2.

If you hope to prove that only S4 is valid, then you could follow some of the recent work on the universal algorithm and universal finite sets. The general consequence of the existence of these finite sequences with the universal extension property is that they cause the existence of railyard labelings, which then cause the modal logic to be contained in S4. I don't know if there is any universal finite sequence phenomenon for outer models, and this also is an interesting question.

So I believe that the exact modal logic of outer-model potentialism is an open question.

Not the answer you're looking for? Browse other questions tagged set-theory lo.logic forcing inner-model-theory modal-logic or ask your own question.

3
On the Actual Potential of Virtual Large Cardinals

32
The set-theoretic multiverse as a (bi)category
10
Set-theoretical multiverse and foundations
21
In What Way are Set Theorists' 'Experiences' in the CH Worlds Flawed, if Any?
6
The Ground Axiom for special statements of set theory
6
A specific Model of ZFC
4
Can an ultrapower be undone by class forcing?
22
Set theoretical multiverse and truths
29
What is the dimension of the mathematical universe?
3
On the Actual Potential of Virtual Large Cardinals
Question feed