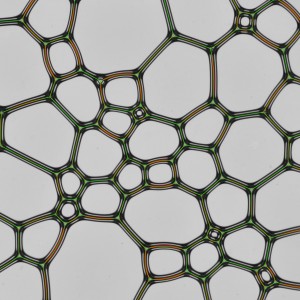 Image from UPenn: "A 2-dimensional foam of wet soap bubbles squashed between glass plates, after 10 hours of coarsening by the diffusion of gas from smaller to larger bubbles." I suspect the answer is No, even though, for example, the average number of sides of a cell is $6$ just as it is for Voronoi diagrams (which is just a consequence of Euler's formula).

Is there a characterization of the graphs (or dual graphs) realized by such planar soap bubbles?

There are two nice connections to generalizations of Voronoi diagrams that I'm aware of.

Moukarzel showed that 2D soap bubbles are sectional multiplicative Voronoi partition (SMVP), i.e. 2D slices (sections) of a 3D generalized (multiplicative) Voronoi diagram where each source $f_i$ has a weight $a_i$ so that a cell $\Omega_i$ in the diagram consists of all points $x$ such that $d(x,i)/a_i<d(x,j)/a_j$ for all $j\neq i$. Note that this is not a bijective correspondence. First, not all SMVP's are realizable as 2D foams, and second, there isn't a unique SMVP associated to a foam, if I recall correctly there's a 3D space of them, as one can translate the sources of the SMVP in two dimensions and set a global scale factor. 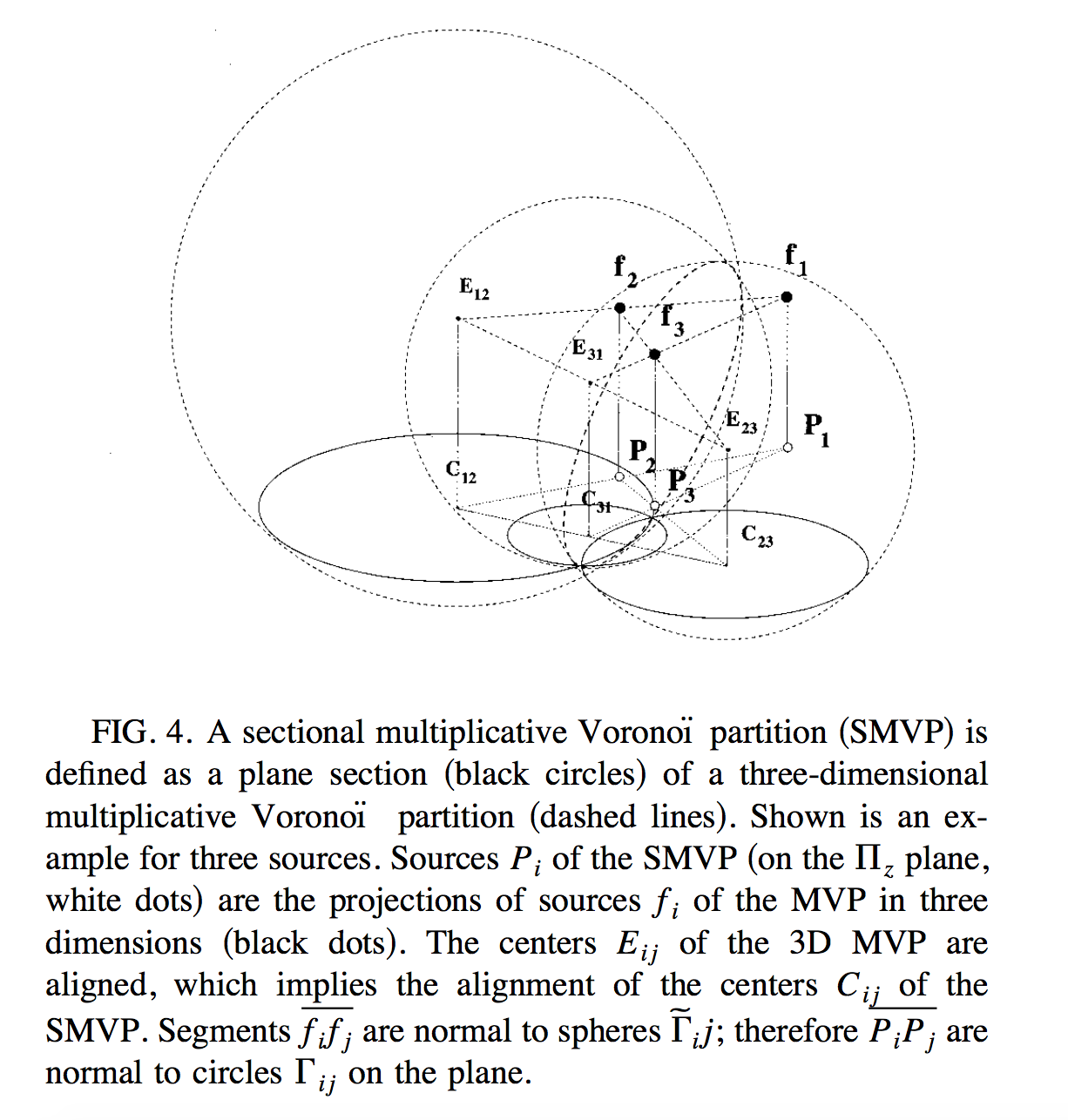 Second, Eppstein showed that the graphs formed by 2D bubbles are precisely the 3-regular bridgeless planar multigraphs. That these conditions are necessary is not too hard to see from Plateau's laws for foam equilibrium. To show that any such multigraph can be realized as an equilibrium 2D bubble, Eppstein uses a construction involving a kind of Voronoi diagram in the Poincaré disk model of the hyperbolic plane. 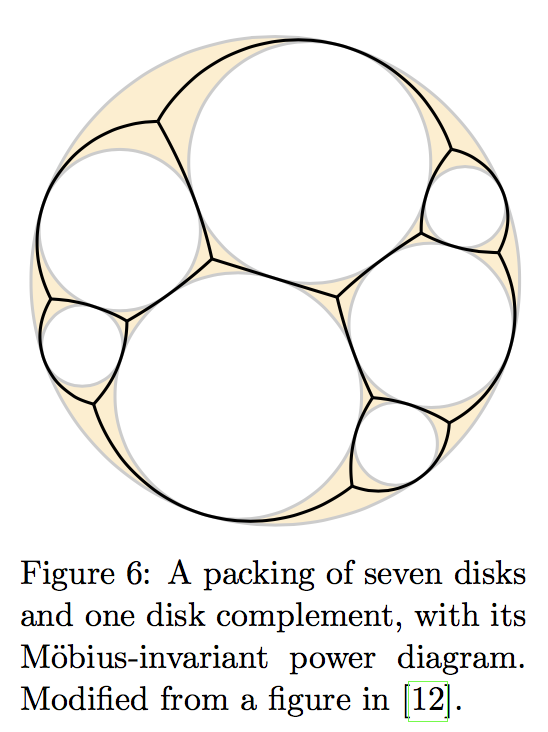 I asked Eppstein about the connection between the two constructions in a comment here but never had a chance to work it out in detail for myself.

The soap froth has a dynamics that Voronoi diagrams lack.

The two-dimensional network of soap bubbles evolves in time according to the area law $$\frac{dA}{dt}=k(n-6),\qquad\qquad(*)$$ where $A$ is the area of a cell, $n$ the number of sides it has, and $k$ a coefficient determined by the surface tension of the bubbles. Supplemented by a mechanism by which a cell can change its number of sides (by switching sides with a neighbour or by merging with a small cell), this dynamics introduces an approximately linear correlation between the area and the number of sides known as Lewis's law.

I was fascinated by this dynamics many years ago, see Two-dimensional soap froths and polycrystalline networks: Why are large cells many-sided? The plot below shows the experimentally observed correlation between area and number of sides of cells (plusses and crosses) and two alternative theories (solid and dashed curves). 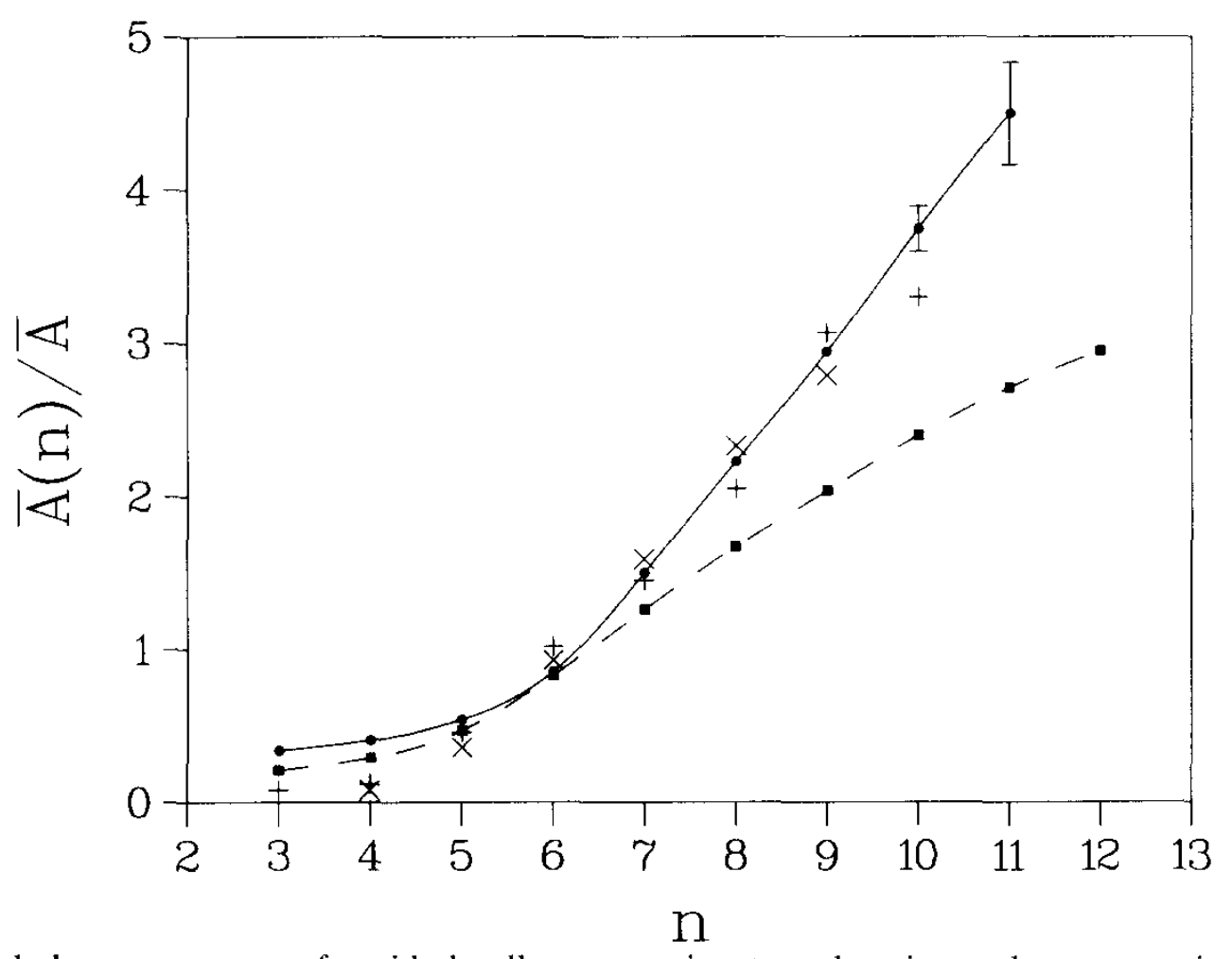 So to represent the soap froth by a Voronoi diagram one would need to reproduce this area-side number correlation. Is that possible?

Searching the web, I noticed the article Mean-curvature flow of Voronoi diagrams by Elsey and Slepcev (2013), that considers the curvature-driven evolution of Voronoi diagrams. It is unclear to me to what extent this is representative of physical soap film networks.

The area law (*) is due to John von Neumann (1951), and follows directly from the fact that the rate of transfer of mass (or area, for an incompressible gas) across the boundary is proportional to the perimeter $dl$ times the pressure difference $\delta p$, while the pressure difference $\delta p\propto\kappa$ is proportional to the curvature $\kappa$ (Young-Laplace law). Upon integration over the entire perimeter we thus find $$\frac{dA}{dt}=k\oint \kappa \,dl=k(n-6),$$ according to the Gauss-Bonnet theorem. Remarkably, neither the shape of the bubble nor its edge lengths matter, and it also does not matter if the edges have a constant curvature. So any six-sided cell maintains its area, irrespective of whether it is surrounded by smaller or larger cells.

Notice that this only works in two dimensions, because in three dimensions the pressure difference is proportional to the mean curvature, while the Gauss-Bonnet theorem gives the Gaussian curvature. There is a generalization (due to Avron and Levine, 1992) to a network on a curved surface, such as a dome of radius $R$, $$ \frac{dA}{dt}=k\left(n-6+3A/\pi R^2\right).$$

This seems to be modeled by the "shortest networks" on which Frank Morgan had run an undergraduate research project. A short description (2 pages) is in:

F. Morgan, Riemannian Geometry. A beginner's guide, Jones and Bartlett Boston 1993. The references there are:

4
Algorithm for Reconstructing Point Sites from a Voronoi Diagram