In the recent question on "eventually oscillating function" I had a heuristic for the function $d(x)$ that its amplitude is constant, but could not further describe that function. I just found a relation to a possibly wider context of alternating series with two-way-infinite bounds. But still I cannot prove my observations with my knowledge.

I experimented with a reformulation of $f(x)$ as a double-series (by expansion in the exponential-series for each term) and change-of-order of summation, which surprisingly did not give the expected evaluation to $f(x)$. Instead that gave a smooth and non oscillating function $g(x)$ which can be seen as a "center", a "body" or "the mass" for $f(x)$ such that the difference $d(x)=f(x)-g(x)$ can be seen as its "decoration". The much interesting aspect is, that it seems to capture perfectly the slight oscillation of $f(x)$ and even has a perfect constant amplitude.

The focuses of this question here are:

I've got now one more heuristic which allows to connect this with a much wider field: that of the two-way infinite alternating "iteration series" (let's call it "AIS") which I'll explain in short below. The same effect occurs in such AIS in the context of tetration, and can even be looked at, when the doubly infinite alternating geometric series is expressed as AIS - but in the latter case the amplitude of the associated function $d(x)$ is zero, effectively saying that $ \sum_{k=-\infty}^\infty (-1)^k x^k = 0$ for all $x$, which is known to be true.

That observation seen as property of an AIS has a wider range of relevance ; I found it in the same way in the study of iteration series of the tetration (see here and specifically here), where for instance $r(x) = b^x$ with $b=\sqrt 2$ and the lower fixpoint $2$ and the upper fixpoint $4$ with some initial $x_0$ in between. Again the amplitude of the resulting function $s_b(x)$ is constant over $x$, but decreases with $b \to 1$ and increases with $b \to \eta $ where $\eta = \small \exp(\exp(-1))$

Moreover, if I look at the geometric series with quotient $b$, then the base function becomes $r_b(x)= x \cdot b$ and the resulting AIS $s_b(x)$ has amplitude zero for all $x$ . (which is a known fact).

(thus, that the expansion into and then evaluation of the double series does not give $g(x)=f(x) \quad (=s_\text{lo}(x))$ as naively expected but rather the counterintuitive one)

One open question in my answer was that of the wavelength/frequency shift of the function $d(x)$. If it is indeed $d(x) = s(x)$ then the periodicity of the function and the constancy of its amplitude is, as I already said, simple to understand. But for the AIS with $r_b(x)=x^b$ with general $b \gt 1$ it is also the fractional $h$'th iteration directly expressible as $x_h = x^{b^h}$ for continuous $h$. Expressed now in terms of $h$ the periodicity of $d_b(x_h) = s_b(x_h) $ is then perfect. It is also very near to the sine-curve with precision up to the 6'th or even further digit. Last question:

[update] Added pictures which illustrate the near-sine-form of $d(x_h)$ when the abscissa shows the iteration-height $h$
$f(x)$ and $g(x)$ are very similar; the oscillation of $f(x)$ is difficult to recognize. Thus that oscillatory aspect $d(x)$ is shown with another scale (red, scale on the right side of the graph) 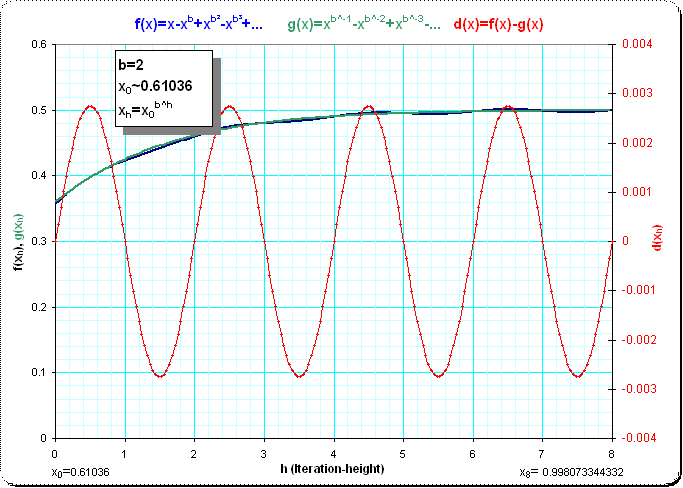 The function $d(x_h)$ when reciprocally scaled by its amplitude is nearly a perfect sine wave; the difference is hardly visible. The curves for $d(x_h)$ and the sine-wave are perfectly overlaid in the picture; the difference as $err(x_h)$ in blue has its own scale on the right side of the graph: 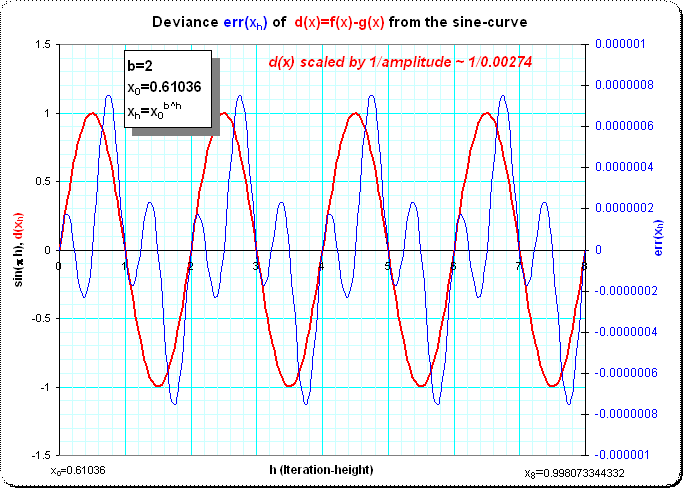 Browse other questions tagged ca.classical-analysis-and-odes sequences-and-series or ask your own question.

50
On an example of an eventually oscillating function
0
Is there an option to handle Neumann-series when it diverges? (using infinite-sized Carleman matrices)

6
linear order in a group of functions
7
Have commuting functions a common value ?
0
Cesaro mean of iterates of function with non-attractive fixed point
3
Zeros of the Hadamard product of holomorphic functions
2
Is there a standard integral that can be used to evaluate $\int_{0}^{\infty} e^{-t}t^{a-1}\left[ L_{n}^{a+1} (t)\right]^{2}dt$
3
"Lagrange inversion" around an extremum
Question feed