The class of uniformly accelerated curves and surfaces

Once upon a time I was travelling by train and noticed an intresting optic effect I started to think about in terms of math. Let's consider two examples of curves: 1)The curve defined by the differential equation in polar coordinates $r'(t)^2 + r(t)^2 = t^2$ with $r(0)=0$, $r"(0)>0$

It is easy to see that the junction point of the curve and the ray uniformly rotated in the origin coordinates moves uniformly accelerated.

2) The curve defined by differential equation

$y'=\sqrt{A^2x^2-1}$, where $A$ - const >0; the junction point of the curve and the ray uniformly moved along abscissa axis moves unifromly accelarated - 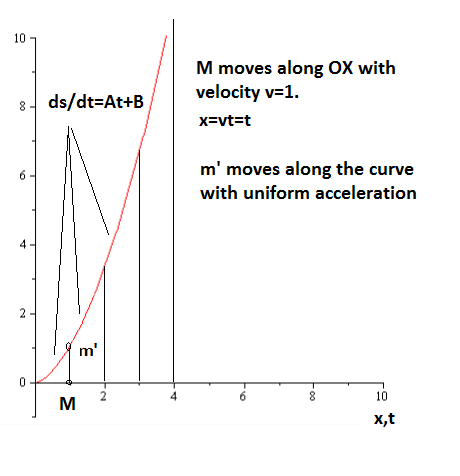 One may to create similar examples where we get the unifromly accelerated curves. My question what is the simplest way to describe all kind of curves ( or even surfaces)?

I don't know what you might mean by 'uniformly accelerated surface', but I think that, by 'uniformly accelerated curve', you mean a curve in the plane parametrized in such a way that its velocity at time $t$ is a(n inhomogeneous) linear function of $t$, i.e., in Cartesian coordinates, it would be a curve $\bigl(x(t),y(t)\bigr)$ that satisfies an equation of the form $$ x'(t)^2 + y'(t)^2 = (at+b)^2, $$ where $a$ and $b$ are constants (not both zero).

The curves for which this formula does not work are the ones for which $u$ is constant, but these are just the straight lines in the plane, parametrized so that the velocity changes linearly in time, and these are easily written down.

Not the answer you're looking for? Browse other questions tagged dg.differential-geometry real-analysis curves-and-surfaces or ask your own question.

7
Shortest paths on linked tori
5
Relationship between the focal locus and the cut locus
5
How to draw Archimedean-Galileo spiral?
20
What is the analog of the "Fundamental Theorem of Space Curves," for surfaces, and beyond?
2
Mean curvature vector approximated for the discrete Laplace Beltrami Operator
Question feed