Question. Assuming that $T_1(\Lambda)\cap T_2(\Lambda)=\varnothing$, are there closed formulae for the Hausdorff and box-counting (Minkowski) dimensions of $\Lambda$?

I know that there are plenty of papers on this subject but it looks like every time I follow yet another link, I only fall further down the rabbit hole...

I'm going to expand on Gerald's answer. Indeed, there is no known general formula for the Hausdorff and/or box counting dimension of self-affine sets, even in your situation which is a priori the simplest possible (ambient dimension $2$, only two maps, and strong separation).

Falconer's classical theorem from "The Hausdorff dimension of self-affine fractals" says that if $\alpha<1/2$, then for almost every choice of translations $v_1,v_2$, the Hausdorff and box counting dimensions of $\Lambda$ agree and are given by what has come to be known as the affinity or singularity dimension. However, even this number is defined as a limit which is impossible to compute or even estimate rigorously outside of special cases, so it is definitely not a closed formula.

Edit: when all affine maps have the same linear part, as in the question, or when all linear parts are diagonal, there are explicit formulas for the affinity dimension. It seems the case Nikita is interested in satisfies both of these assumptions.

There are some settings in which the Hausdorff and/or box-counting dimensions can be calculated, even explicitly, or at least where they can be shown to equal the affinity dimension. Generally speaking there are two lines of research in this direction: trying to verify Falconer's formula in special cases (obtaining sure rather than almost sure results), or looking into self-affine carpets which are exceptional in the sense that the special alignment makes Falconer's formula fail. Let me know if you want some references.

Edit after Nik's comment: in the diagonal case, the box dimension calculation becomes easier, but only assuming the rectangular open set condition (ROSC) - defined as the existence of an rectangle $R$ with axes-parallel sides such that the images $T_1(R), T_2(R)$ are non-overlapping. I think this can't hold if both eigenvalues of $A$ are larger than $1$. However, assuming ROSC, D.J. Feng and Y. Wang ("A class of self-affine sets and self-affine measures", Corollary 1) give an explicit formula for the box-counting dimension in terms of the projections of the set. In turn, when the linear parts agree and have norm more than $1/2$, it is well known that the relevant projection contains an interval, in particular is of dimension $1$, so the Feng-Wang formula becomes completely explicit.

For Hausdorff dimension things are much more difficult, even in the diagonal case, but M. Hochman's recent breakthrough on self-similar measures ("On self-similar sets with overlaps and inverse theorems for entropy") can be used to gain much better information than we had before (only in the diagonal case). An example (or class of examples) is in my recent preprint with J. Fraser, and we are currently working on developing this further.

In general, no: I believe there are no known closed form formulas for this. There is a formula (for $\alpha$ small enough) of Falconer that is good for "almost all" cases (in the sense of Lebesgue measure, almost all choices for the vectors $\mathbf{v}_i$). [1]

But the measure zero exceptional cases can include situations where the images are disjoint. [2]

As the previous two answers correctly indicate, there is no simple, closed form expression for the dimension of a self-affine set. Here is a concrete example illustrating why we might expect difficulty in finding such a formula. While not a proof, it at least shows that dimension is discontinuous with respect to the IFS.

This is not my example. I believe I learned it out of one of Falconer's books but I don't have the reference immediately handy. 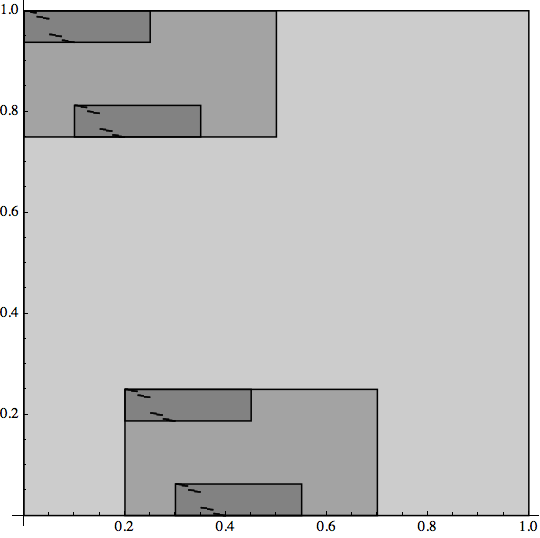 We see the image of the large square under the two functions as rectangles in the upper left and lower middle. Inside those are smaller rectangles formed by the second iterate of the IFS. Inside those is an approximation of the attractor. The key observation is that there is overlap between the projections onto the $x$-axis of each rectangle in every approximation. As a result the projection onto the $x$-axis of the fractal attractor is an interval and, therefore has dimension at least one. This picture is for $\alpha=0.2$ but is indicative of the behavior for all $\alpha>0$. 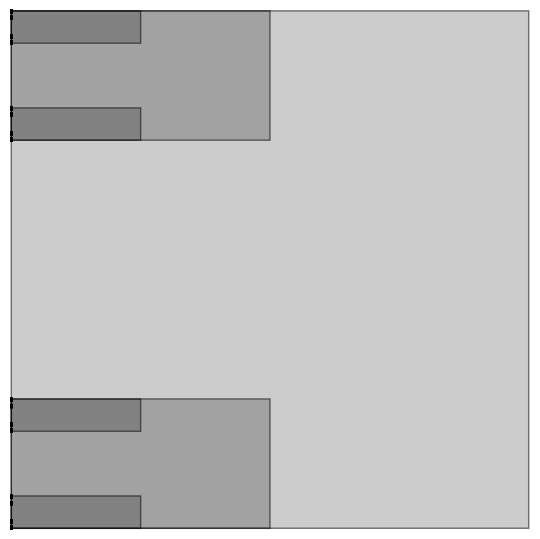