Wrapping a convex polyhedron with string

This is a meta-question, rather than a specific mathematical question. I am seeking a mathematical definition that captures the following physical idea.

Suppose you have a convex polyhedron $P \subset \mathbb{R}^3$. I would like to "wrap" $P$ with string so that (a) the entire surface area is covered with string, and (b) the string does not tend to slip off, even with minimal friction. The closest related literature I've found is this paper: 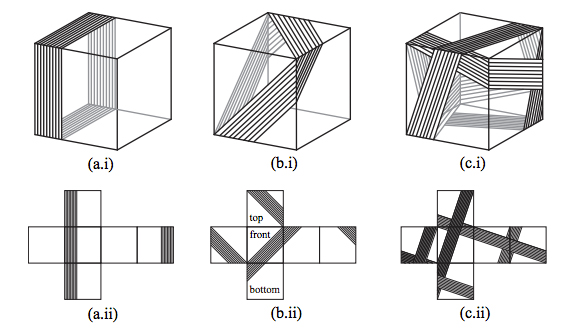 I am seeking a mathematical definition of what it might mean to "wrap without slippage." Then the natural follow-on question is to minimize the total string length, for a given $P$, and given string thickness $\delta$. But first I need a clear defintion! Any help would be appreciated—Thanks!

PS. I am familiar with the closely related work by Demaine, Demaine, and Mitchell.

I'm not sure about the corners, but the discrete analogue of geodesic for a convex polyhedron is a sort of Snell's law, the angle approaching an edge must equal the angle of the string leaving the edge. Consider that the string has no idea it is in three dimensions, so if you cut out those two adjacent faces and fold them flat, you see that the path of the string can be shortened unless it is a straight line in the flat unfolded plane.

Note that when you fold it back up, this condition may be tricky to interpret.

Well, that's a start. Maybe they say it in one of your articles.

Yes, in your illustration c(ii), different choices of how to unfold the cube might make it possible to show one of the bands in full length as a bunch of parallel straight lines. Worth trying to draw that, label the faces and edges and all and see how well that goes. I'm not saying some arbitrarily complicated polyhedron can be unfolded in such a fortunate way.

Alright, I misunderstood the illustration a bit, (c.ii) is a single band of strings. So there is no way to unfold the cube to get everything resembling straight lines. Meanwhile, I think the rule for corners should begin with this: no string is permitted to go along an edge. There must be a way to decide, essentially by continuity, which polygon comes next. Need to think about other ways to say that...For the cube, it is impossible to implement this rule. Any string hitting a vertex, in the unfolded triple of squares, has only open air ahead of it, so the choice of where to go next in the cube is arbitrary and physically unstable. Not looking good for head on collision with a vertex.

EDITTTTT: It seems Misha wins. I did a little experiment with a regular (pentagonal) dodecahedron. Given a short segment that passes through a vertex and is orthogonal to the joint edge of two neighboring faces, and is given equal length on both faces, it is still shorter to slip the string off the vertex and take the "geodesic" that passes through the third pentagon at that vertex. So my one scheme, involving large angles, is still hopeless.

You may not be able to use one piece of string.

Of course one thinks of geodesic for this problem, but one needs a global condition, perhaps an energy functional, to consider slippage. Consider wrapping a regular octahedron: each string winding goes around six faces. In fact, maybe you want a cover by rubber bands instead of winding of a string. OK, each winding has the same length, and you will worry about the other two faces later, but what happens if you have a perturbation where one of the two faces is larger? Now the winding will slip off. The limiting case of a cone will be most challenging, as will many frustrum-shaped pieces. (Frustrum -- frustrating? This may be more than coincidental.). If you come up with a definition, test it with a cone or similar shape. You might be able to prove that certain bicones are impossible to wind.

Another possibility is to modify reality. Use a spot of glue to fix a string end, and then wind so that the spot keeps the string from slipping. Then you might get the physical cover you want without worrying about energy states.

Here's a possible definition, that works at least for the cube, and avoids asking about what the thickness of the string means. Suppose you have a cover of your polyhedron by geodesics, such that every point is covered a bounded number of times. Then you can define the total length of string used in the cover to be an area measure (not a length measure), the integral over the polyhedron's surface of the number of times each point is covered. For instance, for the unit cube shown in your illustration, cover (a) repeated in two different directions covers the cube with total area 8 (average coverage of 4/3 ply per point).

However for more general polyhedra even a single geodesic might not meet up with itself, so in these cases there will be no way of wrapping a finite length of string around the polyhedron without slipping.

Not the answer you're looking for? Browse other questions tagged reference-request mg.metric-geometry discrete-geometry polyhedra combinatorial-optimization or ask your own question.