A convex polyhedral analog of the pentagram map

I am wondering if there is a three-dimensional analog of the pentagram map, which maps a convex polygon to another convex polygon. Here's the Wikipedia image:

You may know that the pentagram map has been heavily studied, e.g., by Valentin Ovsienko, Richard Schwartz, and Serge Tabachnikov:

I would be content with a geometric analog, without duplicating the nice moduli-space properties enjoyed by the pentagram map. In particular, I have a definition in mind, and would like to know if it, or something similar, has been explored in the literature.

If the points in $N(v)$ are coplanar, $H(v)$ could be considered a doubly covered polyhedron, in which case $H^+(v)$ is just the halfspace (away from $v$) determined by its "top" side.

For example, if $P$ is a cube, $N(v)$ is three points and $H^+(v)$ is the halfspace determined by that triangle, excluding $v$. Thus $P$ gets mapped to an octahedron: 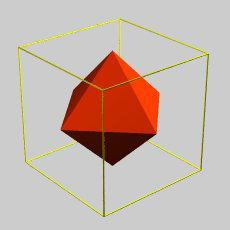 Note that this 3D map is an analog in a sense of the 2D pentagram map, for in the latter $N(v)$ is the pair of vertices adjacent to $v$, and $H^+(v)$ is the halfplane determined by the diagonal connecting them.

Unfortunately the map is only easy to construct "by hand" for regular polyhedra, where it is relatively uninspiring; otherwise I'd include a more interesting example.

Thanks for any pointers to related literature! 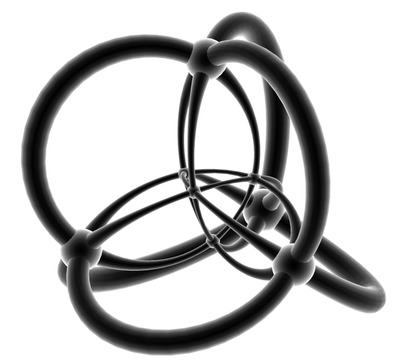 Now, given a 4-polytope that has the same combinatorial type as the 4-dimensional cross-polytope, you can do the following operation:

In the paper "On generalizations of the pentagram map: discretizations of AGD flows", [arxiv link] (cited in the now very detailed Wikipedia article rewritten by Richard Schwartz), Gloria Marí Beffa studies an analogue of the pentagram map in higher dimensional projective spaces and related them to integrable PDEs called "Adler-Gel'fand-Dickey flows". This doesn't address your question though because her construction is on polygons in $\mathbb{RP}^m$, not polyhedra. Nonetheless, you may still find the construction geometrically interesting.

The pentagram map and its generalizations are actually defined on a larger set of geometric objects than just polygons. Let $\{x_n\}$ be a map from the integers into projective space such that $x_{n+r}=Mx_n$ for some projective automorphism $M$. These are the positions of the points of an $r$-twisted polygon in $\mathbb{RP}^m$. If $M$ is the identity, then we just have a sequence which iterates over a $r$-gon repeatedly. As is usual, below we will only consider "sufficiently generic" points in the space of twisted polygons. 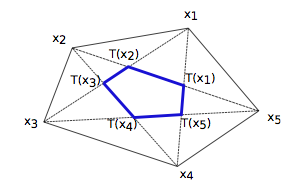 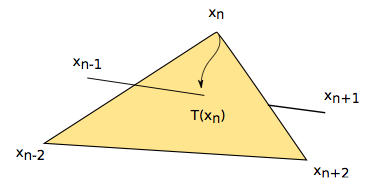 In the large $r$ limit, the pentagram map can be interpreted as a discretization of the Boussinesq equation. The Boussinesq equation is apparently one of the simplest of the AGD flows, and Beffa conjectures that a version of her construction with one $k-1$ dimensional subspace and $k-1$ $m-1$ dimensional subspaces is a discretization of a $k$-AGD flow. The generalization above is one case of this conjecture that she has proved.

Unfortunately, I don't know enough about integrable systems of PDEs or AGD flows to really describe the relations between the objects at stake here. Hopefully I didn't get things too wrong...

It seems to me that the key geometric feature of the pentagram map and its analogues are the fact that they commute with projective transformations (at least this is a feature that leads to these remarkable connections with integrable maps). Does your analog also have this property?

Edit: Felipe and Beffa have since written a paper generalizing the pentagram map to polygons in Grassmannians. I was still unable to find any generalization involving higher-dimensional polytopes.

Not the answer you're looking for? Browse other questions tagged reference-request mg.metric-geometry convex-polytopes moduli-spaces or ask your own question.