I know from Marcel Berger's Geometry Revealed: A Jacob's Ladder to Modern Higher Geometry (p.531) that it is not yet established which polyhedron in $\mathbb{R}^3$ on 8 vertices achieves the optimal isoperimetric ratio $A^3/V^2$, where $A$ is the surface area and $V$ the volume. Berger says "We also know that the cube ... [is] not the best for $v=8$" (where $v$ is the number of vertices).

Many other aspects of isoperimetry for polyhedra are unresolved, but this one especially interests me. It is not even clear to me that it is known that there is an optimal polyhedron for each $v$. I've been trying to imagine what would be a strong candidate for an optimal 8-vertex polyhedron. I've been unsuccessful in finding information on this, although it seems likely to have been explored computationally. Does anyone have a candidate, or know of one proposed/calculated? A pointer or reference would be greatly appreciated. Thanks!

Addendum. From the reference Igor provided (Nobuaki Mutoh, "The Polyhedra of Maximal Volume Inscribed in the Unit Sphere and of Minimal Volume Circumscribed about the Unit Sphere," 2009), here is a piece of Mutoh's Fig.1, which computationally verifies the earlier derivation of the max volume inscribed 8-vertex polyhedron by Berman and Haynes ("Volumes of polyhedra inscribed in the unit sphere in $\mathbb{R}^3$," Math. Ann., 188(1): 78-84, 1970, doi: 10.1007/BF01435416, eudml), as mentioned in the comments: 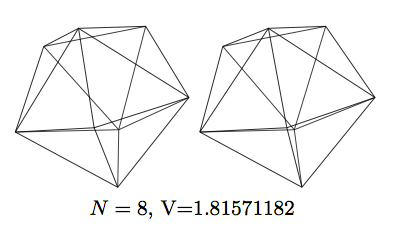 This is surely a candidate for achieving the min of $A^3/V^2$! I thank Jean-Marc, Igor, and Anton for the rapid convergence to what I sought.

...And then a bit later to Henry for showing that this candidate does not in fact achieve the best ratio! Here is Henry's polyhedron, if I have interpreted him correctly:

An $8$-vertex polyhedron can achieve an isoperimetric ratio of $A^3/V^2 = 159.3243297053\dots$, and based on some quick experiments I'm pretty confident this is optimal (although I wouldn't be shocked if it could be beaten).

For comparison, the maximum volume polyhedron inscribed in a sphere has a worse isoperimetric ratio, namely $162.248792\dots$. For the cube, it's $216$.

In general there's no reason to expect the optimal polyhedron to be inscribed in a sphere. The $5$-vertex case is a particularly nice example: it consists of an equilateral triangle on the equator of the unit sphere together with $1/\sqrt{2}$ times the north and south poles. This achieves an isoperimetric ratio of $243$, and I'd be very surprised if that's not optimal. Five vertices is few enough that a rigorous proof may be possible, but I can't think of a non-painful way to do it.

Not the answer you're looking for? Browse other questions tagged reference-request mg.metric-geometry convex-polytopes convex-geometry isoperimetric-problems or ask your own question.