There are other examples of $\infty$-categories, especially from algebraic topology or algebraic geometry, but also mathematical physics and computer science and logic? In particular I am wondering if there's a concrete example, well known, weak $(\infty,\infty)$-category.

(Edit:) after the a discussion with Mr.Porter I think adding some specifications may help:

As per Todd's suggestion I am posting this as an answer.

The $(\infty, n)$-category of bordisms is an important example for many reasons, the most imporant of which is its role in the Baez-Dolan cobordism hypothesis. There are several constructions of it, but one of the more modern ones, in the language of $(\infty,n)$-categories ($n$-fold complete Segal spaces), is given in Jacob Lurie's On the Classification of Topological Field Theories.

I think it's worth mentioning the examples of weak $\infty$-groupoids constructed from type theory due to van den Berg and Garner and Lumsdaine. These examples are constructed out of syntax and so are very concrete in a certain sense (cf. Tom Leinster's answer). These models of $\infty$-groupoids arise from Martin-Löf type theory which was designed in such a way as to exhibit good computational properties. So there is a certain sense in which it is possible to compute with types (although it is a more technical sense of "compute" than you may have in mind). Of course, one expects that many of these examples (at least of $(\infty,1)$-categories) to be very closely related (as are, e.g., fundamental groupoids of spaces and Kan complexes).

This probably isn't "well known", and you might think it's cheating. Nevertheless, it's a very concrete, maximally weak, example of an $\infty$-category that isn't an $(\infty, n)$-category for any $n < \infty$. It's simply the free $\infty$-category on one cell in each dimension.

A concrete example of a weak $\infty$-category, but not well studied abstractly, is the cubical singular complex of a space, preferably with the connections introduced in our 1981 JPAA paper with Philip Higgins. The clear advantage of the cubical setup is the command of multiple compositions, using an easy matrix notation. Thus one can express for the diagram 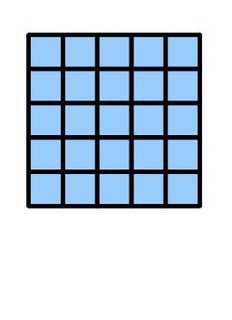 that the big square is the composition of the little squares, by simply writing something like $\alpha=[\alpha_{ij}]$. (How does one do that simplicially, or globularly?) This and higher dimensional versions are useful in expressing algebraic inverses to subdivision, a useful tool in local-to-global problems. Because higher groupoids are nonabelian, unlike higher groups, one can also obtain nonabelian results in algebraic topology.

It's plausible that there's a translation between the notion of an "$A_\infty$ disk-like n-category" (c.f. my paper "The blob complex" with Kevin Walker) and the usual notion of an $(\infty,n)$-category. (Roughly, the only difference should be that disk-like requires lots of duality.)

In that case the blob complex of an $(n{-}k)$-manifold with coefficients in any disklike $n$-category gives an $(\infty, k)$-category.

The obvious concrete example is any Kan complex considered as a weak infinity groupoid. If that is not concrete enough, take a space and its singular complex is a weak infinity category. If you want category as against groupoid, the homotopy coherent nerve of a simplicially enriched category $\mathcal{B}$, is another example (provided $\mathcal{B}$ is `locally Kan' i.e. fibrant.) Thus setting size issues aside, the category of topological spaces yields an infinity category. (Look up homotopy coherent nerve in the nLab if you need. It is a very neat idea.)

(Edit: I should have started by asking what `concrete' means for you.)

(Edit number 2:) I see my original answer did not address the last part of the question. For that you are requiring morphisms in all dimensions to be potentially non-(invertible up to higher cells) so there is a non-reversiblility about things. Chris's examples give some idea of this but there is a nice set of ideas that have not been fully explored as yet that may give another. The context in which this arises is that of directed homotopy. This arises is computer science when modelling concurrent and distributed computing. An action takes time and resources, so is non reversible. If you model things by a directed space (and there are various interpretations of that idea see Marco Grandis' book for instance), and then use directed $n$-simplices for all $n$ and the test spaces, you get a singular complex with quite `singular' properties! (Look at directed space in the nLab for some ideas of what is going on here.) I tried to capture some of this in a paper (Enriched categories and models for spaces of evolving states, Theoretical Computer Science, 405, (2008), pp. 88 - 100.) The structure would seem to be related to the Segal category types constructions, but an adequate description is still lacking.

The challenge is then to solidify this link and then to find out if it does give an adequate model of the sorts of situation modelled by the directed spaces in the first instance.

Not the answer you're looking for? Browse other questions tagged higher-category-theory at.algebraic-topology ag.algebraic-geometry mp.mathematical-physics lo.logic or ask your own question.