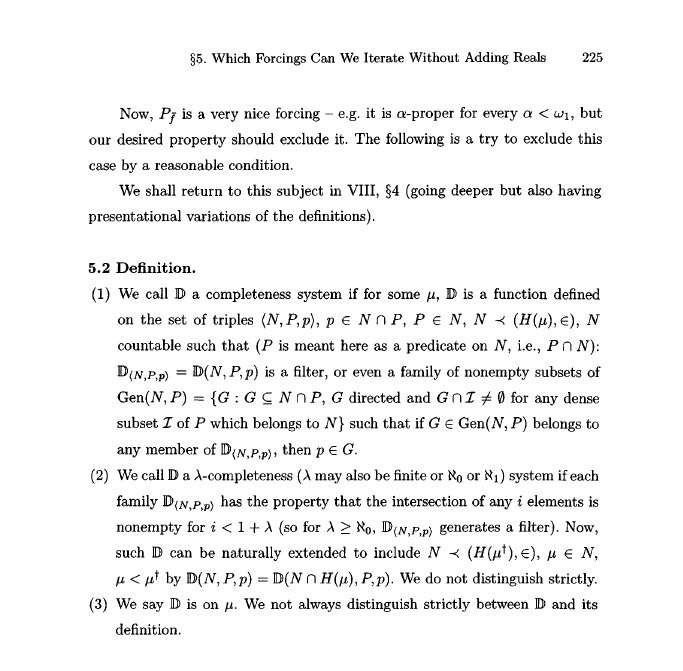 The relevant property Shelah wants to generalize is that if $\mathbb P$ is $\sigma$-closed, $\mu$ is sufficiently large and $N \prec H_\mu$ is a countable model containing $\mathbb P$ and some condition $p$ then $any$ generic $p \in G \subseteq \mathbb P \cap N$ over $N$ has a lower bound (it can be argued that this is what's really used in a lot of arguments involving $\sigma$-closed forcing). Roughly the idea for the generalization is to replace $all$ generics by $most$ generics (say a "measure one set") i.e. an element of a suitable filter of subsets of $Gen(N, \mathbb P, p)$.

Uri Abraham's chapter in the handbook also discusses $\mathbb D$-complete forcing and the definitions and discussion there might help clarify things as well.

Not the answer you're looking for? Browse other questions tagged set-theory lo.logic model-theory forcing or ask your own question.

3
Equivalent definitions of $(M,P)$-genericity
7
Which of these relations on partial orders allows us to identify forcing equivalence?
5
Hereditarily Countable Names and Proper Forcing
6
Question about Shelah's version of “Shooting a club” found in PIF
11
Class Forcing and Genericity: Predense sets vs Dense classes
7
Is the forcing relation defined for mathematical formulas?
7
On the definition of $\alpha$-proper poset
6
Gorelic's Forcing for large Lindelöf spaces with points $G_\delta$
Question feed