Inspired by the Smith conjecture, is there a finite group action on $S^3$ (by smooth or analytic diffeomorphisms) which possesses an invariant knotted circle?

I think the comments answered the question, but it seems like some pictures would be helpful as well. There are many examples, but one of my favorites is this paper by Sakuma which concludes with a table of knots preserved by orientation-preserving involutions on $S^3$ which reverse the orientation on $K$.

I also want to point out that in general studying prime order group actions is not sufficient. For example, you may ask if the figure eight knot $4_1$ is preserved by a symmetry which reverses the orientation on $S^3$, but preserves the orientation on $4_1$. This is the case, but the symmetry has order 4 (and there is no such order 2 symmetry). Visually, this can be seen in the following image as a $\pi/2$ rotation within the plane of the diagram followed by a reflection across an $S^2$ intersecting the diagram in the shown dotted green circle. 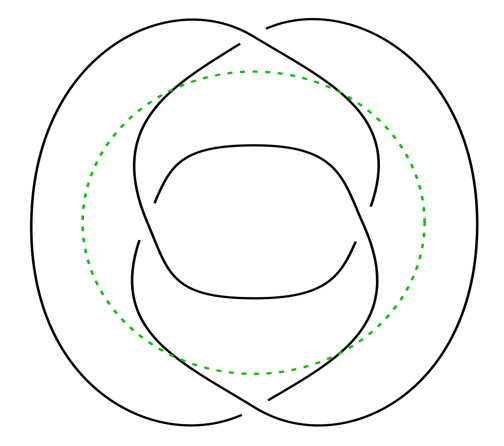 Not the answer you're looking for? Browse other questions tagged dg.differential-geometry differential-topology knot-theory 3-manifolds group-actions or ask your own question.