Is this representation of Go (game) irreducible?

This post is freely inspired by the basic rules of Go (game), usually played on a $19 \times 19$ grid graph. 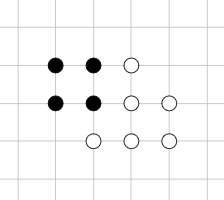 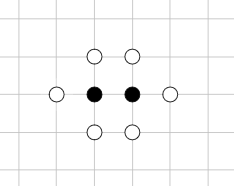 A state $\phi$ is finite if $|\phi^{-1}(\{b,w\})| < \infty$, and is admissible if all its connected components $c$ have at least one liberty. Let $\mathcal{F}$ be the set of finite admissible states. Let $g \in \mathbb{Z}^2$ and consider the map $B_g: \mathcal{F} \to \mathcal{F}$ such that if $\phi(g) \neq e$ then $B_g(\phi) = \phi$, else $B_g(\phi)$ is the state made by first putting the vertex $g$ to the state "black", then removing every white connected component without liberty, then removing every black connected component without liberty (suicide allowed).
See the following examples:

Question: Is $H$ an irreducible representation of $\mathcal{A}$?

If yes, this means that the von Neumann algebra $M:=\mathcal{A}''$ equals $B(H)$, the algebra of all bounded operators. Else, what is $M$?

Remark: these questions can be extended to any finitely generated group $\Gamma$ where the grid becomes its Cayley graph. It should again be extended to any vertex-transitive graph, where for any vertex $g$, $\Vert B_g \Vert^2$ should "intuitively" be $2^d$ (with $d$ the degree of the graph). The extension to any connected graph could reveal problems with unbounded operators; to avoid that we can assume the graph to be $k$-regular (with $k$ finite), or at least the degree of valency of the vertices to be bounded.

We could experiment these questions on some small finite graphs by brute force with a computer.

20
How many ways are there to globalize Harish Chandra modules?
8
Local complementation in undirected graphs
3
The game of removing two vertices in a graph
3
Probability that a randomly filled Go board has a set of white stones connected through their von Neumann neighborhoods
0
Generate all non-isomorphic partitions $\pi = \{ \{1, ..., n-1\}, \{n\} \}$ for all graphs of order $n$
8
The graph of Rule 110 and vertices degree
1
Probability for a group of stones to live on an infinite Go board
Question feed