Convergence of a sequence by iteration

I am very interested in the convergence of $(x_n)_{n\ge 1}$. First this sequence is bounded by definition. Second, it follows from definition that

PS: This problem does not seem deep, but I still have not found a complete answer after discussing with people.

(Skip the initial two – or even three – paragraphs for the actual solution).

The equation $$x_{n+1} - x_n = \nabla F(x_n) - x_n$$ seems to be a discretised version of $$x'(t) = \nabla F(x(t)) - x(t).$$ The vector field $\nabla F(x) - x$ is conservative, with scalar potential $|x|^2/2 - F(x)$ which is confining (that is, it goes to $\infty$ at infinity). Thus, the gradient flow will converge to the set of critical points of the potential. In a typical situation, this set is discrete, in which case the answer for the continuous problem is affirmative (although the limit need not be unique: it may depend on the initial value). If, however, you choose a sufficiently nasty potential, the gradient flow may fail to converge.

Now let us try a similar approach for the discrete equation: write $G(x) = |x|^2/2 - \nabla F(x)$, so that $x_{n+1} - x_n = -\nabla G(x_n)$. This is the gradient descent sequence for the function $G$, with a constant parameter. It is well-known that gradient decent may fail to converge if the parameter is too large, compared to the second derivatives of $G$. However, in our case the second derivative of $G$ in any direction is bounded by $1$, which is precisely what we need.

OK, I cheated: the actual solution starts here. What happens if the set of critical points of $G(x) = |x|^2/2 - F(x)$ is not discrete? It turns out that $(x_n)$ may fail to converge! It is difficult to describe a counterexample, and I did not check every detail; roughly speaking, the graph of the function $G(x)$ described below is an infinite spiral ramp around the unit disk. 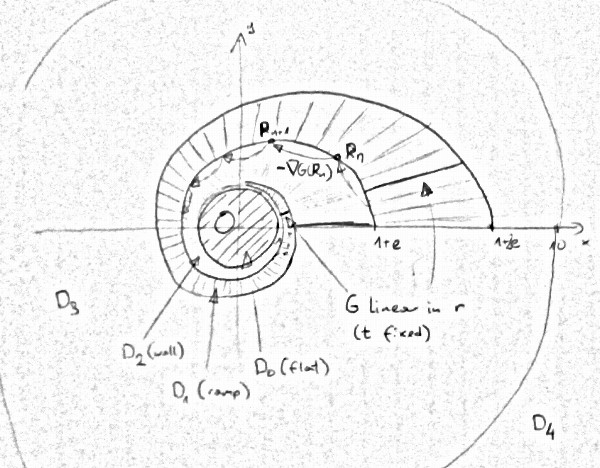 Our goal is to define $G$ in such a way that: (A) the second order derivatives of $G$ are small; (B) a particle placed on the ramp and following the recurrence equation $P_{n+1} = P_n - \nabla G(P_n)$ stays on the ramp forever.

Step 5. We need to extend $G$ to the circus $D_3$. Since this is a nice domain, and we have already defined $G$ elsewhere so that it has second order derivtives bounded by a constant times $c$, we can define $G$ in $D_3$ in such a way that the bound on the second order derivatives remains the same (possibly with a larger constant).

I am still not satisfied with the above description (and the quality of the image). If you are able to simplify it, feel free to edit this answer.

Not the answer you're looking for? Browse other questions tagged fa.functional-analysis real-analysis or ask your own question.

2
Sufficient conditions to the existence of a weakly convergent subsequence from a Cauchy sequence in a (merely) normed space
3
existence of a minimum for a convex functional on a non-reflexive space
5
Convergence in energy of bounded (semi)subharmonic functions
6
About weak convergence of probability measure
2
Convergence of sequence of images of Schur multipliers
1
The continuous convergence given the a.e. convergence
0
Application of uniform boundedness principle
Question feed