For which Functions is the (generalized) Riemann hypothesis known?

To be precise, we say that a meromorphic function on $\mathbb C$ satisfies the generalized Riemann hyporthesis (genRH), if all of its poles and zeroes lie in the union of a finite number of vertical lines $c+i\mathbb R$ and the real line. Are there any known examples, other than those in [1], or those derived from Deligne's work, for which the genRH has been proven? Of particular interest would be a function which can be written as a Dirichlet series for $\Re(s)>>0$.

Not an answer, but an extended comment on the ambiguity in the OP's question. Resolving that ambiguity makes the 'Riemann Hypothesis' aspect less interesting than it first appears.

Lagarias and Suzuki recount the history and discuss several proofs that the zeros lie on a line. Here's a sketch of an idea they don't mention: $$ \mathbb Z_{2,\mathbb Q}(s)=0\Leftrightarrow \frac{\Lambda(2s)}{1-s}=\frac{\Lambda(2-2s)}{s}. $$ Stirling's formula tells you the magnitude of the Gamma factors on the two sides above, and with some work one should be able to show that off the critical line, these two functions can not have the same magnitude. The zeta function can't cause too much trouble because it's evaluated at $2s$, so we're in the region of absolute convergence of the underlying Dirichlet series.

Once we know the zeros are on the critical line, the next question is statistics of the spacing between them. Upon renormalizing so the average gap is $1$, zeros of many number theoretic $L$-functions are conjectured to have the same statistics as eigenvalues of random unitary matrices, the so-called GUE distribution. Partial results in this direction were proved by Montgomery for $\zeta(s)$, and impressive numerical evidence was obtained by Odlyzko. And, by the work of Katz and Sarnak, this is a theorem in the function field case, just as the Riemann Hypothesis is.

The distribution of the zeros of $\mathbb Z_{2,\mathbb Q}(s)$ is very different. This is worked out by Lagarias for a slightly different function in "Zero Spacing Distributions for Differenced $L$-Functions"; this case is very much the same.

With $s=1/2+it$, the two terms which make up the function are complex conjugates. Their difference is $0$ if and only if the imaginary part of each is $0$, or the argument is $\pm\pi/2 \bmod \pi$. Stirling's formula for $\log(\Gamma(s))$ gives very precise information about the argument of that term. The argument of $\zeta(1+2it)$ again can be controlled, since Titchmarsh (5.17.4) gives $$ \frac{\zeta^\prime(1+it)}{\zeta(1+it)}=O\left(\frac{\log(t)}{\log\log(t)}\right), $$ the Fundamental Theorem of Calculus recovers the argument with the same bound. (NB the $\log\log(t)$ saving in the denominator will be crucial below.). One finds the number of zeros to height $T$ is the same as for $\Lambda(2s)$ up to an error of (I think) $O\left(\log(T)\right)$. And, the precise estimate given by Stirling's formula means that the zeros are very regular: the normalized gap between the zeros at height $T$ is $$ \delta=1+O\left(\frac{1}{\log\log(T)}\right) $$ 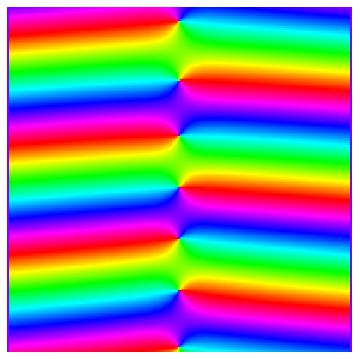 Up to the scale, the picture looks that same at any height.

See also (full disclosure: my student) Kim Klinger-Logan's preprint arXiv 1706.08552, which gives a very general (though not RH-proving) argument for all zeros of ... something... being on-the-line.

If you wanted functions that are neither too big nor too small then conjecturally all L-functions satisfy this, but there isn't a single function that you can prove this for, and for all we know no such function exists. There is an earlier mathoverflow question that defines this precisely and asks for a function satisfying the weaker property of having a "zero-free region", which is provided in the answer.