Has anything (other than what is in the obituary written by M. Noether) survived of Paul Gordan's defense of infinitesimals?

Question. Has anything other than what can be guessed from this obituary written by Max Noether survived of the 'defense' of infinitesimals that Paul Gordan gave in his doctoral disputation on March 1, 1862 in Berlin?

In Breslau Gordan got the topic of his dissertation; it arose from an article entitled "De linea geodetica", with which in August 1861 Gordan won a competition started by a prize question asked by the faculty. This doctoral dissertation that Gordan defended on March 1, 1862 in Berlin treated the geodetic line on the spheroid of the earth. Of the questions which Gordan defended at this disputation---in a Latin, of course, which was deemed not exactly classical by Kronecker---the following two may be mentioned; the first, because it is in line with Gordan's views both then and later in life; the second, for the opposite reason:

"The method of the Infinitely-Small is, I claim, no less precise than the method of limits."

"It is of greater interest to investigate the implicit properties of a function defined by a differential equation than to investigate in terms of which known functions it can be expressed."

Complex analysis attracted Gordan in autumn 1862 to go to Riemann [Riemann was employed at the university of Göttingen at the time]. He [...]

Update. I now took the time to read the whole of the obituary written by Noether ('op. cit.'). I here summarize all that seems not irrelevant to the present question (to cut a long story short: nothing strictly relevant to the question will follow; the last item will border on the off-topic; Noether is basically saying that Gordan did not use limits simply because he didn't like them, or just didn't care, and avoided them, not because he had a thought-out positive theory about infinitesimals; it seems more of a rather boring avoidance of second-order definitions and a preference for first-order definitions, than any positive theory about infinitesimals, making the chances of any appreciable answer to this question seem even slimmer than they already seem just from thinking about the question; I don't expect there to ever be much of an answer): 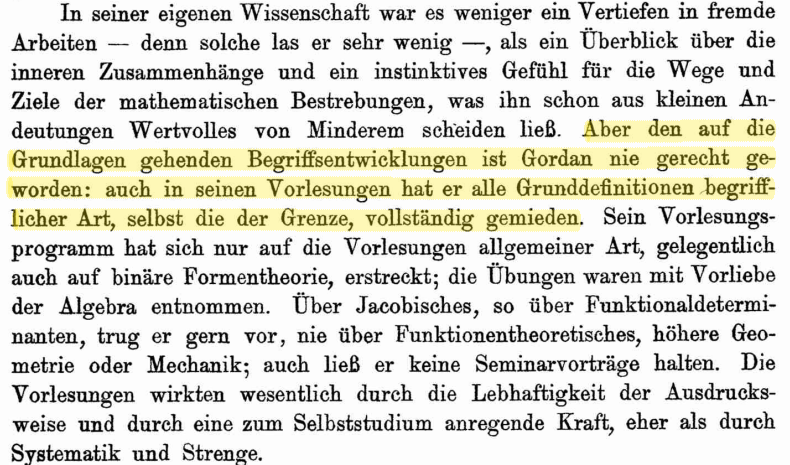 My attempt at a translation:

In his own field [Noether has written in the immediately preceding paragraph that Gordan liked to read German literature] it was not so much the perusal of the work of others than a 'big picture' of the inner connections and an instinctive feeling for the paths and goals of mathematical endeavours which enabled him to distinguish the valuable from the inferior, and small hints were sufficient for this. However, Gordan never did justice to foundational conceptual developments: also, in his lectures he entirely avoided any basic definitions of a conceptual kind, even the definition of 'limit'. [emphasis added] His lectures extended only to mathematics of the common kind, occasionally also to the theory of binary forms; the exercises were preferably taken from algebra. He liked to lecture on the work of Jacobi [Gordan's doctoral advisor], e.g. on functional determinants, yet never about complex analysis, higher geometry or mechanics1; he also did not have anyone give seminar presentations. The lectures [of Gordan], essentially, had an effect rather due to his vivacious way of speaking, and due to a vigour which encouraged further independent study, than due to systematizing and rigor.

Part of the relevant [i.e.: relevant for the biographical parts of the obituary] data was taken from [Gordan's] dissertation (I of the bibliography at the end). For other bits of information I am indebted to R. Sturm, a fellow student of Gordan at Breslau, C.F. Geiser, one of the opponents at the Berlin disputation in 1862, J. Thomae, a fellow student at Göttingen, and A. Brill, a colleague at Gießen; furthermore, I am indebted to L. Schlesinger for information from files at Gießen. 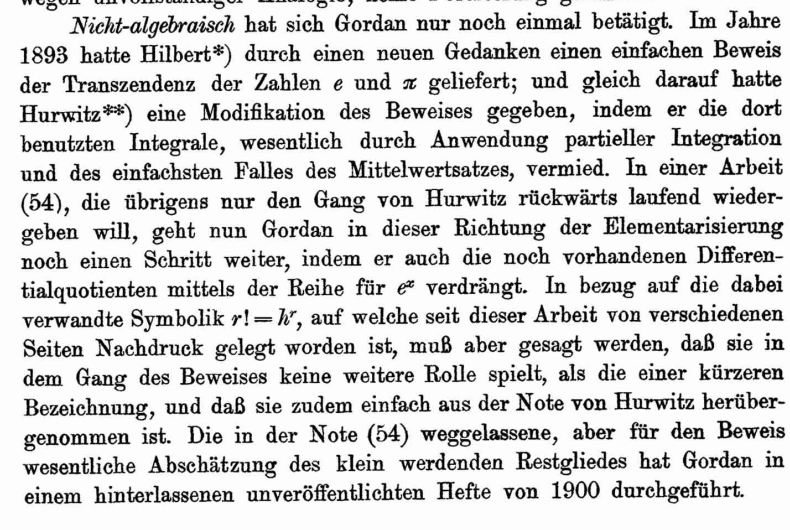 Only once did Gordan ever work on a non-algebraic topic: in 1893 Hilbert had, based on a new idea, given a simple proof of the transcendence of the numbers $e$ and $\pi$; and immediately afterwards Hurwitz had given a modification of the proof, by way of avoiding the integrals used by Hilbert, essentially by using integration-by-parts, and by the use of the simplest case of the intermediate-value-theorem. In an article (54), which by the way only had the aim of giving an exposition of Hurwitz's deduction, 'played backwards', Gordan took one more step in towards an elementary proof, by replacing also the still remaining differential quotients by use of the Taylor series of $e^x$. [emphasis added; by the way: what is nowadays the 'most' elementary proof that $\pi$ and $e$ are transcendental; the only proof I ever studied in detail used integrals, and, as such, limits] Regarding the $r!=h^r$ symbolism, which has been emphasized by various others after Gordan's paper, it must however be said that it does not play any further role in the proof than being a mere abbreviating notation, and that it moreover has simply been lifted from Hurwitz's note. The estimation of the vanishing remainder term, an estimate which is essential for the proof and was left out of the note (54), has been carried out by Gordan in 1900 in an unpublished notebook in Gordan's Nachlass. 3 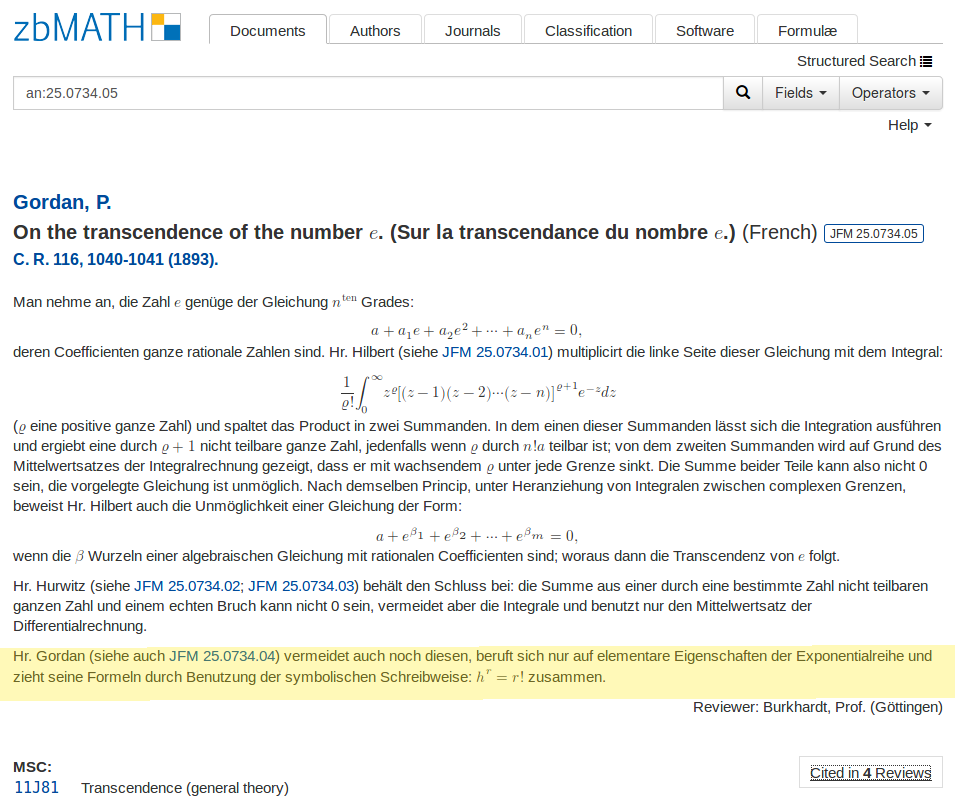 The blue link in the yellow lead to a review which is (displayed to me as) empty.

1To my way of thinking, this is all rather expected and unsurprising and in line with the usual reputation of Gordan: all the subjects Noether says Gordan avoided are second-order theories; in particular, in the mechanics of the time variational principles had an important role, and variational principles involve quantifier over sets of functions, i.e., second-order quantifiers; 19th century mechanics/variational principles/principles of least action, etc. to me seem recognizably non-algebraic. Also, one could now very much overinterpret and say something about whether and how much infinitesimals help in complex analysis, and that there, perhaps, limits are more necessary than in real analysis, and Gordan avoided complex analysis because of this. This, however, is evidently an overinterpretation.

2 And to me, it seems evident that if there is any hope of a mathematical answer, then this hope comes from the possibility that Gordan might later have written about infinitesimals/used them for something in published printed work. However, unfortunately, I think this is unlikely.

3 It might be an interesting separate historical problem to locate this "unpublished" notebook. Please note, though, that I don't think this relevant for the question: what Noether describes sounds like a rather ordinary estimate of a remainder term, presumably by inequalities; it does not sound like a use that Gordan made of infinitesimals, which don't yield effective estimates anyway, as far as I know. One should be clear that there is no sign that Gordan ever recognizably used infinitesimals, except for his thesis defense.

Paul Gordan's theses were published in De linea geodetica and digitised by Google, from which I reproduce the relevant page:

One can also learn from this publication that the opponents of Gordan at the March 1, 1862 Disputatio were Dr. Kretschmer, Mr. Geiser, and Mr. Rathke, presumably E.E. Kretschmer and C.F. Geiser. Gordan acknowledges as his teachers in mathematics the professors Kummer, Joachimstal, Richelot, Rosenhain, Schroeter, and Galle --- but it is unclear whether any of these were present at the defense ceremony.

Concerning the question "what was actually said at the defense"; at least in my University (Leiden) the practice through the centuries has been that the examination itself is not recorded, the secretary records only the outcome (pass/fail/cum laude etc.).

Not the answer you're looking for? Browse other questions tagged reference-request ho.history-overview nonstandard-analysis infinitesimals or ask your own question.

25
What has happened to Lang's Files and other political texts?
21
Was the early calculus inconsistent?
21
Felix Klein on mean value theorem and infinitesimals
3
Levi's book on Leibnizian calculus
14
Fermat's opponents
6
Did Bishop make those comments in his oral presentation?
6
Was Cauchy prescient?
36
Euler's Master's Thesis
54
Proofs of theorems that proved more or deeper results than what was first supposed or stated as the corresponding theorem
Question feed