I am reading this paper finiteness of representation dimension, on page 1012 there is a place I don't understand: 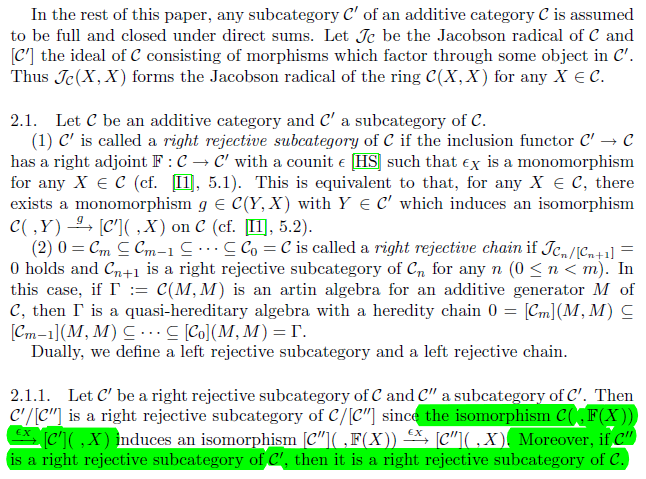 In Peter LeFanu Lumsdaine's answer, he answers most of the question, leaving only the question of why the composition of counits for a chain of right rejective subcategories should be mono.

In fact, this is not necessarily true, and is corrected in a later paper of the same author, Iyama, "Representation Dimension and Solomon Zeta Function". In 2.3.1 of that paper, and the footnote on the same page, he adds the condition that the counit of the adjunction for $\mathcal{C}'$ and $\mathcal{C}''$ is pointwise mono in $\mathcal{C}$, not just in $\mathcal{C}'$, which I think solves the problem that Peter identified. He also points out that this doesn't affect any of the applications in the first paper, where all the categories were full subcategories of a module category, and the relevant maps were even monic in the module category.

Here's an example to show that the correction is necessary.

Fix a field $k$, and let $\mathcal{C}$ be the category of representations of the quiver $\bullet\to\bullet$ over $k$, so an object is a diagram $U\stackrel{\alpha}{\longrightarrow}V$ of vector spaces.

However the fact that this surjection is not monic in $\mathcal{C}$ means that $\mathcal{C}''$ is not a right rejective subcategory of $\mathcal{C}$.

The following mostly answers your question, but not completely:

Possible conditions that would give this are:

Not the answer you're looking for? Browse other questions tagged rt.representation-theory ct.category-theory homological-algebra or ask your own question.