How to make a sandwich from just one piece of bread?

I don't know how to go about such questions. It's not exactly my area, so maybe it is stupid, but curiosity is winning.

So I have a piece of bread $P$ of a really non-regular shape (let's make it convex though), and I want to make a sandwich from it, i.e. two pieces of bread with some stuff between them. Obviously I have to cut my piece into two pieces. My knife is straight and I can only make one cut, otherwise the cooking will be too messy. In other words the two pieces that I obtain are the intersections $P^l_1$ and $P^l_2$ of $P$ with half-planes with respect to a certain line $l$.

Then, in order to make a sandwich I have to place $P_1$ above $P_2$ and put stuff in between. The most effective use of bread happens when these pieces are approximately aligned, i.e. only most $P_2$ is covered with $P_1$ and another way around. How to make it that way?

Let's state the questions in the mathematical language.

Q2: Is there an algorithm to construct an optimal, or almost optimal $l$ and $f$?

This won't be a complete answer to Q2, but something of a starting point, at least for all two-dimensional convex $P$. Assuming for simplicity that the area of $P$ is 1, $P$ contains a parallelogram of area at least $1/2$ (triangular $P$-s are extreme in this respect). This is quite easy to prove, and for polygonal $P$, an algorithm can be produced to find such a parallelogram. Cut $P$ along one of the parallelogram's diagonals, and put the two pieces together so that the two (congruent) halves of the parallelogram fit together. This way the common area between the pieces is at least $1/4$. I am sure this is not the best constant for the planar $P$, and by some elaboration on this technique a larger constant can be obtained. In fact, an old theorem of Kovner and Besicovitch states that every planar convex $P$ of area $1$ contains a centrally symmetric convex set of area at least $2/3$, which implies that the constant in question, for planar $P$, is at least $1/3$.

To this answer I would add narrower question, restricted to the special case when $P$ is triangular:

Is there a constant $c>1/3$ such that each triangle of area $1$ can be cut into two pieces, producing a sandwich measuring at least $c$ in the common area?

This already seems to be non-trivial.

Restricting to the case where $P$ is triangular, if the angles of the triangle are $A$, $B$, $C$ and you fold the triangle along the bisector to the angle $C$, then assuming wlog that $A<B$, you obtain an overlapping area whose ratio to that of the full triangle is:

Choosing to fold along the bisector of the angle represents a local maximum for the overlapping area, among all choices of folding lines that pass through the same vertex.

You can then choose which vertex to bisect, of the three, as the one that yields the largest value of $r(A,B)$:

A lower bound for $r_{max}$ occurs when two of the vertex choices give the same result, and this lower bound gets smaller in the limit that the two angles $A, B$ are both small. Set $B = f A$ and express the equality of two solutions with the function:

To first order in $A$, this becomes:

This becomes zero (i.e. the two ratios for the different choice of vertex match) when:

So $B/A$ is equal to the golden ratio. Inserting this value for $f$ back into either area ratio gives a lower bound of:

A slight improvement can be achieved by allowing the additional possibility of folding along the perpendicular bisector to any of the sides. If the two angles at the endpoints of the side whose bisector is used are $A$ and $B$ and $A \lt B$, then the area ratio is:

An approach that included only these perpendicular bisectors would do terribly, but adding three more possibilities due to $r_p$ to the original three used to calculate $r_{max}$ yields a slight improvement.

In this case, the lower bound is found by setting:

To first order in $A$, this becomes:

This is zero when:

and the ratios here are:

When the folding line is displaced from the midpoint of the side to lie further away from the smaller of the angles incident on that side, the portion of the original triangle on the small-angle side of the folding line will, after folding, have a non-overlapping piece that needs to be excised, leading to a quadrilateral overlapping region. But the increasing base and altitude of the triangle more than compensate for the excision, up until a scaled position for the folding line of:

where as usual we assume $A\lt B$, and $\alpha$ ranges from $0$ to $1$ as the point where the folding line crosses the sides moves from angle $A$ to angle $B$. At $\alpha(A,B)$, the ratio for the overlapping area has its peak of:

In principle, we might worry that this optimal folding line lies past the vertex of the original triangle, complicating the geometry, but that turns out to be impossible. So one of these displaced-perpendicular folding lines can be used whenever the $r_{dp}$ for a side gives a better result than all the angle-bisectors.

The new lower bound can be found by the same kind of methods used previously, in the limit where angles $A$ and $B$ both get smaller but maintain a fixed ratio, $B = f A$. Using $r_{dp}$ rather than $r_p$ in the previous calculations, we get:

and a new lower bound of: 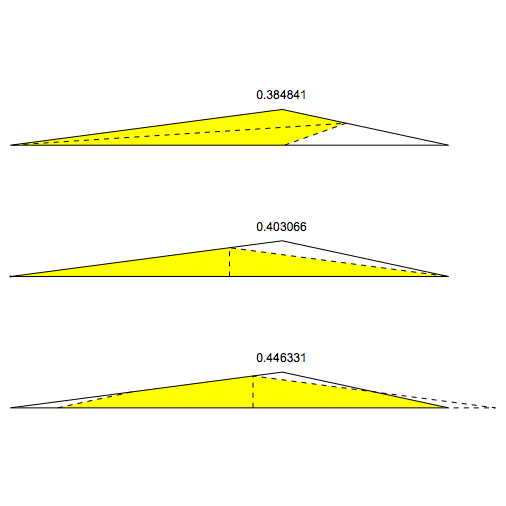 Not the answer you're looking for? Browse other questions tagged convex-geometry convexity convex-optimization or ask your own question.

3
What is the shape of the convex $n$ -gon which gives the maximum of a function?
2
Choosing the weights of a Voronoi diagram -- is this function always the gradient of another function?
5
How does one go from convexity to submodularity?
13
Minimize sum of $\ell_2$ norm and linear combination, on simplex
5
Cutting a convex body into two congruent pieces
2
Existence of preferred direction for a random vector with arbitrary distribution on sphere, under a condition on its covariance matrix
Question feed