What is the shape of the convex $n$ -gon which gives the maximum of a function?

I've already proved that $B_5$ reaches the maximum only if the pentagon is a regular pentagon, but I don't have any good idea for $n\ge6$. I need your help.

Could you tell me how to solve this problem? What is the shape of the $n$-gon which gives the maximum of a function?

I think I can prove that $A_5$ reaches the max only if the pentagon is a regular pentagon. Please judge whether my proof is correct or not. I use an transforming operation through which the value of $A_5$ doesn't change or increases. Here is the operation which consists of the following steps.

$W$ is min only if the pentagon is a regular pentagon, so the proof is completed.

If we can use this transforming operation for $n$-gon, it's sufficient to solve B in order to solve the problem A. This is why I'm asking B. My aim is to solve A. If you have a better idea to solve A, you don't need to solve B. Please teach me how to solve A. 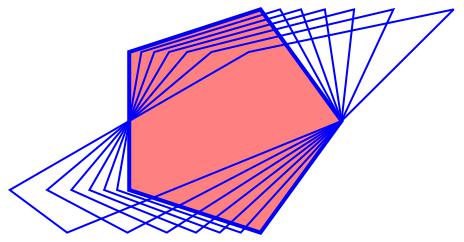 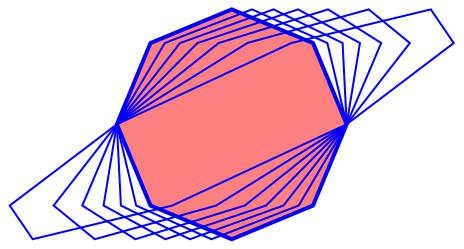 9
What is the shape of the $n$-gon which gives the maximum of a function?

5
How to find overlap between two convex hulls, along with the overlap area
9
What is the shape of the $n$-gon which gives the maximum of a function?
17
Does the boundary of a convex body contain a regular planar pentagon?
11
What is the area of the biggest open convex set inside the unit square not containing k points?
10
Perimeter-halving center of a convex shape
16
Maximum area of the intersection of a parallelogram and a triangle
1
A generalization of Harcourt's theorem
4
Which convex pentagon gives least packing density?
Question feed