In $R^n$ (the real space) we have an open connected set $D$, such that $\partial D$ is triangulable. Can we prove the closure $\bar{D}$ is triangulable or any counterexample?

Furthermore, the $\partial D$ are piecewise algebraic in the question I am considering, I do not know whether this would be helpful for the above statement.

Thanks for any help.

In many categories, the answer is known to be yes, see

In fact, he proved all of $\mathbb{R}^3$ can be tetrahedralized compatible with $P$'s surface triangulation (with some tetrahedra having a vertex at $\infty$).

It is interesting that if you change "triangulable" to "hexahedral-able," and ask if the surface mesh can be extended compatibly to an interior mesh, the answer is unknown:

"No algorithm is known to construct hexahedral meshes compatible with an arbitrary given quadrilateral mesh, or even to determine when a compatible hex mesh exists, even for the simple examples shown in Figure 1" 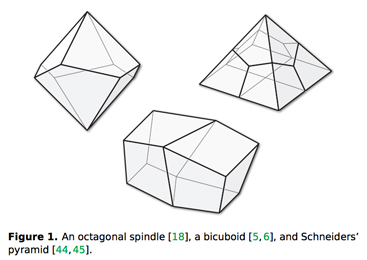 8
Embeddings and triangulations of real analytic varieties
27
Classification of surfaces and the TOP, DIFF and PL categories for manifolds
21
Does a *topological* manifold have an exhaustion by compact submanifolds with boundary?
0
Universal etale covering, reference request
5
Locally Closed Orbits in Real Algebraic Geometry
1
stable sheaves in characteristic $0$
11
The set of homotopy classes of maps between compact manifolds is countable
7
Any 3-manifold can be realized as the boundary of a 4-manifold
5
Picard group of connected linear algebraic group
Question feed