Consider the following game: Given $K_n$ the complete graph on $n$ vertices, two players take turns coloring its edges. Initially no edges are colored. At his turn a player can color a prevoiusly not colored edge blue or red. The goal is to avoid monochromatic $K_k$. The first player who completes a monochromatic $K_k$ loses. If $n$ is large enough the Ramsey theorem ensures that there can be no draw. Therefore someone has a winning strategy. My question is that:

Is there any pair $(n,k)$ such that $n<R(k,k)$ but in the corresponding game one of the players has a winning strategy?

This game can be described as an impartial edge colouring game on $K_n$ where creating a monochrome $K_k$ is not allowed, and the last player to make a move wins (normal play). Hence, it is equivalent to a nimber. I use the terms $P$-position and $N$-position sporadically to mean "a game state where the previous (resp. next) player has a winning strategy". I didn't calculate Sprague-Grundy values, but that is certainly doable. The game on $K_5$ with $K_3$ disallowed is a first player win. The game tree is small enough that I can give a complete strategy. I've also tried my best to make it RG/BY-colourblind readable by using dotted lines for anything that wasn't red or blue, but do let me know if it still causes problems and I could do something different.

As Flo Pfender mentioned, the first player should strive to create a monochromatic $C_4$ plus one edge, which I will call $C_4^+$

The dotted purple edge can be coloured red or blue, but the rest must be coloured blue, and the loser will be the player who makes the last move. Hence, the first player (us) will win if we can construct $C_4^+$ at any time. This will be the main goal of the strategy.

Beginning with one red edge, there are four non-isomorphic moves the second player can make:

The first two cases will elicit a similar response from us, which is to complete the triangle.

The second player can make 6 distinct moves from here, 3 with each colour.

For the first picture, we should complete the red $C_4$, and will ensure victory by adding one red line (from at least three possible) next turn. The latter two pictures can be combined into one by adding a red line, then on the next turn, our hero can create a $C_4^+$ by colouring either of the dotted green lines red. Since no other red edges can be drawn, they can only be blocked by colouring them blue, and with two possibilities, we will always have one available.

The three pictures with blue lines added are as follows:

In the first two, we should complete to the picture below on the left, while in the third, we should play to the picture below on the right. Both of these positions have one triangle and a monotone length $2$ path, which is the same colour as the single triangle edge. These are $P$-positions (which is us) as we will show, and they come up again later in the final case, so I will refer to them as $T$ (for triangle) drawings.

For the first, if our opponent plays any blue edge, we can complete it to a blue $C_4^+$:

For the first two, create a red $C_4$. It has two possible positions for an additional edge, so it can always be completed to a $C_4^+$. In the third, create a blue $C_4$, again with two places for a future blue edge. For the last two, colour a blue edge from the vertex with three red edges: 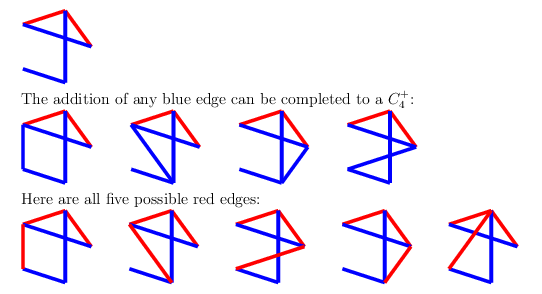 For the first four, make a red $C_4$, which can be completed to $C_4^+$ next turn, since there are at least two possibilities for the final edge. For the last one, draw a blue edge as shown - then the blue $C_4^+$ cannot be blocked.

In the third case of the early game, our opponent has played the same colour as us on a non-adjacent edge. We should make it a monochrome path.

If they do not play a blue line to block the $C_4$, then we can play there, and we will have at least two options available for the final red line necessary for $C_4^+$. If they do play there, we will follow up with a red line to the untouched vertex (on the left below, which I will later refer to as a $Q$ drawing) - our opponent will be forced to block the $C_4^+$ again with a blue edge, which leaves a dotted black edge that can't be coloured safely, and three other edges which can only be coloured blue (on the right).

Each of the three safe edges to be coloured blue will not complete a blue triangle, either because the triangle would contain the black edge, or it contains an edge which is already red, so those are $3$ free moves. Thus, the second player will lose by having to play last.

Finally, if your opponent chooses the opposite colour on their first turn, and doesn't play adjacent to you, you should connect the edges.

From here they have $13$ moves that continue the game, but fortunately we have covered most of them already. Three of the moves create a triangle plus one edge, which we know is an $N$-position from the first two cases.

The four possible moves from the bottom vertex to the two closest vertices can be extended to a $T$ drawing, again from the first section. 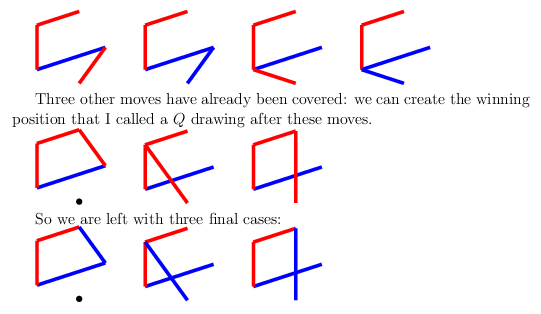 These should be played as follows, and note that the first two are now equivalent:

Of the four possible edges to colour red in the first image, three can be completed to $C_4^+$, and the last is the second player's response to $Q$, so the first player will win all of these.

Of the four possible blue edges, two can be completed to $C_4$ with two options for another blue edge. The other two should be followed by the dotted blue move, which makes them the same, and leaves two edges that can be given any colour, and one which cannot be safely coloured.

The three allowable blue edges can each be completed to $C_4^+$, while any of the four allowable red edges create a $T$ drawing plus one edge. Since we know that the $T$ drawing (triangle and monochrome 2-path) is a $P$-position, adding one edge makes it an $N$-position, so the first player wins.

Not the answer you're looking for? Browse other questions tagged co.combinatorics graph-theory game-theory combinatorial-game-theory or ask your own question.