Perimeter-halving center of a convex shape

Q1. Does the perimeter-halving center of $P$ coincide with the centroid of $P$? Or is it located at some other natural center? 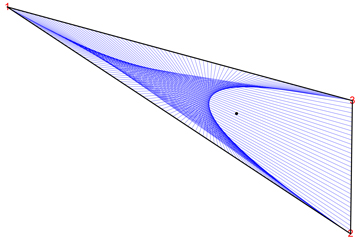 Q2. Which shapes achieve the extremes of $\delta$?

Clearly any centrally symmetric shape achieves $\delta=0$. Does any other shape realize $\delta=0$? Which shapes have the worst (largest) $\delta$?

And just out of curiosity, I would be interested to learn what are the elegant spirograph/astroid-like envelope curves visible in the figures.

Added. David Eppstein's center for an equilateral triangle, as detailed by Wolfgang. 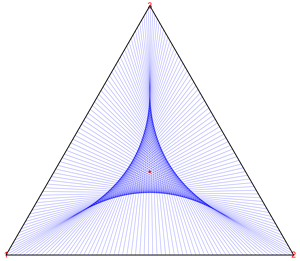 As can be seen from the construction of the dual parabola as described here it is clear, that the astroid like curves inside convex polygons are actually composed of pieces of parabolas.

A simple proof for the claimed parabolic segments is, that the perimeter-halfings, whenever they intersect a pair of edges in inner points, resemble the construction of a quadratic Beziér curve.
To see that, simply elongate the two intersected edges to their intersection point and to a length, that equals half the perimeter of the convex polygon. The end points of the elongated edges are then the control points of a quadratic Beziér curve, along with the fact that as one endpoint of a perimeter-halfing slides towards the common intersection, the other end slides away from the intersection by the same distance, which is the same as the convex combination to obtain intermediate points on the control polygon of a Beziér curve that define the tanget to the parabolic arc. These quadratic Beziér curves also appear in String Art

In case of a regular triangle the curve collapses to a point.

The answer to Q1 appears to be no.

In your figures above there is a central triangular "cusp" area (but I think in a regular pentagon the cusp would not be triangular). When this is the case, inscribe a circle within the cusp, tangent to its three sides. The perimeter-halving center must be at least as far from some halving chord as the radius of this circle, just to touch the three halving chords to which it is tangent. On the other hand, the center of this circle achieves this distance, because it is exactly this distance from the three tangent chords and closer to all other chords (as they all cross the inscribed circle. Therefore, it gives the location of the perimeter-halvings center. As can be seen in your example triangle, it can be far from the centroid.

I am old enough that I took a separate course in analytical geometry before taking a Calculus course. One of the lovely theorems I learned in analytical geometry was that the locus of points creating a curve where the tangent lines to the curve cut off a fixed area from the coordinate axes (which can be at right angles or a more general angle) is a hyperbola. There is a similar theorem for perimeter which gives the locus curve to be a parabola. For a triangle or more general polygon one can look for the points where several area or perimeter bisectors go through a point. This has some relation to the notion of a measure of symmetry for a convex set. See: