An "inchworm-like" random walk on an integer interval

I then proceed to do the following:

For each of some arbitrary number of discrete time steps, I select one of the $k$ stones with uniform probability. I then lift the stone up and uniformly select an unoccupied site to place it back down which satisfies the dual criterion of: (a) being at most a distance $d$ from both of the stone's nearest neighbors, and (b) not disturbing the initial ordering of the stones along the integer interval (note that the stone's original position can be reselected). If $d=1$, no stone can be moved from its original position and the center of mass of the stones/system, $C_m$, will be immobile. However, if $d=2$, starting from the state $(-2,-1,0,1,2)$, the center of mass will move to either the right or left with some per step probability of $\frac{1}{k}$ (until we leave this initial system state).

My question is - provided some number of stones $k$, and some "leashing distance" $d$, how can we characterize the dynamics of the random walk taken by the above system's center of mass, $C_m$? What is the average step time and size, and, in terms of Euclidean distance, what mean square displacement can we expect after some number of steps, $T$?

Update (due to a suggestion by Douglas Zare) - The $k$ stones must be kept in order, and the distance between a stone and its two nearest-neighbors along the interval (or one nearest-neighbor if the stone occupies the left-most or right-most position of the chain) can be at most $d$.

This is a particular case of random walks with internal degrees of freedom (aka semi-Markov random walks or covering Markov chains). In the case when the translation group is just $\mathbb Z$ (like in this question) this is a Markov chain on $\mathbb Z \times X$ with translation invariant transition probabilities. In the "inchworm" situation one can take for $X$ the (finite) set of all configurations in which the leftmost stone is at the point $0\in \mathbb Z$. Then states of the worm are described by the pairs $(n,\phi)\in \mathbb Z\times X$, where $n$ is the position of the leftmost stone, and $\phi$ is the shifted configuration. The center of masses will then be within uniformly bounded distance from $n$. It is obvious that in these coordinates the transition probabilities of the chain describing worm's motion are translation invariant, so that this is a random walk with internal degrees of freedom on $\mathbb Z$.

The paper "Random walks with internal degrees of freedom. I. Local limit theorems" of Krámli and Szász (MR0699788) describes the asymptotic behaviour of such chains in terms of the properties of the quotient chain on $X$. In particular, there is an explicit formula for the non-zero variance of the displacement in terms of the stationary distribution on $X$ (which in our case should also be quite explicit - it's a nice exercise). 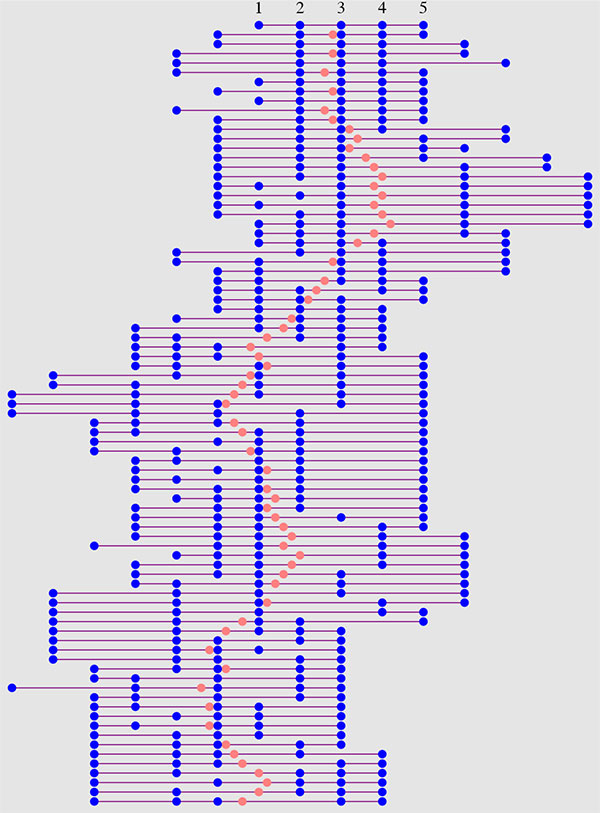 It appears the center of mass performs a scaled random walk, scaled as a function of $k$ and $d$. Perhaps scaled by about $(d/2)/k$...?

I wanted this to be a comment since I don't know enough probability to finish the argument but it was a bit too long:

You can transform the positions of the stones into the following data - one number telling us the position of the center of mass of the inchworm, and a $(k-1)$-tuple of positive integers $\vec{a}=(a_1,\dots,a_{k-1})$ living in the hypercube $C$ defined by the inequalities $1\leq a_i\leq d$. The components of $\vec{a}$ are the distances between each pair of neighboring stones and I think of $C$ as the space of configurations of the inchworm.

Each step of your process is a trial move of some random stone either left or right. This corresponds to some trial move of $\vec{a}$, where some component(s) will be incremented or decremented by one. I tried to define $C$ so that your conditions (a) and (b) precisely correspond to $\vec{a}$ staying within a "configuration space" $C$ of the body of the inchworm. Provided $\vec{a}$ does not attempt to leave $C$, the center of mass of the inchworm will move a distance of $1/k$ either left or right.

Thus the problem boils down to understanding how $\vec{a}$ moves around $C$ and in particular how often it attempts to leave $C$. In particular a good bound on this event will tell us how often the center of mass pauses from its default simple random walk behavior.

You can construct a graph $G_C$ whose vertices are the points of $C$ and whose edges are precisely the possible transitions of the body of the inchworm from one state to another. Note that the vertices at the boundary of $C$ have loops attached which correspond to trial moves that fail. In particular the degree of every vertex is $2k$. The change of the body shape of the inchworm is a simple random walk on $G_C$ and I think you can show from this that every shape is visited equally often.

I wrote some Mathematica code for playing around with this model. It's at the end of this answer.

Here is a picture of a run for the case $k=3$, $d=2$ as described in Douglas Zare's comment above. The different colors correspond to different stones. 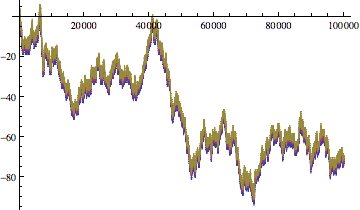 While it is true that in the first step the center of mass will tend to move left there isn't any particular propensity for the worm to move left or right in the long run. 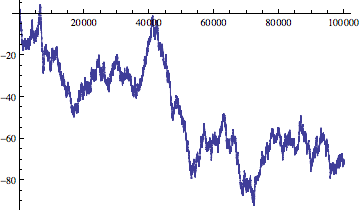 The configuration space for a worm with $k=3$ is a $d$ by $d$ square. Here's a histogram of the time spent at each point from a run of $10^5$ steps with $k=3$ and $d=10$. It seems that the inchworm spends an equal amount of time in each possible configuration. This should follow from basic results on random walks on finite graphs but I don't know them. 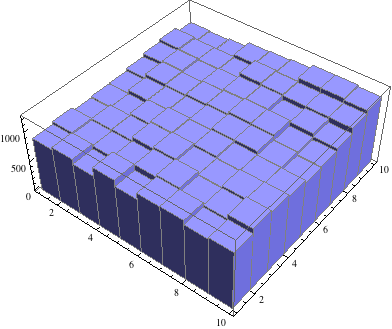 It seems that the amount of time that the center of mass is "stuck" because $\vec{a}$ attempts to leave $C$ is proportional to $1/d$ which intuitively seems to come from dividing the area of $C$ by its volume. An analysis of the walk on $G_C$ should make this more clear...

Not the answer you're looking for? Browse other questions tagged pr.probability stochastic-processes random-walks or ask your own question.

3
Probability that a randomly filled Go board has a set of white stones connected through their von Neumann neighborhoods
8
A discrete random walk that avoids previously visited vertices for an exponentially distributed time interval
0
Estimates for the mixing time of a Markov Chain with biased initiation
3
"Trapping" of discs after random sequential adsorption
5
Keeping time by randomly drifting a $q$-ary string
18
Random Walk on $\mathbb{R}$ with Uniformly Distributed Steps and "Reflective" Boundary at Origin
2
WIll a proliferating 3D random walk a.s. revisit the origin?
Question feed