The most natural answer to this question is countable choice, or $\kappa$-choice for cardinals $\kappa$.

Therefore, I wonder, are there other (i.e. not equivalent to any of the above) examples of results with this property? What about which are strictly stronger or weaker than all the cardinal-choice axioms (but not equivalent to ZF or ZFC)? In particular, I am interested in results occurring naturally in algebra, geometry, etc. And whether or not there are, is there a deeper reason why results that use choice tend to imply it?

A diagram is worth a thousand words.

Taken from the beautiful book by Herrlich, Axiom of choice, Lecture Notes in Mathematics 1876, Springer 2006. Most of the implications are one-way implications, i.e., known to be not reversible: 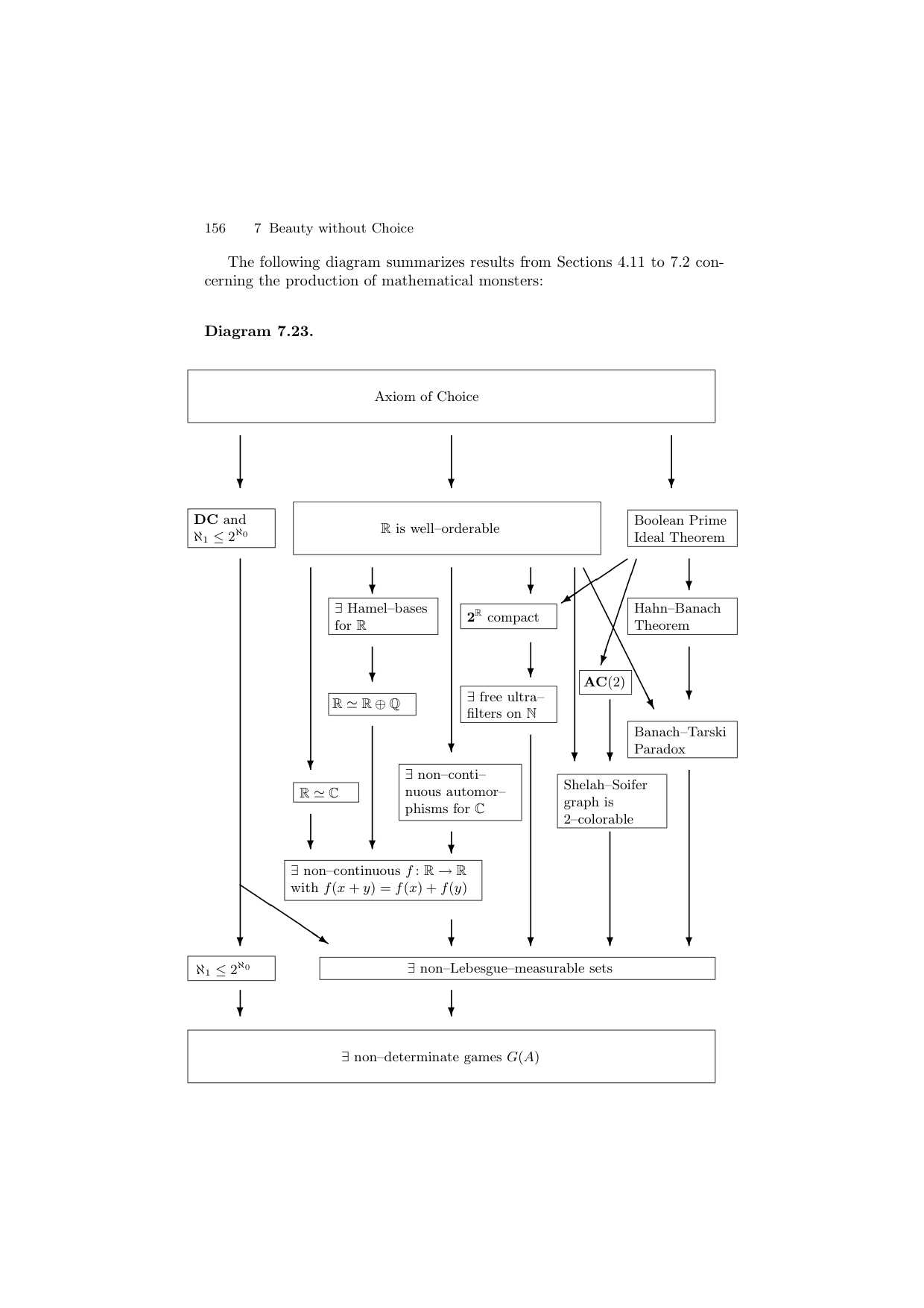 There's a huge amount of information about statements intermediate between "provable in ZF alone" and "provably equivalent to AC" in the book "Consequences of the Axiom of Choice" by Paul Howard and Jean Rubin.

Since you asked specifically about statements stronger than all the cardinal-choice axioms (I assume you mean well-ordered cardinals, i.e., alephs), there's the conjunction of all of them, the axiom of well-ordered choice: "Any well-orderable family of nonempty sets has a choice function." A clever result of Jensen says that this implies dependent choice, which does not follow from $\kappa$-indexed choice for any single $\kappa$.

Generalizing a bit from ZF with a classical (Boolean) meta-logic: in constructive set theory, there are quite a few choice-principles that are studied in addition to those mentioned earlier, for example the presentation axiom, the axiom of multiple choice, the axiom of weakly initial set of covers, the axiom of small violations of choice, and others. These principles are considerably weaker than AC (even if we assume classical logic).

There is a famous result in topos theory called Diaconescu's theorem which states that if AC is satisfied in a topos, then so is the law of the excluded middle (so that excluded middle can itself be considered a weak choice principle; see here). So full AC is (unsurprisingly) generally considered unacceptable to those who wish to work in intuitionist or constructive settings; on the other hand, the choice principles mentioned above are often felt to be acceptable to constructivists. Toby Bartels, who is sometimes seen here at MO, is an expert on these matters.

An interesting dividing line, different from the ones you see in the cardinal choice axioms, is connected to the Tychonoff theorem saying that products of compact spaces are compact. The general Tychonoff theorem implies full choice, but when restricted to Hausdorff spaces, then the Tychonoff theorem is equivalent to the Boolean prime ideal theorem which in turn is equivalent to the existence of maximal ideals in commutative unitary rings. The Boolean prime ideal theorem says that every ideal in a Boolean algebra is contained in a maximal ideal.

However, the axiom "Every Dedekind-finite set is finite" is strictly weaker than the axiom of countable choice.

In the spirit of the above, there are several other propositions which are provable from the axiom of countable choice, and are consistent with the assumption "There exists an infinite Dedekind-finite" (but do not imply it), for example "Every infinite set can be split into two disjoint infinite sets".

Generally speaking, there are several "orthogonal" choice principles (and their obvious extensions, etc.) for example axiom of choice for families of size $\kappa$ is generally independent from choice principles like the Boolean Prime Ideal Theorem (and its consequences).

The generalized Kinna-Wagner principle, while related to the Boolean Prime Ideal theorem can be shown to hold even when BPIT fails badly (e.g. there exists an amorphous set which cannot be linearly ordered). This principle is also a good example for something independent from the "choice-related" choice principles (again, if there is an amorphous set countable choice fails badly).

Here's one that I think a lot of people don't realize: the existence of free algebras for all (possibly infinitary) algebraic theories. In his paper "Words, free algebras, and coequalizers" Andreas Blass proved that (assuming the consistency of a proper class of compact cardinals) it is impossible to prove this in ZF. (I don't know for sure that it is strictly weaker than AC, but it seems to me extremely unlikely to be equivalent to AC.) I think this is especially interesting because it doesn't look like any sort of choice principle itself.

Eric Schecter's Handbook of Analysis and Its Foundations is an excellent source for questions like this in analysis. He has some information on the subject on his home page.

One example he gives that's not equivalent to countable choice or the Boolean prime ideal theorem is the Hahn-Banach Theorem.

The Banach-Tarski theorem is a famous example of a result following from a weaker-than-ZFC extension of ZF. The Wikipedia article about it says more. I don't know if I'd say it occurs "naturally in algebra, geometry, etc".

Not the answer you're looking for? Browse other questions tagged lo.logic axiom-of-choice set-theory axioms or ask your own question.

10
Completeness of the club filter without AC
9
On a weak choice principle
27
What are the known implications of "There exists a Reinhardt cardinal" in the theory "ZF + j"?
20
What sort of large cardinal can $\aleph_1$ be without the axiom of choice?
5
On successive regular cardinals with no ladders
2
Consistency of: "The continuum function is injective, and for all infinite cardinals $\kappa$ we have that $2^\kappa$ is weakly inaccessible."
4
Categorical set theories that are not extensions of second-order ZFC
5
What are examples of non-equivalent virtualizations of a large cardinal?
10
Relation between the Axiom of Choice and a the existence of a hyperplane not containing a vector
Question feed