Fitting a mesh to a density function

Suppose I have a probability density function defined on a region in the plane (in my case, the pdf is of the form $f(x) = \alpha\|x\|^{-\beta}$, and the region is the unit disk). For large $N$, is it possible to place $N$ points $X_1,\dots,X_N$ in the region so that the points $X_i$ are distributed according to $f(x)$, and also form a mesh of (approximately) equilateral triangles? This is clearly trivial when $f(x)$ is uniform (just put the $X_i$ in a uniform triangular lattice).

For the non-uniform case, obviously some triangles will be larger than others, but I want each individual triangle to be approximately equilateral (e.g. maximum side length and minimum side length are within 1% of each other, etc.). One possibility for the non-uniform case would be to sample $N$ points independently at random from $f(x)$ and then take their Delaunay triangulation, but I don't think there is a guarantee that the triangles will be roughly equilateral (i.e. some will be long and skinny) as $N$ becomes large.

The picture below is along these lines, if you ignore the big ugly hole in the center; each triangle is roughly equilateral, but points are not uniformly distributed. 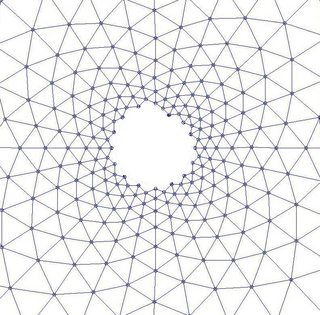 Here is one possible interpretation of your question.

Assume a probability density function $f$ is given. Is there a sequence of triangulations $T_n$ with $\varepsilon_n$-equilateral triangles such that counting probability measure on nodes converges to $f$ and $\varepsilon_n\to 0$ as $n\to\infty$.

There is an analogy in mechanics that might help: think of the nodes of the mesh as being connected by springs, which have tension proportional to something meaningful, e.g. the integral of $f(x)$ along the segment $[X_i,X_j]$. Then, if you let it stabilize, you will get a mesh with nodes distributed roughly according to $f$; if you pre-process $f$ to make is smooth enough so that it does not change much on every initial triangle, you should end up with roughly equilateral triangles, too.

Not the answer you're looking for? Browse other questions tagged pr.probability mg.metric-geometry geometric-probability euclidean-lattices or ask your own question.

5
Is there a 3d equivalent of this picture?

7
How to compute the average distance till intersection within a triangle in $\mathbb{R}^2$?
2
The consequence of overlap sharing for the length-distribution of rods randomly placed on a line
13
Acute triangulation
2
mean length of the non-crossing graphs on n points
5
Does this iterated Delaunay triangulation process always "explode"?
2
Monotonicity for the side lengths of stars inscribed in regular polygons
3
Minimum weight triangulation of lattice points in a circle
5
To find the Largest Regular n-gon contained in a given convex region
Question feed