Isometric embedding a convex cap to render its boundary planar

I would like to know if there is a polyhedral analog to this beautiful theorem of Hong:

Theorem 11.0.1. Any smooth positive disk $(\bar{D},g)$ with a positive geodesic curvature along $\partial D$ admits a smooth isometric embedding in $\mathbb{R}^3$ that maps $\partial D$ to a planar curve. Moreover, the embedding is unique within rigid motions.

This is proved in the book by Qing Han and Jia-Xing Hong, Isometric Embedding of Riemannian Manifolds in Euclidean Spaces, American Mathematical Society Monograph, Volume 130, 2006, p.225. 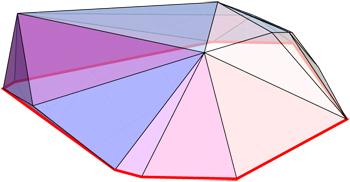 Alexandrov's book Convex Polyhedra includes an article in the Appendix written by L.A. Shor "On Flexibility of Convex Polyhedra with Boundary," which describes (rather complex) conditions under which flexing can occur, but does not seem to address flexing to achieve planarity of $\partial C$. It appears that Alexandrov's and Shor's results imply that it cannot always be possible, because (for example) if $\partial C$ contains no vertices of $C$, then it must be rigid (but not necessarily planar).

But perhaps there are conditions under which some polyhedral analog of Hong's theorem holds? Thanks for pointers!

Addendum. My concentration on the conditions for "flexing" above was misplaced, as Sergei Ivanov's answer demonstrates: the analog isometrically embeds a convex cap $C$ with $\partial C$ planar, but not by hinging $C$'s faces as rigid plates, but rather through an embedding which in general alters the facial structure of $C$ while maintaining isometry.

Yes the polyhedral analog is true. Just consider the doubling of $C$, i.e., attach an isometric copy $C'$ of $C$ along the boundary, and apply Alexandrov's embedding theorem to the doubling. The common boundary of $C$ and $C'$ will go to a plane automatically.

The uniqueness also follows from the uniqueness part of Alexandrov's theorem as long as you require that the image is a convex half-polyhedron.

The usual warning attached to Alexandrov's embeddings applies here: you get an isometric embedding of the intrinsic metric, but its facial structure may differ from the original one.

Not the answer you're looking for? Browse other questions tagged dg.differential-geometry mg.metric-geometry convex-polytopes convex-geometry polyhedra or ask your own question.