There are many known results proving convergence of finite element method for elliptic problems under certain assumptions on underlying mesh [e.g., Braess,2007]. Which of these common assumptions are indeed necessary? Can anyone recommend any exact reference to an example of a sequence of triangulations on which the finite element solutions do NOT converge to the real solution?

Which of the assumptions (1) and (2) cannot be dropped here? What are counterexamples? I am mostly interested in uniform ($L_\infty$) convergence of values at the vertices but I would be also grateful for counterexamples for other norms.

The maximum and minimum angle conditions for meshes are needed to prove various bounds on the error of interpolation. In other words, the solution of the PDE is a secondary concern; what goes wrong is that one cannot control the interpolation error.

There's a famous paper by Babuska and Aziz in a 1976 SIAM J. Numerical Analysis v. 13, no. 2, On the angle condition in the finite element method. This also has a nice counter example showing why the interpolation error cannot be bounded unless the maximum angle is bounded away from $\pi$.

Please see On angle conditions in the ﬁnite element method for a survey and discussion of these ideas. 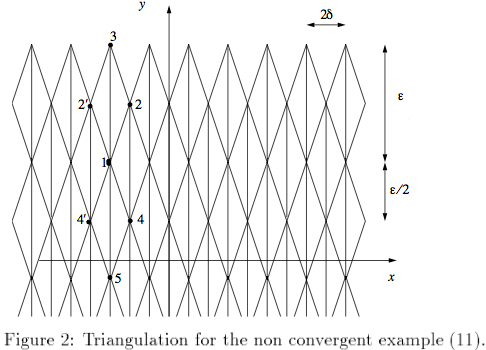 A related example even though not precisely the model question you suggested, is the case when there is excellent convergence, but not to a physical solution.

It is given in some of Douglas Arnold's slides page 8, and comes from Boffi Brezzi and Gastaldi. The example is a criss-cross mesh on a square of size $\pi$, where the eigenvalues of the Maxwell operator are computed.

It is elementary to sove it by hand, and find that they are the sum of squares of integers: 1,1,2,3,4,4,5,5,8,etc.. The finite element (P1 for example) solution converges very smoothy, and find that the 9th eigenvalue is 6, with very high accuracy!

In this case, the inf-sup and ellipticity conditions are both satisfied, and the mesh is standard.

This is worse than non convergence in practice: numerical evidence in this case is very misleading.

The following is not strictly a counterexample to convergence but rather a counter example for convergence in general.

If the mesh is refinement in a uniform manner, then the finite element approximations converge in the energy norm with rate $1/2$ (all convergence rates in the mesh size), which is optimal as you can get with a gradient $\nabla u \in W^{1/2}(U)$. But the convergence in the $L^2$ norm enjoys only the rate $1$, even though the best approximation in the finite element space converges with order $3/2$.

So the convergence is suboptimal whenever you have reentrant corners, and the worse the sharper the reentrant corner. This was one motivation for the purely analytical research on regularity over polyhedral domains.

Not the answer you're looking for? Browse other questions tagged na.numerical-analysis ap.analysis-of-pdes elliptic-pde counterexamples or ask your own question.