Who first noticed the duality for finite groups?

A.A.Kirillov in section 12.3 of his "Elements of the Theory of Representations" writes that the first "symmetric" duality theory for non-commutative groups was the theory for finite groups. In short what he writes can be explained as follows: the operation $G\mapsto{\mathbb C}_G$ that assigns to each finite group $G$ its group algebra ${\mathbb C}_G$ over ${\mathbb C}$, embeds the category of all finite groups into the category of finite dimensional Hopf algebras, so that the Pontryagin duality functor $G\mapsto\widehat{G}$ (for Abelian finite groups) turns into the operation $H\mapsto H^{*}$ of taking the dual vector space (which is a duality functor in the category of finite dimensional Hopf algebras).

This observation is used as a key example in different modern duality theories. I wonder

who first noticed this?

Kirillov does not give the name. 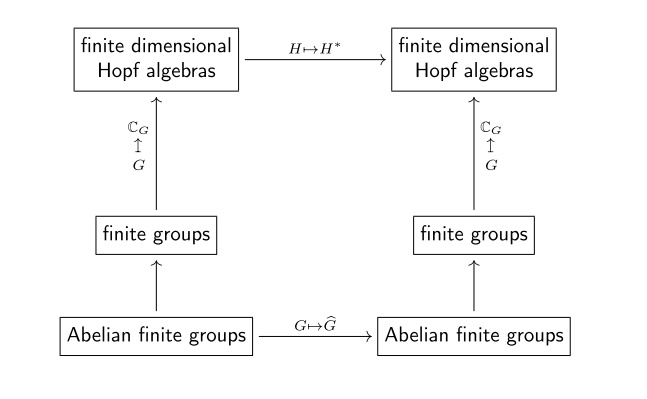 35
Tannaka formalism and the étale fundamental group
8
Koszul duality and modules over the Chevalley complex
10
Tannaka duality for C*-algebras?
30
Can one explain Tannaka-Krein duality for a finite-group to ... a computer ? (How to make input for reconstruction to be finite datum?)
3
Algebraic Groups, Modules, and Comodules
3
How well is the classification of low-dimensional semisimple Hopf superalgebras (or braided Hopf algebras) understood?
4
Krein's theorem in the Tannaka-Krein duality
Question feed