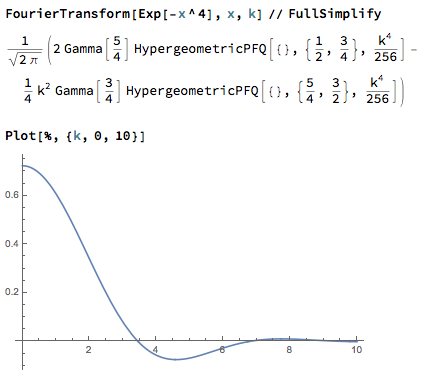 A simple argument that the Fourier transform cannot be nonnegative for any $m>1$, integer or not, is given in my 1991 paper with Odlyzko and Rush:

1) The nonnegativity of $3 - 4\cos \theta + \cos 2\theta$ is also a key ingredient in the proof of thenonvanishing of the Riemann zeta function $\zeta(s)$ on the edge $s = 1+it$ of the critical strip, and thus of the Prime Number Theorem. See the last exercise of this chapter my notes on analytic number theory.

2) Sergei noted that it is also known that for $0 < m \leq 1$ the Fourier transform is positive. As I wrote earlier this year on Math Stackexchange, the same paper with Odlyzko and Rush also proves that fact as follows, crediting the argument to B.F. Logan (see Lemma 5 on page 626).
We first prove this for $m=1$, then reduce $0<m<1$ to this case. For $m=1$, the function $\exp(-t|\xi|^{2m})$ is a Gaussian, and thus so is its Fourier transform; Gaussians are positive everywhere, so the case $m=1$ is done. For $0<m<1$, the function $\exp(-t|\xi|^{2m})$ is a nonnegative mixture of Gaussians $\exp(-c\xi^2)$ by Bernstein's theorem. Therefore the Fourier transform is also a nonnegative mixture of Gaussians, so again positive everywhere. QED

It might be good to also give the gist of Levy's very simple argument: if the Fourier transform was positive then the exponent would be the log-moment generating function of a random variable $X$. But if $m>1$, the second derivative at the origin vanishes and thus also the variance of $X$. The positive function would be a delta function which is a contradiction.

This is a well-known problem, solved recently in dissertation of Zastavny based on some inequalities for p.d.f. More: it is a Schonberg problem, positive for $0<m\leq1$, not positive otherwise.