Most of the lectures and lecture notes on Cluster Algebras (at least from Combinatorial point of view) start with mutations of the diagonals of a convex n-gon (mostly the pentagon) as the illustration of creating the new cluster variables using the Ptolemy's theorem, which also manifests other fundamental properties, such as positivity and Laurent phenomenon. (For example this http://arxiv.org/abs/1212.6263.)

Although I imagine one could address this question via the generalization of cluster algebras to other oriented surfaces with boundary, I was wondering if one could start with an arbitrary n-gon (not necessarily convex) and proceed from this point.

For instance, if one just deflates pentagon to an appropriate 5-gon, there are some diagonals without any flips and consequently the number of clusters we get would be different, so the cluster algebra varies and seems to be dependent of the deflation we apply to a fixed n-gon.

Is there any written work on this naive idea of generalization of cluster algebras from convex to arbitrary polygons, approachable for non-experts?

Here is one figure from the paper based on the non-convex octagon $P$ shown: 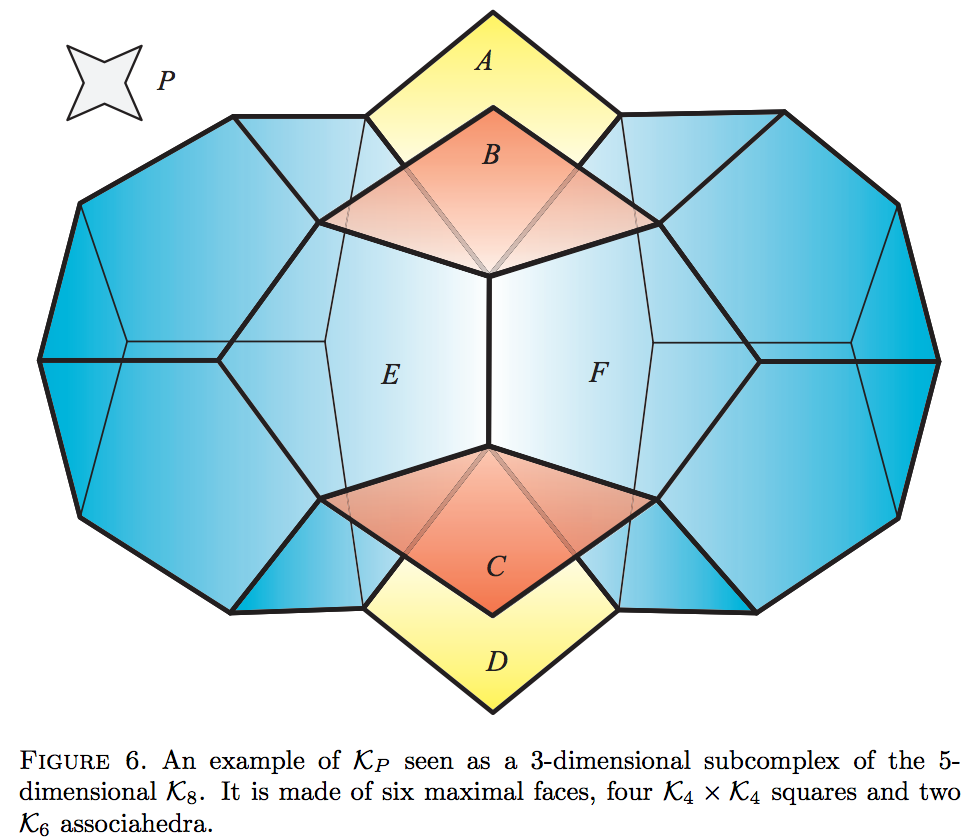 I see that there is another paper on roughly the same topic, but I haven't looked at it:

Perhaps others will have suggestions, but I'm not aware of any cluster algebra papers that tackle this situation in the way you suggest.

One should be able to handle "diagonals without flips" as frozen variables (also called coefficients): one simply can't mutate there. Then, for the purposes of the cluster theory, all the action happens on the mutable bit, which I suspect simply corresponds to "trimming" the polygon to something convex. (This is a very rough idea in my head and might well be wrong...)

Something similar happening in nature can be seen in some work of mine with Sira Gratz (http://arxiv.org/abs/1212.3528), where we look at triangulations of an infinity-gon (in principle, a convex one). In that situation, you can get arcs that are not mutable and they then appear as coefficients, as I say.

In Fomin, Shapiro & Thurstons paper called Cluster Algebras and triangulated surfaces Part I: Cluster Complexes they consider the surfaces up to homeomorphisms. So wheter you consider a convex polygon or a deformed one does not really matter.

Furthermore if you leave one diagonal fixed, you could regard it as a boundary splitting the polygon into two smaller ones. The corresponding Cluster Algebra then would be the product (as in Fomin and Zelevinsky's initial paper Cluster Algebras: Foundation) of those two I guess.