Is there a convex polyhedron $P$ that has among its shadows regular $n$-gons for each $n \in S$? Does such a $P$ exist for every $S$?

By shadow I mean the orthogonal projection of $P$ onto a 2D plane, for example, the shadow on the $xy$-plane, with $P$ above ($z>0$) that plane and the light at $L=(0,0,+\infty)$. By "among its shadows" I mean that you can rotate $P$ as you wish, and the goal is to find orientations of $P$ that cast the requisite shadows. What shadows are cast at other orientations is not relevant.

I believe the answer to my question is No. But the answer is Yes for a (seemingly minor) variation of the question, exactly the same except that the light is not infinitely far away, but rather say it is at $L=(0,0,h)$, so that the projection is central projection from $L$ rather than orthogonal projection, and one can translate and rotate $P$ (or equivalently, move $L$ and the projection plane around). Then one could build a $P$ for a given $S$ as follows. Let me use $S=\{5,7,11\}$.

Form $P$ as the convex hull of a regular 5-gon, a regular 7-gon, and a regular 11-gon, stacked in parallel planes, each scaled so that the hull includes all the vertices and edges of each regular $n$-gon:

Then placing $L$ just above the center of the pentagon produces a regular pentagon shadow, moving $L$ straight up enough yields a regular heptagon shadow, and raising $L$ high enough vertically, a regular hendecagon shadow. It seems not difficult to extend the construction to any $S$.

But I cannot see how to accomplish this with the light at $L=(0,0,+\infty)$. My first idea was to arrange the regular $n$-gons roughly as inscribed in longitudinal great circles of a sphere, so that rotating $P$ on a North-South "spit" will project each in turn. 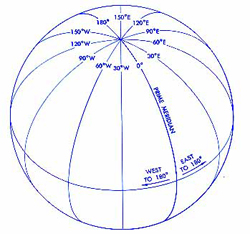 But I think this approach succeeds only with $S$ of small cardinality.

[This question is a small bite out of an earlier MO question, "What is determined by the combinatorics of the shadows of a convex polyhedron?", and it can be viewed as a lower-dimensional version of another MO question, "Are the Platonic solids shadows of 4-polytopes?".]

Either a construction of a $P$ for any $S$, with $L=(0,0,+\infty)$, or an argument why this is possible only for some $S$, would be much appreciated. In fact, a single counterexample $S$ would enlighten. Thanks for ideas!

Addendum. Here is an illustration of the elegant idea of Andreas Blass, for regular 4-, 8-, and 12-gons (blue, green, and red respectively): 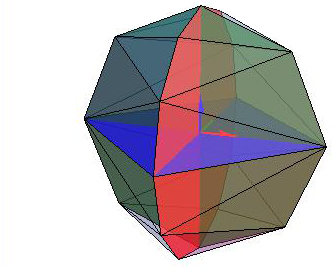 His construction raises interesting questions. Can any three regular polygons be achieved as shadows (without the (mod 4) restriction)? Is there another construction that achieves more than three regular shadows, for perhaps similarly restricted $n$-gons?

I'm answering only an absurdly small piece of the question, in the hope that this $\varepsilon$ isn't exactly 0. I claim that if $S$ consists of just three numbers, each divisible by 4, then there is a convex polytope in $\mathbb R^3$ whose orthogonal projections to the three coordinate planes are regular polygons (centered at the origin) with the prescribed numbers of sides. Instead of describing the desired polytope $P$ directly, I'll describe its polar polytope, $Q$, the set of points $q$ in the dual vector space such that $(q,p)\leq 1$ for all $p\in P$. The orthogonal projections of $P$ to the coordinate hyperplanes have as their polar polygons the corresponding intersections of $Q$ with the coordinate hyperplanes. So I want those intersections to be regular polygons, centered at the origin, with the prescribed numbers of sides. There is still some freedom about the size and orientation of these polygons, but here I'll make very simple choices. In each of the three coordinate hyperplanes, inscribe in the unit circle a polygon of the desired number of sides, with a vertex at the intersection of the circle with each coordinate axis. (This uses that the number of sides is divisible by 4.) Let $Q$ be the convex hull of the set of all vertices of these three polygons. What needs to be checked is that the intersection of $Q$ with any coordinate hyperplane, say the $x$-$y$-plane, is the polygon that we put there, not some superset resulting from the convex hull of what we put into the other two coordinate hyperplanes. Fortunately, this follows immediately from the following observation: If you take the convex hull of the union of the unit circles of the $x$-$z$ and $y$-$z$-planes and intersect that convex hull with the $x$-$y$-plane, what you get is the square whose vertices are the intersection points of the $x$ and $y$ axes with the unit circle. (Proof of observation: The whole convex hull of the union of the two circles, if projected into the $x$-$y$-plane, gives the convex hull of the union of the projections of the two circles. Those projections are the segments, from $-1$ to $1$, of the $x$ and $y$ axes.) Since the polygon we want in the $x$-$y$-plane includes the square, that polygon is the intersection of the $x$-$y$-plane and $Q$, as required.

Note that, since I took the three polygons that generate $Q$ to have the same circumradius, their polars, the projections of $P$, will have the same inradius.

I've decided to expand my comments into a challenge. Hopefully those with the skills and interest will take it up and provide some definite answers for Joseph.

Take two polygons (with two distinct numbers of sides) T and S. For me it is helpful to think of T as a square and S as a triangle, but you are welcome to choose your two favorite polygons. Consider normal vectors in R^3 to each of these objects, and set the normal of S to be part of the z-axis. Compute the set of all vectors v in P(S,T) such that if the normal of T has the same direction as v, the intersection of the two cylinders induced by S and T and the normals is a set that has the desired shadows as indicated by the normals.

The idea now is that one can define a disk on a sphere through whose center passes the normal of S, and serves as a guarantee that the shadow of T will not be found by orienting the normal of T to pass through the disk.

My belief is that these disks are large enough to allow an estimate that looks like "If S (where now S is the finite set of integers in Joseph's post) has n+3 numbers less than n^2 , The polygons of S cannot all be realized by a single connected convex polytope in R^3".

The challenge is to compute the size of these disks for many pairs S and T.

Not the answer you're looking for? Browse other questions tagged mg.metric-geometry convex-polytopes or ask your own question.

17
What can be said about the Shadow hull and the Sight hull?
15
Are the Platonic solids shadows of 4-polytopes?
9
What is determined by the combinatorics of the shadows of a convex polyhedron?
4
intersection of convex and non-convex polyhedra
8
Polyhedra that combinatorially shadow a sequence
26
What's that shape? Inferring a 3D shape from random shadows
5
Differentiability of polytope shadow areas
1
The relationship between facets of an inscribed polytope and those facets' shadows
3
Shadows and planar sections of polyhedra
Question feed