I recently learned the following rather fun game: a group of people is standing up roughly in circle, facing each other. Then participants randomly join hands, in such a way that nobody holds its own hand, and that everybody hold hands with two distinct person.

The result is clearly a link, and the goal of the game is to untangle it, i.e. participants have to move while still holding hands until they can stand up in (possibly several !) circle(s) holding hands with their direct left and right neighboors. Obviously people are allowed to not face the center of the circle (or to be upside down, I guess) so that the first Reidemeister move is allowed, but I guess it's not really important.

Clearly it requires quite some physical and intellectual skills, a lot of collaboration between the players, and a rather long time, which makes it a fun activity, and I recommend trying this at home with friends or at work with fellow mathematicians.

The person who explained the game sweared that it "always works", although it's fairly easy for someone having heard of knot theory to come up with an example where it doesn't. For example the trefoil is easily obtained already with 3 players, but it's also clear that this correspond to a rather particular choice.

In fact, this one time we actually did not manage to untangle the link though we managed to simplify it a lot. Of course even if the link is mathematically trivial it might be physically challenging to actually untangle it, but let's ignore that.

Basically, this game can be formalized as a process which generate links randomly, and I'm curious whether something interesting can be said about it. I must admit that since this question did not actually come up in my research I haven't given much thought about it.. Obvious questions are: can every link be obtained this way ? If not do they correspond to a known family of links ? Is there any way to support the organizer's claim, ie is there a way to estimate the probability of getting a trivial link ?

Yes, every link can be obtained in this way. Here's an inefficient way to do it. Put the link in braid form (via Alexander's theorem); suppose that we have $b$ strands. We'll achieve each braid generator as a certain pattern among $2b$ people on the circumference of the circle.

Here's a picture that explains better than my words can. All the horizontal (red) strands pass over the vertical (blue) strands. The two half-flips introduced cancel each other out (though they conjugate the braid generator) and we can clearly make all braid generators (and join them together!), hence all links. 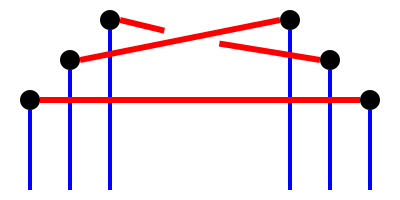 With a little more thought we can arrange the half-flips and modify the generators accordingly to eliminate the factor of 2, giving a quantitative (though not at all sharp!) bound of $\mathrm{min}_{\hat{b} = K}\mathrm{length}(b)\mathrm{width}(b)$ for the number of people needed.

Not the answer you're looking for? Browse other questions tagged knot-theory puzzle popularization or ask your own question.

55
Kirby calculus and local moves
23
Utility of virtual knot theory?
125
Are there any very hard unknots?
10
Is there a table of (fibred knot) monodromies?
2
Regular projection of a link, proof in the smooth category
4
How disconnected can a Seifert surface be?
4
Normal form of framed links under Kirby moves
Question feed